It would seem the 1980s have come back with a vengeance, whether judging from the work of a growing number of historians investigating the decade, or pop culture.[1] My personal favourite of such popular reincarnations is the acclaimed Netflix original Stranger Things. The series unabashedly borrows from the 1980s to achieve its unique aesthetic, drawing on themes and plot lines familiar to anyone who’s watched A Nightmare on Elm Street (1984), Firestarter (1984), The Goonies (1985) or Stand By Me (1986). This is in addition to a brilliant typography that will genuinely thrill Stephen King readers.

Stranger Things is more than simply a salute to 1980s film and fiction, however. It also seems to capture memories of the eclipsing Cold War and the anxieties it unleashed, as well as the cultural conservatism, militarism and sexual discrimination of the era. The series references the controversial revelations of long-term CIA-funded experiments with LSD on non-consenting individuals in both Canada and the US.[2] It signals at the growing fears over U.S. military intensification under the Reagan administration, as well as government secrecy and surveillance in that period that seemed to mark “a return to the Cold War after the years of the détente.”[3] Combined with the homophobia of the villains in the series, as well as the conspicuously queer-like character “Eleven”, it also suggests the ongoing sexual policing in the 1980s, and the different ways people were forced to navigate their way around it, and sometimes outright resist.[4] When Eleven’s newfound friends dress her up as a “girl” before she goes out in public (reminiscent of a similar scene in Steven Spielberg’s E.T.), it serves as one of many moments when this theme rises to the surface. Here it becomes clear that the source of Eleven’s ‘strangeness’ is not merely the fact that she can throw moving vehicles in the air like miniature toys, but because she does not conform to normative conceptions of appropriate girlhood. 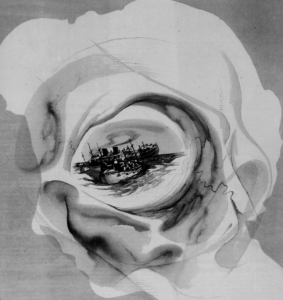 “Do Women Have a Sixth Sense?” news clipping from the Hamilton Collection, University of Manitoba Archives

The series’ attention to the paranormal also reflects 1980s preoccupations. One of the best-known parapsychology laboratories closed in 1965 at Duke University after its founders, Joseph B. and Louisa E. Rhine, left the institution.[5] But rather than end their pursuits, the Rhines literally crossed the street and established the Foundation for Research on the Nature of Man and the Institute for Parapsychology, which continued even after the death of the Rhines in the early 1980s to eventually become the Rhine Research Centre. Meanwhile other university-funded endeavours of a similar nature at Stanford, the University of Virginia and Princeton soldiered on into the 1980s. In 1985, the University of Edinburgh established a Chair of Parapsychology, which soon led to the founding of the Koestler Parapsychology Unit. All of these different institutions reflected a persisting interest in the powers of mind and the possibilities of other dimensions that, in turn, seeped into the surrounding culture. The iconic popular manifestation of this interest was, of course, the 1984 film Ghostbusters, co-written and starring Canadian actor, Dan Aykroyd whose father, Peter Aykroyd was a devout spiritualist.[6]

Stranger Things mirrors back this 1980s history. The series, after all, is premised on the idea that another dimension, called “the upside down”, has been opened through the telepathic and telekinetic faculties of a young girl. The primary villain even resembles J.B. Rhine. A deeper analysis of the character Eleven uncovers further linkages to this past. Being a child and female, she matches the profile ascribed to psychics and mediums since the nineteenth century that continued to resonate with twentieth-century psychic investigators and parapsychologists. The fact that others find her gender uncomfortably ambiguous makes these parallels more apparent. Those who were believed to have paranormal powers were also often identified as sexually subversive and transgressive. Would-be investigators responded by oppressively and sometimes even violently controlling their bodies.[7]

Stranger Things is not a transparent historical reflection of the 1980s, of course, and this may be one more reason why the series is so appealing. The female characters are much stronger and balanced than what one would find in the majority of 1980s films. Neither does the series unquestioningly replicate the sexual bigotry of that era. Instead, “Homophobia is the real monster in Stranger Things,” as journalist Daniel Reynolds describes, which the main protagonists must fight against. Stranger Things presents an oddly rosier image of the 1980s as a result – this despite the fact that it prominently features a terrifying creature from another dimension.

[5] R. Lawrence Moore, In Search of White Crows: Spiritualism, Parapsychology and American Culture (New York: Oxford University Press, 1977), 202-203. For anyone who is enthusiastic to pursue a much-needed update to this history, Duke University still holds a large collection of the records accumulated from the Parapsychology Laboratory.

[6] See Peter H. Aykroyd’s colourful history of spiritualism, A History of Ghosts: The True Story of Séances, Mediums, Ghosts and Ghostbusters (Rodale, 2009), with a foreword written by Dan himself.

One thought on “The Upside Down of 1980s Culture, Gender and the Paranormal: An Historical Analysis of the Netflix Series Stranger Things”