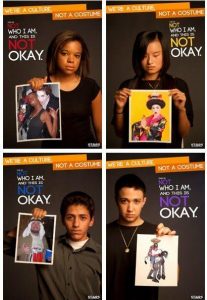 Each year at Halloween my partner and I hand out candy to a couple of dozen neighbourhood kids. We live in a working/middle class neighbourhood in Kingston where most of the children are white, as are their parents. I’m always anxious before opening the door to that first trick-or-treater. Who’s going to be the first Osama Bin Laden or any number of other racialized caricatures? But it hasn’t happened, not once in four years. That doesn’t mean it won’t next year, but I’ve yet to have a “wtf” moment at my front door—save for the non-costumed twenty something year old who asked for candy this year.

So, I have a stock of WTFs in the bank. It’s a good thing, too, because I need them for when I go to my job as an adjunct instructor at Queen’s University–especially around Halloween. This year a bunch of what-appears-to-be-mostly-white students have made national headlines (yet again) for dressing up in various racist costumes. Once again, Queen’s administration is scrambling the PR department to spin away from the familiar tale of this university, to quote an old friend, being not a haven for the “best and the brightest, but the richest and whitest.” I remember that line well, it comes not from 2016, but from late 2005 in response to a young white Queen’s student who wore blackface and called herself “Miss Ethiopia.” Ten years at Queen’s provides some powerful entries (the “Cowboys and Indians Kegger,” for example)[1] into what some of us might call its race archive. My WTF moments are much fewer and much farther apart than for my colleagues who do not inhabit my same identities—straight, white, and male. But racist Halloween costumes have a way of not passing you by easily. For those of us who have been around this campus a while, this moment should not be “a shocker.”[2]

In 2006, before Principal Woolf arrived, we at Queen’s were discussing the impact of the Henry Report, an investigation into the root causes of Queen’s failure to retain faculty of colour. A causal link was drawn between this failure and the university’s “culture of whiteness.” As then Vice Principal Patrick Deane remarked, “Is there a culture of whiteness? Yes, in the sense the university mirrors the Anglo-centric culture that dominates much of Ontario – but for the intellectual good of the institution, that’s just not enough to be acceptable.”[3] The attendant response was framed as an issue of diversity, that Queen’s lacked a critical mass of faculty and students of colour and Indigenous faculty and students to make the campus climate more hospitable.  The past ten years, however, have demonstrated a very clear fact, one that many Indigenous and racialized faculty members, staff and students have been voicing for a long time. It is not their job to be the conduits by which a “culture of whiteness” is reshaped into something more equitable for all involved. Diversity does not solve this problem. White faculty also need to name and challenge the very structures that privilege our existence. That structure, for me, is called White Supremacy.

I am done saying that this Halloween is another example of “white privilege.” It’s time to more forcefully name the structures and ideologies of power at play here. Students adorning such racist costumes, without any fear of significant reprisal, to inflict pain without fear of consequence even when the person you’re mocking might be mere feet away, THIS is White Supremacy in action. It is violent. We need not fear that whatever sickness has taken over our American neighbours is going to find its way here. It already has. It was born here too. It is evident in the ways some students behave and in the way Queen’s is attempting to distance and divest itself from this situation.[4] It is a failure of Queen’s leadership to enact meaningful structural change over the past ten years. “Diversity talk” is not an “end goal,” it’s time to name and dismantle the supporting structures of white supremacy. As Man Booker prize winning writer Marlon James recently remarked: “Maybe we will stop failing so bad at true diversity when we stop thinking that all we need to do is talk about it.”[5]

As I walk home tonight I wonder why it has been so difficult for some university students to learn the simple lesson that those five and six year olds who took candy from my hand at Halloween seemed to so easily understand–that dressing up as a “racialized other,” mocking another culture, is wrong, whether you get caught or not.

Scott Rutherford holds a PhD in History from Queen’s University, where he is Adjunct Instructor in the Department of Global Development Studies and in Cultural Studies.

[4] Principal Daniel Woolf is quoted as saying that he first needs to “determine” whether or not these are Queen’s students, as though if they are not then this is not Queens’ problem, Paradkar, “After Queen’s University student party, keep calm and call it out.”

[5] Marlon James, “Why I am done talking about diversity,” October 20, 2016: http://lithub.com/marlon-james-why-im-done-talking-about-diversity/