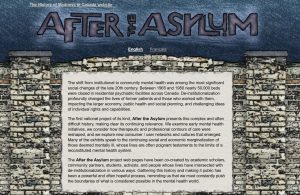 The shift from institutional to community mental health was among the most significant social changes of the late 20th century. Between 1965 and 1980 nearly 50,000 beds were closed in residential psychiatric facilities across Canada. De-institutionalization profoundly changed the lives of former patients and those who worked with them, impacting the larger economy, public health and social planning, and challenging ideas of individual rights and capabilities.

The first national project of its kind, After the Asylum/Après l’asile presents this complex and often difficult history, making clear its continuing relevance. We examine early mental health initiatives, we consider how therapeutic and professional contours of care were reshaped, and we explore new consumer / user networks and cultures that emerged. Many of the exhibits speak to the continuing social and economic marginalization of people deemed mentally ill, whose lives are often poignant testaments to the limits of a reconstituted mental health system.

The After the Asylum/Après l’asile web pages have been co-created by academic scholars, community partners, students, activists, and people whose lives have intersected with de-institutionalization in various ways. The new exhibits are part of the existing History of Madness in Canada/ Histoire de la folie au Canada maintained and housed by York University, and will be augmented in early 2017 with the internet release of History in Practice: Community-Informed Mental Health Curriculum/ Histoire en tête: sagesse communautaire et apprentissages, an innovative set of post-secondary teaching resources.

Grouped into four categories, the website explores elements of

Within these topical clusters are a rich and compelling array of exhibits. The bilingual Deinstitutionalization Postcards is a scholarly study that takes visitors through the dissolving walls of thirteen Canadian psychiatric hospitals in the late institutional era. Survivor Culture celebrates the diverse and unfettered “mad” cultural expression that has been a feature of post-institutional consumer and survivor communities, while Working Between Mental Health Worlds provides a rare glimpse into what the shift from institution to community meant to psychiatric practitioners.

As this expansive trajectory suggests, within the first few years of developing our respective projects, persons with lived experience of mental health difficulties became more than just project research subjects, emerging as collaborators and co-authors. We began practicing a different kind of history, initiating a process where academic team members took on the roles of listeners, learners and facilitators, while elevating the roles of community actors and letting them set much of the research agenda. Project products became more diverse, growing from a thematic academic journal issue to include a documentary film, a national conference bringing together academics and community activists, the After the Asylum/Après l’asile website, and a teaching website that harnesses stories from the past to train future mental health practitioners. Working alongside our community partners, we began to co-create a history of deinstitutionalization closely connected to community and with a strong public purpose.

The After the Asylum/Après l’asile exhibits demonstrate this commitment to making public the voices, contributions and perspectives of people whose lives were directly and dramatically reshaped by deinstitutionalization. Crafting a Life after the Asylum describes the careful and courageous adaptation of Doreen Befus, a former inmate at Alberta’s notorious Michener Centre, to a new, non-institutional life. The French/English An Activist and an Academic tells the success story of an “unlikely marriage of academic expertise with street-level experience” between social worker and scholar Nérée St-Amand and community activist Eugène Leblanc. The Politics of Art at PARC uses art made by members of this vibrant – and vital – Toronto organization to explain how one community has responded to de-institutionalization over the past forty years.

After the Asylum/Après l’asile and its associated projects disrupt tidy narratives, academic discourse, and top-down analyses. Gathering the history of deinstitutionalization and making it public through working collaboratively with people who hold stories of this important historical shift has been a powerful and often hopeful process, but one that reminds us that we must constantly push the boundaries of what is considered possible in the mental health world.

2 thoughts on “After the Asylum/Après l’asile: Launching a History of Survival”