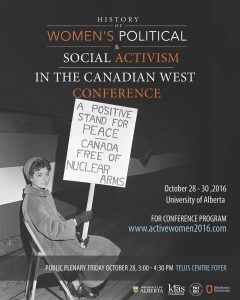 E. Cora Hind, first-wave feminist and famed agricultural journalist, was never one to back down from a fight. In the 1930s, the septuagenarian recommended reforms to a federal cabinet minister. The Canadian politician quickly dismissed Hind’s suggestions, much to her disgust. “This merely shows his colossal ignorance of the whole situation,” Hind later wrote in one of her bestselling books. “He is dead now, but I have no doubt his evil influence on that subject has lived after him.”[1]

When we reflect upon women’s activism in the Canadian West, Ella Cora Hind ticks so many boxes: a good friend of Nellie McClung, she was a proponent of women’s suffrage and advocated relentlessly for women’s vocational training. Hind was also a renowned agricultural authority. She was a ubiquitous presence at producers’ meetings, conferences, trade shows, agricultural fairs, and experimental farming stations. From the late 1890s onwards, Hind spent weeks surveying Prairie crops and interviewing farmers for the Manitoba Free Press. Her published predictions were consistently more accurate than government surveys and other experts. And they made her famous, so much so that Hind was dubbed the “Oracle of Wheat”.

The Manitoba journalist leveraged her fame by pressing international agrarian experts to answer questions from her extensive readership. They in turn avidly followed her Free Press columns, which became a clearinghouse for new advancements in crop science and pressing agricultural issues such as rust-resistant crops, dry farming, irrigation, plant breeding, and pest control. Through her bestselling books and a steady stream of newspaper articles, Hind reached thousands of Canadians. Through her international travels and support for the British imperial project, she met many more people and imparted a very specific view of what it meant to be a farmer in the Canadian West. Hind’s stories erased Indigenous Canadians from the Prairies even as they supported and promoted particular notions of farming, modernity, and technological innovation.

Concerned that agriculture had become too focused on profit, Hind challenged increasingly powerful narratives about the ability of technology to improve lives of rural prairie families, particularly women. At the same time, she celebrated the use of fertilizers and other chemicals, farm mechanization, large-scale mega-projects and, most emphatically, scientific crop breeding. Her columns document ongoing, complicated tensions between small-scale farming, technological innovation, and state interventions in rural life.

I first came across Hind’s work as an undergraduate more than a decade ago, and I continue to be amazed at the breadth of topics she addressed. In particular, Hind’s two bestselling books, My Travels and Findings and Seeing for Myself, are engaging accounts of her 1935-1937 world tour to assess agricultural conditions in more than two dozen countries for the Free Press. The books are an eclectic mix of tourist adventuring, celebrity hobnobbing, scientific networking, and amateur ethnography. They recount meetings with Rudyard Kipling and the British royal family; they also range to fashion, food, and precarious airplane journeys. The books are speckled with observations about everything from home design, to architecture, flower gardens, women’s consumer issues, and abortion in the Soviet Union. Hind’s books defied any gendered division of topics: a reader interested in her assessment of Australian sheep, for example, also had to parse her in-depth reflections on Scottish women’s footwear and female representation in Glaswegian local government.

Hind successfully advocated for her constituency: Western Canadian farmers. Indeed, Hind’s “Grand Tour” was borne out of her concern for rural women in Western Canada (primarily Euro-Canadian women). Back in Manitoba, Hind had witnessed firsthand the devastation wrought by the Great Depression. She reasoned that investigating markets for Canadian wheat and advances in agricultural science could help Western Canadian farmers survive and flourish. The “Oracle of Wheat” recommended that Canada cease to expand wheat crops, particularly when other countries were producing so much. Instead, Hind concluded that Canadian governments and farmers should collaborate to better market Canadian wheat and other new products. At the same time, Hind relentlessly lobbied for the inclusion of women farmers, researchers, and leaders in the growing network of exports she profiled and supported. But there were silences, too: the journalist effectively ignored non-white communities in her narratives, along with the urban poor and those oppressed by the British imperialist project she regularly defended.

Dr. Anne Dance is a visiting researcher at the University of Ottawa. She would like to thank the organizers of the Active Women conference along with her wonderful co-panelists, Laura Larsen and Katherine McKenna.