On the shores of Lake Mindemoya, Alan Corbiere talked about how Nanabush escaped from the Haudenosaunee by running up the length of the Saugeen/Bruce Peninsula and paddling across Lake Huron to Manitoulin Island. In the local coffee shop that graciously played host to so many of our group’s participants for our week-long stay, Bill Fox provided the archaeological evidence of the extent and intention behind Anishinaabek mobility throughout the vast Great Lakes Basin. In that same space, Anong Beam explained the process of pottery crafting, highlighting the uniqueness and place-based qualities of clays with which she and her family have worked – revitalizing a tradition of Anishinaabek ceramic-work, the very existence of which many have sought to deny. At a campsite near the shores of Providence Bay, laughter and stories moulded new friendships together. And, in the Ojibwe Cultural Foundation (OCF), Michael Belmore told us about the conversations occurring between the elements in which he works to produce art that embodies spirit as a way of being. 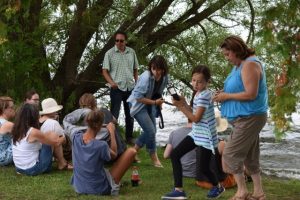 For myself, I will remember the Manitoulin Island Summer Historical Institute as a space – or, better, spaces – teeming with relationships, connectivity, and care. First and foremost as modeled by the Anishinaabek peoples who hosted us in their territories, on the island of the manitous; and, in particular, of the generosity that was shown to us by M’Chigeeng First Nation in opening the OCF to us.

Most of all, I appreciate being given the chance to look at the world and at my scholarship in a different light. My own discipline, political science, has a particular penchant for working with – indeed, depending upon – various models of containment. Inside/outside models of sovereignty, discriminative notions of citizenship, and atomistic ideas about identity formation – to name just a few – typify the normative models of thought in contemporary political science. So much so, that they tend to reassert themselves even in works that claim to criticize these models.

Much of my research to date – beginning in my MA thesis and moving into my present doctoral coursework and comprehensive exams – has explored the political relationship between settlers and Indigenous peoples. And I have, for a host of ethical and pragmatic reasons, been quite explicit about limiting my work to how this relationship manifests itself on the Saugeen/Bruce Peninsula. For a long time this seemed to be a ‘natural’ choice, as a peninsula does appear to be a bounded location. But what MISHI has brought home so clearly is that this sense of boundedness that my scholarship tacitly relies upon in developing it’s focal point, is ultimately constructed and self-imposed. 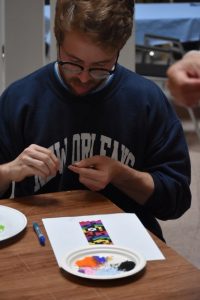 As each of the flashes of memory with which I opened this commentary come back to me, it becomes clearer and clearer that life on the Saugeen/Bruce Peninsula has never been bounded. Moreover, that sense of boundedness is likely itself a product of the very thing that I had sought to critique: Canadian colonialism. The Bruce/Saugeen Peninsula is, in truth, only a bounded community to the degree that one chooses to treat the Counties of Bruce and Grey as the definitive description of this place. But the knowledge shared with us at MISHI is plain evidence that, since time immemorial, the Anishinaabek have lived in webs of relationships that reach much further and run much deeper than those that I’ve been privileging in my own scholarship.

What’s more, Michael Belmore’s work embodies the fact that those relationships are not merely human-to-human or sociological relationships. He brought forward to the MISHI group the fact that conversations are occurring between a host of elements, and that we can be invited into those relationships – indeed we likely already have been, even if we don’t recognize it as such. Again, in terms of my own scholarship, while I have made efforts to think the relationship between colonialism and space, it has not been in a way that insufficiently centres the agency, power, and spirit of the non-human (a phrase which I use here while still recognizing the truth of Deborah McGregor’s assertion that such language is ill-equipped to actually describe or honour the alterity of what isn’t human). 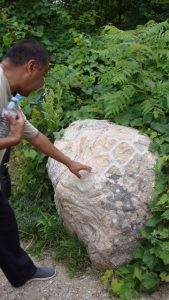 Michael Belmore explains a piece in his embedded exhibit “Replenishment.”

In coming to Manitoulin and M’Chigeeng with the MISHI group, I have learned about so many connections – direct and indirect – between that place, the Saugeen/Bruce Peninsula, and even further beyond, that my thinking can no longer remain as strictly bounded as it has been in the past.

This is not to say that I will be abandoning my research on the Saugeen/Bruce Peninsula – far from it. But it does mean that while working in that place, I must strive to centre a whole host of relationships that reach much further than the shores of the peninsula. For instance, drawing the resistance of Saugeen Ojibway First Nation to the proposed deep geological repository for reactive materials at Bruce Nuclear into conversation with the work that elders at M’Chigeeng to halt fracking off the shores of Manitoulin, and highlighting the responsibilities that both communities are fulfilling in their relationships to the waters of the Great Lakes.

These sorts of connections – and, frankly, these sorts of threats from industry – serve to bind together an uncountable number of locations and persons – human or otherwise.

Thank you MISHI, and miigwech to all the community members at M’Chigeeng and the OCF – especially to elder Lewis Debassige – for having me at this event and for helping to shape this critical new cornerstone in my thinking.

Phil Henderson is a doctoral candidate in Political Science at the University of Victoria, where he is also completing the Indigenous Nationhood Certificate program. Phil’s research focuses on the intersections of settler colonialism and neoliberalism; in particular, how these regimes co-constitute and reinforce one another. He investigates the growing sense of settler anger in the age of neoliberal restructuring and the ways in which this anger deepens settler investments in processes of colonial (dis)possession. His research focuses on the territories of the Saugeen Anishinaabek, also known as the south-western Ontario riding of Bruce-Grey-Owen Sound where he and his family live as settlers.