My childhood summers were spent on the shores of Lake Huron, visiting my grandmother in Amberley.  Together with my brother, we would explore the woods and play by the water’s edge, collecting shells and feathers, and listen to the stories told by those around us.  We learned about the Clay Pond, and the Clam Pond and why they were important for us.  We learned how to watch, and respect the power of the Lake.  And we learned the names of important landscape features around us, becoming more familiar with them, having them become more a part of us, with every telling.  At the end of the summer, we would go back to the city, but the feathers and the shells in our pockets would continue to connect us to our place, and remind us of what we had learned, and of who we were.

But there are always new stories to hear and new places to learn about.

For while I had learned from my grandmother about the places and things we could see, the Ponds, the Lake, and sites in the landscape, she never shared stories with us about the places and things we couldn’t see, the spirits, the emotions, the presence of history, the myths that are real.  This cultural knowledge is not often shared.  When it is, it is usually quickly dismissed by western science.

One new story I heard on Manitoulin Island described a place, a mythological place, south of Manitoulin Island on Lake Huron, where Caribou could be seen walking on water, following a trail, through the middle of the Lake.  Alan Ojiig Corbiere, Nde doodenid (M’Chigeeng First Nation) explained that the ancestors told this story in the past, and used it to teach young trackers about an ancient Caribou hunt.  A mythological hunt, in a mythological place.  Shared today within communities, this type of cultural knowledge can connect people to places, as stories and memories that reinforce belonging and identity by bringing the past to the present, transcending time.

But this story described a real place where Caribou walked on the water, a real trail, a real hunt.  A story easily dismissed by western science, until five years ago when archaeologists found stone hunting blinds and chipped stone debris along an underwater ridge that connects Amberley with Alpena in present-day Michigan. 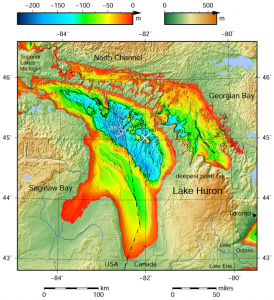 Archaeologist Bill Fox from Trent University explained to us that nine thousand years ago, Lake Huron was seventy-six metres lower than it is today, as water was trapped in ice-age glaciers, and the two hundred kilometre ridge connecting Amberley with Alpena would have been exposed, creating a land bridge across Lake Huron used as a corridor for Caribou on migration.

Caribou walking on water, following trails, through the middle of the Lake.

Now when I look out across Lake Huron, I see a history I didn’t know before, a history that my grandmother also didn’t know, but one that was kept by knowledge keepers further north. 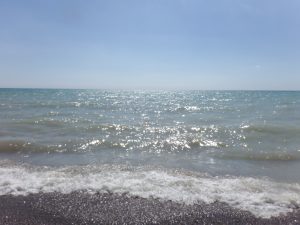 Amongst others, Linda D. Smith argues in Decolonizing Methodologies that a “mix of science, cultural arrogance, and political power continues to present a serious threat to Indigenous peoples” (1999: 99), and she sees (post-) colonialism as an uncompleted, perhaps impossible project.  Whereas singular perspectives on the world, such as those driven by western science, create oppression and discrimination, much as colonialism has in its attempts to maintain a singular social order “by means of force and law, suppressing the diversity of human worldviews” (Little Bear, 2000: 77), Indigenous worldviews situate perspectives and practices in ongoing negotiations and re-negotiations with ecological knowledge, cosmological knowledge, historical knowledge, and experiential knowledge creating ethical spaces, or places.

Places where Caribou walk on water.

Such places have the potential to become political for Indigenous peoples and their allies, as well as to help others begin to shift away from the quick dismissal of Indigenous Knowledge, and away from the dominance of western knowledge so often found within colonial settings.

During the week I spent on Manitoulin Island with the Manitoulin Island Summer Historical Institute, I met thirty-one knowledge sharers, all working at the intersection of Indigenous and western knowledge, all of whom taught me something new.  By opening up these ethical spaces and by being open to the politically important ideas shared within, real change can happen.

Katie MacDonald, who holds a PhD in Geography from York University, has been working on issues of Indigenous governance, self-determination, cultural resurgence, and rights to traditional lands through community-driven research mainly in the Northern Amazon region in South America and is working as a resident lecturer in the School for Field Studies – Perú, Villa Carmen Biological Station. She sent her childhood years on the shores of Lake Huron, and her research is shifting to this region.