[S]pace is a continuous area or expanse which is free, available, or unoccupied… [whereas place is] a particular position, point, or area in space?a linear and general perspective, particularly as it relates to time… Space, then, is an empty generality; however, place is particular, it is storied, it is experienced (Styres 45-47).

Such a distinction draws attention to the significance of particularity in the 2017 Manitoulin Island Summer Historical Institute’s (MISHI) guiding question: “does wisdom sit in places?” Instead of an abstract inquiry into relations between location and knowledge, this question called me, and all of MISHI’s participants, to engage with the wisdom that sits in Manitoulin in particular.

Iethi’nihsténha Ohwentsia’kékha embodies principles, philosophies, and ontologies that transcend the material construct of place. With this understanding in mind, Land is spiritual, emotional, and relational; Land is experiential; Land is conscious?Land is a fundamental living being (47; Styres’ italics).

Such understandings of Land call for more deeply developed relations with Manitoulin, likely deeper than would be possible over the one week of MISHI, though perhaps MISHI might serve as a starting place for prefiguring processes for engaging with Land, building relations with Land, and learning with Land.

One of MISHI’s great pleasures was how the rocks, waters, winds, trees and other plants, animals, etc. of Manitoulin contributed to the presentations and teachings: seeing the carved boulders of Michael Belmore’s art installation, Replenishment, alongside the rocky (is)landscape of Manitoulin upheld and invigorated his themes; by utilizing Manitoulin’s rock in his artwork, Belmore tells a story of land and art in mutual replenishment, beyond the art’s pictorial stories concerning fish and turtles.

After Alan Corbiere and Lewis Debassige shared how the name and shape of Mindemoya serve as reminders of stories that tell of the formation and history of Mindemoya, Manitoulin, and the Great Lakes region beyond, daily drives past Mindemoya continually reminded me of where I was, and the deep (spiritual) history of Manitoulin.

William Fox brought to mind how we were continuing a long history of residence in the Providence Bay area of Manitoulin by bringing us to an ancient village site not far from where many of us were camping for the week, and taking us to find rocks used to make arrowheads on a beach many of us frequented in our own time, although colonial injustices and dispossession certainly contributed to how I arrived there, now.

Something particularly stands out to me about remaining with the Land even in our ‘downtime’: most nights I reflected on the days’ teachings while swimming in the waters off Providence Bay, the water’s force on me driving home the point that the land of Manitoulin cannot be separated from the waters of Lake Huron, and that I was but a small thing immersed in the interplay of the two.

At the end of the week, Carolyn Podruchny gifted each of us with a turtle made of sweetgrass, which she had bought on the island. Carolyn mentioned that part of her reasoning for choosing turtles is their place as translators between worlds (water and land, spiritual and ‘physical’; see, for instance, Basil Johnston, 53), and how we, MISHI participants, are all translators by working to bridge knowledge between academia and communities, settlers and Indigenous peoples, etc. 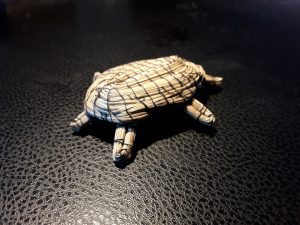 I appreciate this idea of being translators and feel it can contribute to understanding engagement with Land, especially building off ideas from Deborah McGregor’s MISHI presentation, given below Dreamer’s Rock.

McGregor’s presentation reminded me of conversations we had in her course “Reshaping Research with Indigenous Peoples.” In this course we addressed academic research ethics when working with Indigenous peoples and communities, but McGregor also asked us to reflect on where our personal sense of ethics and morality sit against institutional protocols for ‘ethics,’ and on our own personal epistemologies?our understandings of knowledge, and how/if we can know that we know something.

When Western academics bring knowledge from Indigenous communities into academia they are not creating that knowledge. They are, perhaps at best, translating it from one site to another?at worst, colonially extracting it.

If, as McGregor promoted in her MISHI presentation, we do not center humans, and if we recognize that Land too is agential,[2] then I feel that we ought to understand that Land too possesses knowledge, in which case, when is ‘knowledge creation’ ever not translation?

Biology is translating the stories told by living beings and their parts; physics, translating the movement and interaction of physical bodies; chemistry, of chemical elements, etc.?the entities being studied always already hold the knowledge that humans take from them, and ‘discovery’ is just translating that knowledge so that humans may access it more readily. And aren’t the theories and analyses of social sciences and humanities just ever-developing stories to explain how/why things happen in certain ways?

McGregor’s MISHI presentation got me thinking, if taking knowledge from Indigenous communities is at best translation, and at worst violent extraction, then is the same true when taking knowledge from Land? What would ethical research mean and look like with Land, as Styres describes it? What would I need to do in order to go to Dreamer’s Rock and not just extract knowledge, but get consent to translate knowledge (for academia)?not only consent from Whitefish River First Nation, where Dreamer’s Rock sits, but from the Land itself?

At the end of MISHI, the Ojibwe Cultural Foundation gifted us with posters which state “The Voice of the Land is in Our Language.” I have heard similar understandings shared by different Indigenous peoples, and have thought about how Western understandings of human and language development (based in Western science, anthropology, history, etc.) might tell such a story, alongside Indigenous worldviews and spirituality. 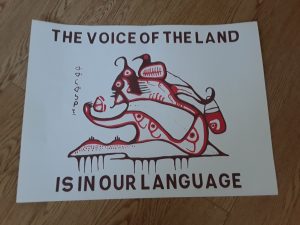 Anishinaabemowin has developed as a way to communicate alongside and within the physical geography of the lands of the Anishinaabe: forests, rocky lakes, rivers, etc. What is needed to communicate in such a place differs from what is needed to communicate in, for instance, a desert. The pitch and tone of languages must respond to the things that surround them: the winds that will carry them; the rocks, waters, trees, landscapes, etc. that they will resonate with and against. Certain environs might require a loud language to speak over other sounds; other environs a quiet language to drift along; some, sounds held deep in the throat; others, sounds flicked lightly off the tongue. Anishinaabemowin has developed in intimate connection with the lands of the Anishinaabe; the voice of Manitoulin is in Anishinaabemowin.

Such an understanding raises interesting ideas regarding my questions of gaining consent to translate the knowledge of Land. If you can speak the language of a Land it is likely easier to translate that Land’s knowledge, and to ask for permission to share that knowledge. Learning the Indigenous languages of Lands might be something to aspire to, for settlers to build meaningful, ethical, and just relations with Lands, and to find ways of living on these Lands as something other than colonial settlers. In immediate practice, however, pushing for settlers to learn Indigenous languages might reify colonial privileges, marginalizing Indigenous efforts and opportunities to learn their languages.

Much has been written on the interplay of language and worldview: how different languages express different visions of the world, and can aid in seeing the world in different ways (see, for instance, Styres, Robin Wall Kimmerer, Shawn Wilson). Throughout MISHI, Alan Corbiere repeatedly mentioned how Anishinaabemowin utilizes root ideas, and adds prefixes and suffixes to add context and create meaning for those ideas?things in isolation say little; one needs to see what things are related to, and how they are in relation, in order for their stories to come out. Even without sharing a language, taking inspiration from Anishinaabemowin and reflecting on how we are in relation with diverse aspects of Land–that we are always in relation, and are little without our relations–may help us to speak with Land, learn from its knowledge, and explore how to engage with that knowledge with respect and ethics.

Ben Kapron is a doctoral candidate in Environmental Studies at York University. He studies settler decolonization, Indigenous worldviews, human/ nature relationships, ethics, and environmental philosophies. He plans to to focus his studies on the Anishinaabe lands which he has lived —  Baawitigong/Sault Ste. Marie, Nogojiwanong/Peterborough, and Tkaronto/Toronto.

[1] “Iethi’nihsténha Ohwentsia’kékha is a Kanien’kehá:ka (Mohawk) word meaning “our Mother the Earth” . . . [and] includes the sky (cosmos), the earth (urban and rural), waterways (including oceans, rivers, lakes, coastal areas; as well as reservoirs, aqueducts, culverts, and drainage basins in urban centres), humans and non-humans?near and far” (Styres 38).

[2] Agency is defined in different ways, in different contexts and disciplines. In describing Land as “agential” I mean to say that elements of Land (animals, plants, waters, rocks, winds, etc.) have capacities to act with intention and purpose, and to impact the world around them. Legal/political understandings of agency may declare that while this philosophical capacity to act may be true, Land lacks agency by being excluded from dominant legal/political systems.