This is the second in a five part series featuring the Lost Stories Project.

I played a lead role in the Lost Stories episode Qamutiik: From the North to Ottawa’s Southway Inn, serving as associate producer of the film. Due to this involvement, whenever I watch it I am able to see what sits just off the screen, somewhere outside the frame. There were moments, people, and things related to this project that were never filmed or were edited out. For whatever reason, knowing what is outside the frame affords me a unique viewing experience, and it is one I will share here.

I do so for two purposes: First, I want to shine some light on how doing public history is hard, often slow, and almost always unpredictable work. There are confines – budgets, deadlines, and often contracted “deliverables” – but the journeys taken in making public history projects, such as Lost Stories, create moments of both challenge and opportunity that no amount of planning can predict. And, secondly, I want to share a glimpse of personal experience that I hope enriches what you see when watching the film, and that underlines how the sharing of interpretive authority and resources produces effective and affecting public history.

Other than filming done at the home studio of the project artist, Couzyn van Heulven, I was on set, not only to make sure things went well but also to learn more about how a documentary film set operates. What I did not expect, was that I would become so involved:  I conducted interviews along with Mosha Folger, our film’s director, and also with Christina Williamson, our project’s facilitator. I scouted locations with both Mosha and Couzyn, and all along, I never stopped pestering them with questions about their respective crafts:  Why that kind of camera?  Why that weld on the sled’s joint? I lugged camera cases, found extension cords, and even dug up some stones from the back of the hotel’s property that we were able to use to create a base for the art’s installation. Mosha and Couzyn were more than kind. They each taught me how much of art and storytelling is “doing the work” and how comparatively little is “inspiration.” The latter is not inconsequential, but for both of them it pales to the labour they invest in making beautiful, inspiring things.

On the set at the Southway Inn. From left to right: Couzyn van Heuvelen, Steven Zlepnig (whose family owns the property), and Mosha Folger. Courtesy John C. Walsh.

Here is an example of a different kind of lost story that epitomizes this reality.  As we were installing the sculpture, a process shown briefly in the film, I asked Couzyn if he had any unexpected challenges in getting the piece ready.  “Not really,” he told me casually, but then confessed, in an equally nonchalant way, that he had not slept for the past 24 hours because he decided to re-do the handles on the luggage that sit on the qamutiik (the Inuit-designed sled) because, he said, the originals “didn’t look quite right.” To make this minor, but to him essential change, required a night of design, moulding, cooling, and installing. It was a change nobody sees in the film and, I suspect, unless I had asked, nobody would ever learn. For Couzyn, this was all just part of doing the work. Indeed, he seemed bemused as I, ever the learned scholar, followed up by asking him, “why?!” 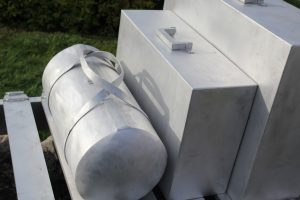 The editing suite is, as John Greyson has argued, a “falsehood factory.”[1]  By this he means all the cuts, splices, dissolves, and narrative framing involved in telling a story on screen.  Greyson goes even further than this, though, pointing out that how documentarians conduct their research is also a series of edits, of choices being made, often of opportunities far beyond their control. As a historian, I know the same goes for historical writing. Authors stitch together fragments of the past bequeathed to the present through “the archive,” itself a factory of edits, based on a selection process that the author hopes and the reader trusts to be not arbitrary but rooted in reason and context. Historians and documentary filmmakers are each very much in the business of producing truths from our factories. In our case, the truth that Mosha sought to tell was less about the past of the Southway Inn itself, but more about the various pathways of travel that made the hotel one node, a gathering place even, in a wider network of movement for Inuit peoples.

Mosha brought an early cut of the film to Carleton to show me the truth he was assembling in his factory. He did this in part to think out loud about doing the work – reflexivity is good for the artistic and intellectual soul, after all – but also out of a spirit of generosity. He wanted to know what I thought and how I was responding to his work. Nothing was more important that day than what appears in the film from just past the 15-minute mark to just past the 16-minute mark.

It is a scene in which Couzyn reflects on the politics of “tradition” in Inuit cultural production, something that is both celebrated and challenged in the commemorative artwork he is making. The raw footage of this moment is telling: there is a silence that lingers for several seconds after Couzyn explains why all this frustrates him, not for himself so much as for Inuit culture more broadly. Mosha and I both felt this was a critical moment for the film, but, if the scene lingers too long on the silence, is it overselling the truth of the message?  Too short, and does the scene fail to deliver this message and its associated meaning? That we spent so long on that one specific editing choice showed me how much labour is hidden off screen. It was also, again, an unexpected and unplanned moment that provided me with a learning and life experience I would not otherwise have.

Of all the collaboration, co-ordination, and consulting that went into this public history project, nothing was more important than the five Inuit women and men whose stories came to frame the work done by both Mosha and Couzyn. There are several moments in the film when the camera is my point-of-view, as I sat off camera asking questions and listening as Elisapee Sheutiapik, Mike Inukshuk, Sytukie Joamie, Ruth Kadlutsiak, and Julie Ivalu shared their memories of the Southway Inn, of Ottawa, and of the North.

More than once I laughed or excitedly followed up with something said in the interview, forgetting there was a film being produced and thus creating a problem later on for the sound.  (Sorry, Mosha!)  We sipped coffee and chewed on snacks in between filming, and in those moments, I continued to learn how much I did not know. Both while filming and while on break, there were times I sat very quiet, ashamed of my ignorance about the memories being shared, especially when those were expressed through stories about loss, struggle, and harm. I, the white settler from the South, was the other in these moments. It was a gift that each of them gave me and, with the film, they now give to others.

As much as I hope viewers of the film learn to appreciate how much of commemoration is really “doing the work” versus some moment of ethereal artistic inspiration, I also hope they are able to experience what I did when helping to make this film, and ask for, listen to, and act upon the stories that people share with them.

John C. Walsh is a professor of history at Carleton University. The four new Lost Stories films will be shown as part of a Lost Stories Film Festival during the Congress of the Humanities and Social Sciences at the University of Regina on May 28 (the first full day of the CHA) at 5PM in the Shu-Box Theatre (Riddell Centre –RC 174). The screenings will be followed by Q&A with members of the Lost Stories team. Refreshments will be served.

[1] John Greyson, “Mr. Blank Gets Concretized,” in Mark Cheetham, Elizabeth Legge, and Catherine M. Soussloff, eds., Editing the Image: Strategies in the Production and Reception of the Visual (University of Toronto Press, 2008) p.3