This is the third in a five part series featuring the Lost Stories Project.

Mamie Wong left Regina in 1947, never expecting to return. But this all changed when she learned a story about her father that had been largely lost to her family for decades and which is now featured both in a public art project by Saskatoon-based artist Xiao Han and in the Lost Stories film Yee Clun and the Exchange Café by Regina-based filmmaker Kelly-Anne Riess.

Yee Clun was a Regina restaurateur who came to the attention of historians — if not his own family — because of his role in the 1920s in challenging Saskatchewan’s White Women’s Labour Law. Legal historian Constance Backhouse has provided a detailed discussion of this law in her 1999 book, Colour Coded: A Legal History of Racism in Canada, showing how it was designed to prevent Chinese-Canadian businessmen (such as Yee Clun) from hiring white women.[1]

This was no small matter for Mr Yee given that in 1921 there were only four women among the 250 Chinese residents of Regina. The gender imbalance was a result of the discriminatory legislation of the time that worked against the immigration of entire families from China. It was through no fault of his own that Yee had no Chinese women to choose from, but this situation alarmed some Saskatchewan leaders who feared that sexual improprieties were inevitable if Chinese men were allowed to be in close contact with white women. As a result, the provincial law only allowed such hiring if the employer was able to secure a municipal license, and this is where Yee Clun became a public figure. 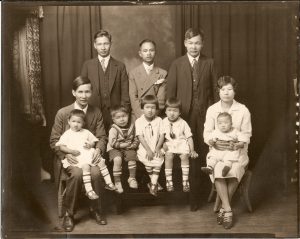 In 1924 he submitted an application for such a license, in order to be able to hire white waitresses for his Exchange Café. The hearings — that Backhouse has recreated — make great reading, and challenge any simple division on the matter on either racial or gender grounds. Although the law had been put in place to make life difficult for Chinese businessmen, Yee had the support of some of Regina’s leaders, including the police chief, who recognized that he had been a good citizen for decades. On the other hand, some women’s groups came forward to oppose granting him a license, on the grounds that it would imperil young (white) women. In the end, Yee was denied his license by Regina’s city council, but the story does not end there, because he appealed the decision to the Court of King’s Bench, which struck down the law’s discriminatory provisions and ordered Yee’s license to be granted. Nevertheless, the law remained in force, albeit in an amended form, and was not repealed until 1969.

The Yee family ultimately left Regina, settling in the Vancouver area, where Yee Clun died in 1967, and for decades thereafter neither his children nor his grandchildren had any idea that he had the courage to challenge an explicitly racist law. Instead, one of Yee’s grandchildren, Clarence Sihoe, remembered him as “a quite presence,” someone who was always well-dressed, “climbing trees and pruning bushes in his three-piece suit.”

In the early 2000s, Clarence came across Constance Backhouse’s book, but his family’s connection with the story was still from a distance until the Lost Stories Project connected with them. Clarence provided us with an amazing cache of photos that became an important resource for the artist Xiao Han — a Chinese immigrant in her own right — who was selected to create a piece of public art to commemorate Yee Clun’s story in a park not far from where the Exchange Café had been located.

Her installation was based upon photographs that she staged in which she played all of the roles, part of her practice of what she calls “self performance.” In this particular case, she played the role of both a restaurant owner and a waitress, both of whose faces were slightly covered to obscure their racial identities. In the case of the restaurateur, presumably Yee Clun, the face is covered by the page of a newspaper that contained articles collected from news coverage of his challenge of the White Women’s Labour Law. 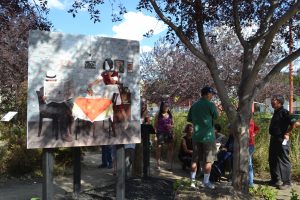 The family was more directly drawn into the project when Xiao Han visited Mamie Wong, her two surviving sisters, and the extended Yee family in Vancouver a few months before her installation was inaugurated during summer 2017, bringing with her a version of her project to get their reaction. And then twenty-seven members of the Yee Family, encompassing four generations and coming from a number of provinces, attended the inauguration. It was in that context that Mamie Wong returned to Regina after seventy years; and while there, she — along with the rest of the family — journeyed to the Regina Cemetery to visit the grave of Ruby, one of Yee Clun’s children, who had died in 1929 at the age of eight. I was honoured to have been with them on this emotional occasion. 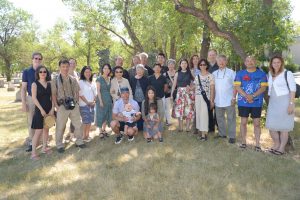 The presence of the Yees — facilitated by contacts provided by Alison Marshall, author of Cultivating Connections — turned the inauguration of Xiao Han’s artwork into a special event, but it could not have taken place without the support of the Chinese Cultural Society of Saskatchewan.[2] Like the Yee family, the Society — led by Victor and Kathy Chang — knew nothing of the story before we contacted them, but they were immediately inspired by the courage of this immigrant who challenged an unjust law. In Kelly-Anne Riess’s film, Kathy looks at Victor and asks, “Would you have had the courage to do that, if it happened to you.” Victor says nothing, but his look says that he hopes that he would have. Later in the film, reflecting on Yee Clun, he points to his heart and says, “It’s what’s  in here that counts.”

When the Lost Stories Project began, I always thought that we would be finding stories well known to particular communities, that we would help make better known to a larger public, but in this case, the process of discovery was perhaps most strongly felt by individuals — the Yee family and today’s Chinese-Canadian community in Regina — who were in a sense closest to the story, but had until recently known little about it. Their process of discovery was infectious for everyone connected with this particular episode, either in its production or by being in attendance at the inauguration events.