This post is part of a series, a virtual tour of the Depression-era Soviet Union, in part through the eyes of Canadians who traveled there and, in part, through Kirk Niergarth’s eyes as he attempted to retrace some of their steps during a trip to Russia in 2014. The previous installments are available here and here.

In retrospect, my linguistic preparation for my Russian journey was woefully inadequate.  My online “learn to speak Russian” lessons were not especially effective in real-world application.  Even when I could formulate an appropriate question I very rarely understand the answer without elaborate miming.

My limited ability to communicate with ordinary Russians was not unlike that of many Canadians who traveled to the Soviet Union during the Depression.  Some, such as Toronto social worker Margaret Gould, spoke Russian fluently; others, such as the agricultural expert Andrew Cairns, had enough knowledge of the language to engage in conversation. 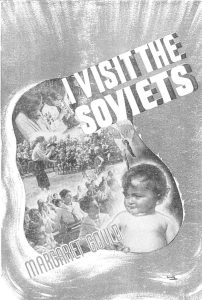 For most visitors, however, conversations with Soviet citizens were mediated by an interpreter or guide.  These guides in most cases, were provided by one of the Soviet tourist agencies, Intourist or VOKS. The scholar/journalist Ella Smith hired her own interpreter in England to travel with her for her second research expedition to the Soviet Union in 1932, but she was an exceptional case.

I had more conversations with other tourists with whom I took English-language guided walking tours than with ordinary Muscovites, comparing notes with a meat-packing executive from Italy, a crew from a Korean airline, and a honeymooning couple from England (odd as it might seem in retrospect, Eric and Josepha Adams of Montreal spent their honeymoon in the Soviet Union in the summer of 1934).

Certainly Canadian travelers in the 1930s were likewise sharing their experience with other tourists, whose expectations and impressions might influence their own.  Hugh Whitney Morrison of Edmonton, who went to the USSR during his studies at Oxford, traveled with a particularly rarefied crowd.  His party included:

“Professor Lloyd of London School of Economics… a Mr. Edwards – a simple bore with a good heart misplaced from Lancashire; two young English women:  Mrs. Lord-Phillips, the wife of a Guardsman and Miss Harley a daughter of one of the English country families….a young married couple – very sweet – the Bibbys – he is the ‘cattle-cake king’ of England:  it was positive hardship for both them….They are millionaires.”

Sometimes intercourse between fellow travelers was other than high-minded discussions about the prospects of socialism.  In 1937, novelist Hugh Maclennan wrote home to reassure his wife Dorothy Duncan:  “No I didn’t know that Jeanne had been in bed with Karl the first night they reached Leningrad… At least that is one ghost laid for you.  Jeanne would hardly have been equal to the two of us now, would she?”

The most memorable of the walking tours I took was the one entitled “Stalin’s Soviet Union” that began outside the Lubyanka, site of so many interrogations and executions.  Before we began, two men in militia uniforms strolled over to read what was written on the sign the tour guide was holding above her head and made some enquiries that I took to be about whether she was organizing a tour or beginning a protest.  This was not to be the only echo of an earlier era.  Our guide was a university student, arrived in Moscow after growing up in Siberia.  She had no recollections of the Soviet Union herself, but had heard about hard times from her parents.  In several ways, she fit the profile of a VOKS or Intourist guide in the 1930s, who were often female university students and members of the Komsomol (youth wing of the Communist Party) who would have been toddlers at the time of the revolution.  Of his guide in 1935, Frederick Banting wrote, “I wish very much that I did not have to leave Moscow.  The little guide – Miss Emily Charmack is a fine intelligent girl….She has read Scott, Dickens, Shakespeare and has even tried Chaucer – fancy these people reading such things.” 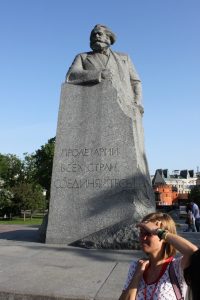 The statue of Marx across from the Bolshoi theatre was a stop on the Stalin’s Soviet Union walking tour in May of 2014. Our guide is pictured in the foreground.

My tour’s progressive narrative arc was parallel to an interwar one.  The interwar guide would have pointed to the dark Csarist times, noted the current improvements and pointed to a bright future.  In 2014, the dark times were Soviet ones, the signs of present prosperity (and conspicuous consumption) the positive steps forward.  My guide did not, however, as her interwar counterpart would have, offer any prognostications of dizzying future success.  I assume, as well, that she did not file a report on my comments or character after the tour concluded.

The archives suggest that VOKS guides were most likely to record favourable impressions about Canadians who were favourably impressed by the Soviet Union.  These Canadians were deemed to be “serious” persons.  Of Banting, his guide wrote that he “looked like a serious person…. He said that the USSR is the most interesting country in the world, which has a lot to learn from it.” McGill professor Frank Scott also impressed his guide:  “He is of radical conviction, is fond of the Soviet Union. Scott said that the program that the Intourist had created for him satisfied him….Scott is a serious, useful, and respectful person. We need to keep in touch with him, send him printed materials, etc.”

Soviet guides certainly influenced the progressive narrative of Soviet history that many Canadian visitors echoed to audiences at home.  Morrison described seeing a “superhuman effort to transform the most backward country in Europe.”  Maclennan thought one could “only marvel at the heroism of Lenin and his successors for tackling a task so stupendous and wish them well… No one who has not been here can imagine the utter wreck with which the Communists started to build.  Development seems very uneven; but here in Moscow it has been truly stupendous.”

Nothing symbolized the progressive narrative of a Soviet tour better than a stop at the site of what visitors were told would one day be the Palace of the Soviets.  Agnes Macphail, MP, explained on her return to Canada in 1936 how it would “rise to a height of 1,361 feet, topped by a colossal statue of Lenin.”  At the time she saw it, however, it was and would remain, an enormous hole in the ground.

Unlike the Palace of the Soviets, many construction projects were completed in the 1930s. For Canadians, there was a stark contrast between the frenetic activity they observed in the USSR and Canadian cities mired in Depression.  As CCF-activist Graham Spry put it,

Among the successful construction projects that most impressed Canadian visitors was the Metro, which was in Macphail’s words “the pride of every Russian.” 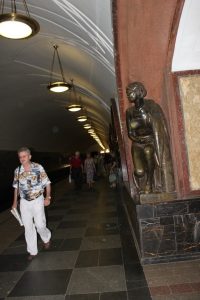 Inside the Moscow Metro, Mayakovskaya station, 2014.

For Maclennan, the new subway was “almost a work of art.  The workers feel they own these things, as in fact they do.”  A similar thought occurred to Scott as he sat in the rooftop restaurant of another major Stalin-era construction, the new Moscow hotel:

“At breakfast, looking onto the street and waiting to be served my omelette, compote and coffee, I noted that it was strange to look out of the window of this hotel and to know that everything about the square outside is public property; the Kremlin, the street-cars, the office buildings, the automobiles – and this hotel.”

The anti-Communist George Drew was not impressed.  “I can almost hear some enthusiastic Communist say, ‘But didn’t you see the new tube system in Moscow, the new Moscow Hotel, and the magnificent House of the People’s Commissars?’” he wrote.  “Yes, I saw them.  The House of the People’s Commissars is about the size of some of our smaller office buildings in Toronto, but is finished in beautiful marble….I not only saw it, but I stayed in the Moscow Hotel.  It is a ten-story structure, which would probably be classed as a cheap commercial hotel in New York.  It also has magnificent marble of different colours all along the front.  It was started ten years ago.  It isn’t finished yet. But already a stamp has been struck in its honour, glorifying this great event.”

Less hostile visitors were nevertheless struck by the contrasts they observed between these apparent triumphs of Soviet modernity and other, more ordinary aspects of Soviet life.  “Russia is a puzzle, a provoking sort of puzzle,” Macphail wrote. “Just when you think you have the thing going together, you find a few pieces that simply won’t fit in… Coming breathless with admiration and surprise from an inspection of the magnificent underground railway called the Metro, you come suddenly upon the street cleaners of Moscow, women with silly little brooms made of twigs, busily sweeping the overwide streets.  It is amazing!” 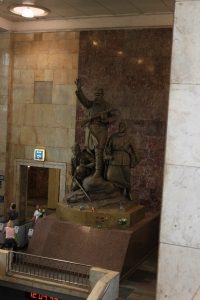 Inside the Moscow Metro, Partizanskaya Station, 2014.

Frank Scott was much less impressed with recently constructed Soviet housing than he was with the Moscow hotel:  “This morning we were taken (because we insisted on it:  Intourist not particularly liking the idea) to see the new homes for workers, attached to some factory on the outskirts of the city… Entered our first worker’s ‘home.’ It was a small apartment, two rooms and a kitchen. Three beds were in each room, and six people lived there.”  Scott was struck by the “complete absence of privacy.”  No wonder, he wrote, they needed easy divorce laws.

One thought on “A Provoking Sort of Puzzle:  The Narrative of a Soviet Tour”