Let’s begin with a question: without help from the internet, can you name the person who founded the city of Chicago?

I suspect that for many of our readers, the answer is ‘no’.

“Founders” are not terribly in vogue these days, anyways.

It was, however, the man who founded Chicago that helped me make a profound shift in how I teach Canadian history. Last month, at the Canadian Historical Association’s annual meeting, I presented about this curricular shift, arguing that people like Jean Baptiste Point du Sable, the putative founder of Chicago, help us rethink early North American history, moving us away from national frameworks. The feedback I’ve received since that presentation has been very fruitful and quite diverse, so I’ve decided to post the talk here to continue the conversation. 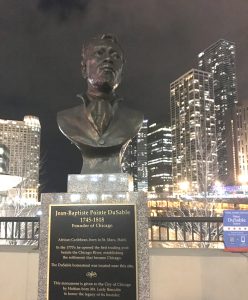 Bust of Jean-Baptiste Pointe DuSable, next to the DuSable bridge in downtown Chicago. (Photo by Groov3, Wikimedia Commons)

The life lived by Jean Baptiste Point du Sable has all the necessary components for the pre-Confederation Canadian History survey course. Though we know little about his early life, du Sable was supposedly born to a French sailor and an enslaved woman in the French colony of Saint Domingue around 1745; there is also an argument suggesting he was born in the St. Lawrence Valley. Regardless, he was well educated and, by the time concrete evidence emerges about his life, he was active in the fur trade. It was in that capacity that, during the 1770s, he met and married a Potawatomi woman named Kitihawa according to Potawatomi customs and then, years later, in a Catholic ceremony in Kaskaskia in the Illinois Country. By the 1780s Jean Baptiste and Kitihawa moved to the place known as Eschikagu (“the place of the bad smells”), today known as the north bank of the Chicago river, where they established a trading post, a mill, a smokehouse, and a workshop. The businesses they established brought them considerable wealth. In 1800, with the United States now claiming this place, Point du Sable sold his businesses and moved to French Louisiana. There the French governor commissioned him to operate a ferry across the Missouri River.

Here, in this one man’s life, we have seeds for much of what we teach in the pre-Confederation Canadian History survey course. His birth in French America provides an opportunity to discuss the French Atlantic and the integrated systems of American, African and European slavery. His entry into the fur trade and the relationship he struck with Kitihawa provides for discussions of kinship, gender, trade and religion; while also drawing attention to how – from a Eurocentric perspective – France controlled the two major waterways into the heart of the continent; providing good opportunity to circle back and emphasize that the French settlements at Kaskaskia were located on Cahokia’s fourteenth-century remains. And finally, their establishment at Eschikagu points to the development of infrastructure upon which the eastern settler colonial regime would be built and extend further westward.

I first discovered Jean Baptiste Point du Sable when I translated into English the lyrics to Webster’s song Quebec History X as part of an interview we translated from our partner site HistoireEngagée.ca. Indirectly, both the lyrics and the imagery in the video below call for our profession to change our practice, especially in the classroom.

Du Sable points towards one way we might effect this change.

In this man’s biography we have an opportunity to teach North American history without the constraints of more recent national frames, allocating more appropriate attention to North American, African and European influence.

Without taking this broader perspective, important histories like Jean Baptiste Point du Sable’s are lost. For me, as a professor of Canadian history, it is hard to incorporate du Sable’s story into the pre-Confederation Canadian History survey course. Yes, it allows me to address many important themes; but, if emphasized too strongly, his life story prevents discussion about the people and places that shaped Canada itself. Du Sable’s biography is only indirectly a Canadian one.

This is a problem that I have increasingly confronted in my teaching. As someone whose research is defined neither by colonial nor later national borders, teaching the pre-Confederation part of the survey has proven difficult. Borders, even between colonies, were relatively fluid for many of the people I study; they moved back and forth often and, for most of the Indigenous nations I focus upon, colonial and national borders sliced (and continue to slice) right through their homelands. Borders matter; but the lives of the people who crossed them (or whose lives were crossed by them) cannot be understood by focusing solely on one side or the other.

At Huron, I wasn’t alone in these feelings. Our Americanist, Nina Reid-Maroney, researches slavery and freedom in the lower Great Lakes. For the past decade, her American History survey course uses London and Chatham Ontario’s connections to the Underground Railroad as an entry point into nineteenth-century American history.

Wishing to move beyond the bordered implications of nationally-focused histories, we developed HIS 2710F/G: Red, White, Black, et Blanc: North America to the 1860s and changed our program requirements from requiring competency in three of four geographic areas: Canada, the United States, Europe and Global history to two of three areas: North America, Europe and Global history.

HIS 2710 is structured around an annual field school to Oberlin College in Ohio. Initially developed in Prof. Reid-Maroney’s slavery and freedom courses, this year we expanded the trip to focus more broadly on the Lake Erie borderlands, stopping at Wyandot Nation of Anderdon, to think about how peoples like the Wyandot navigated the comings and goings of imperial jurisdiction; we also added an assigned reading about French settlers along the Detroit River. The purpose of the trip, and the course more broadly, is to challenge students to think about the diverse meanings this space has for the peoples living along these waterways.

Though significant for our program at Huron, these changes to our curriculum are not that innovative.

In my last post on Active History, I went through all the first and second year course offerings available in English-language Canadian universities. Many history departments take an approach like the one we have adopted, moving beyond a national frame. Memorial, Saint Mary’s, Mount Alison, Bishop’s, Laurier and Brock all offer a similar course at the first-year level (Daniel Samson and I had a good Twitter exchange about this, you can read it here & here); Ottawa, Waterloo, and Laurentian offer similar courses at the second year.

More common are continental surveys of specific populations: Five schools teach Indigenous history from a continental perspective; a smattering of other courses are offered in women’s history, gender & sexuality, childhood and business. In total there are about 36 courses on the books in Canada that frame their perspective continentally, while there are 231 with Canada as the centre of attention.

What makes our decision innovative and, I think worth discussing, is that because we are small (a department of five) we have replaced the early nationally focused survey courses with this continental course. We haven’t just added, but we have taken away. Though, of course, there may be history departments that have also moved away from teaching the survey course in their practice, all history programs have some iteration of the Canadian History survey course on their books. Usually, but not always, these courses are broken down into pre- and post-Confederation (though there is surprising variety in the start/end dates and some schools, like the University of Ottawa, offer a suite of three or four courses divided chronologically).

In making this change, what we have done, or perhaps better put, are trying to do, is indicate to our students that there are other ways of thinking about this time and space. What happened before 1867 is important for understanding Confederation and what has happened since; it need not, however, be taught from within that frame. The life of Jean Baptiste Point du Sable demonstrates well that we can cover similar ground, preparing our students for more nation-state-focused courses in their future (such as U.S. post-Civil War and post-Confederation Canadian history), while also introducing them to the complex North American worlds of the seventeenth, eighteenth, and early-nineteenth centuries (many of which persist into the present). In other words, by decoupling this period from its defacto association with the nation-state, we are teaching our students to think like historians, assessing the past on its own terms.

It is from this perspective, that I want to end with another reason it is important to make this change in how we teach Canada’s past: nationally-focused histories can be offensive and alienating to our students. Though many of us try to prevent such consequences when we teach Canadian history, such challenges are hard to avoid when the nation-state remains the focal point, especially in the periods before the American and Canadian nation-states were created. With the dawning American and Canadian state as the inevitable ending point for this type of course, the content inevitably gravitates towards those white wealthy men who brought their British colonies together, leaving out the many crucial histories (and alternative geopolitical visions) that often defined this earlier period; the memories and legacies of which continue to shape our present-day social and political context.

When you try to balance this out by better representing women, Black, Francophone and Indigenous histories, the scope of this type of course inevitably expands beyond national borders and frameworks. Boundaries become blurred. It is time for a different perspective.

3 thoughts on “From Early Canada to Early North America: Why We Stopped Teaching History before the 1860s from a National Perspective”