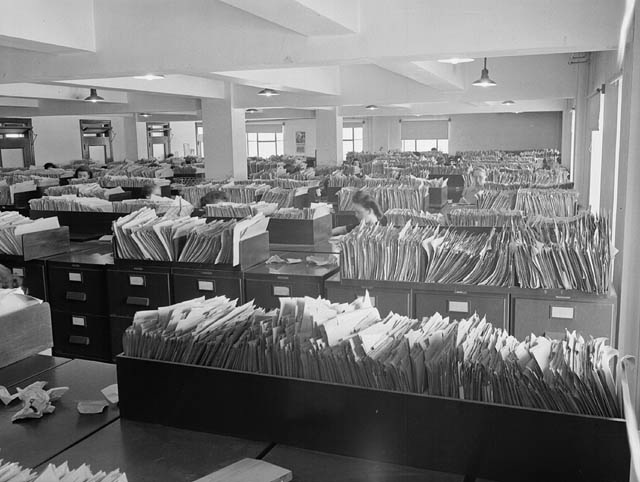 Wartime found Government employees working in poorly-lit, crowded offices such as the Records and Files Department of the Experimental Farm. Source: Library and Archives Canada/National Film Board of Canada fonds/a144872

In general, historiography and historical methods courses do a good job in teaching students to be skeptical of their sources. As undergraduate and graduate students, we learn to scrutinize what we read, hear, or see. Yet while historians may be familiar with how to critique the sources themselves, rarely do we look up from a given document and examine the place where it is located, or think about how the document arrived in the archives. This is particularly true of written documents that emerge from government. Historians do not always critically engage with the organizational structure of the files, or think about how a certain structure came into being. This might seem somewhat “inside baseball” to historians, who usually leave such concerns in the hands of archivists. Exploring organizational descriptions on archival websites is not for the faint of heart, and rarely make much sense to the untrained observer. But considering these issues is important, because the history of how government departments change over time influences how documents come to be organized, influencing the history that emerges from this research.

The history of Canadian Official Development Assistance (ODA) in Canada provides an excellent example of how this is true. Cranford Pratt, David Morrison, and more recently, Stephen Brown, have all written about the historical and current difficulties in maintaining policy coherence regarding Canadian ODA policies.[1] Political self-interest and/or ideology have often dictated the focus of Canada’s aid programs, and changes in government have naturally affected their policy priorities related to aid. Changing policy priorities have affected government’s organizational approaches as well. When Canada’s first major aid program, the Colombo Plan for Co-operative Economic Development in South and Southeast Asia, began in 1951, aid was managed by the department of trade and commerce, with significant policy direction from the department of external affairs and the department of finance. There were other departments involved in the technical assistance aspect of aid as well, including the departments of agriculture and national health and welfare. In 1960, the External Aid Office, located in the department of external affairs under a Director General, replaced this loose organizational structure. In 1968, Prime Minister Pierre Trudeau’s government founded the Canadian International Development Agency (CIDA). Of course, most recently, the Harper government did away with CIDA entirely, and integrated international development programming back into the much re-named foreign affairs portfolio, currently called Global Affairs.

Every researcher expects a learning curve when approaching a subject, but complicated organizational histories provide a unique challenge to researchers. For example, while the Record Group within Library and Archives Canada (LAC) pertaining to CIDA, known as RG 74, claims that it “consists of records created and/or maintained by the Canadian International Development Agency and its predecessors” [emphasis added], in fact, there is very little material within RG 74 pertaining to the pre-1968 era. The majority of that material is contained within the various departmental record groups. Knowing the organizational history of the subject is crucial to understanding where to locate the proper documents, and knowing how LAC organizes such documents is important to understanding where to find them.

Archivists, of course, are aware of these challenges. In addition to navigating the numerous logistical obstacles they face in appraising and providing access to an endless backlog of accruals and donations, archivists make every effort to help facilitate the discoverability of records in their custody through finding aids and informed reference service. 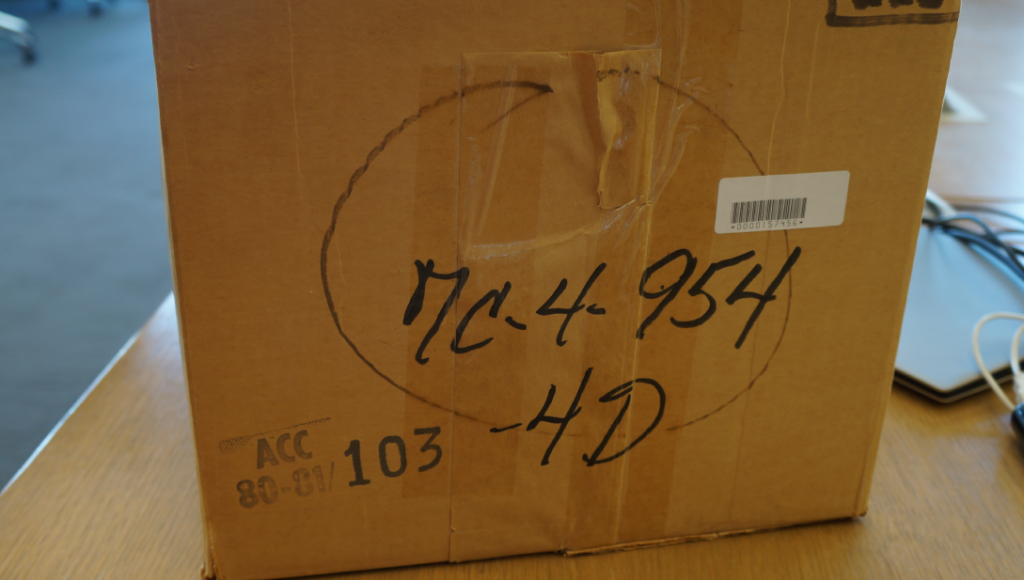 In the case of Canadian ODA records like RG 74, some of the trouble researchers encounter in archives stem from their efforts to identify a single grouping of records created by multiple entities over time, when in fact it’s quite possible no such group of records even exists. This is because archivists in Canada aspire to the principle of respect des fonds, the idea that “records of the same provenance should not be mixed with those of a different provenance.”[2] Since at least the nineteenth century, Western-trained archivists have traditionally endeavored to organize records in their custody around a common provenance or creator to protect their context for future researchers. Thus, with regard to government records, the principle of respect des fonds, theoretically, should stand: “A predecessor office should not be deprived of records it created; a successor should not have records ascribed to it that it did not create.”[3] However, as indicated in the description for RG 74, this is not always the case with complex, ever-shifting bureaucracies, causing headaches for archivists and historians alike. Indeed, the truth is, multiprovenancial record groups and fonds are a common occurrence in archives. What happens then when the provenance of a related set of records consists of numerous creators spanning several years? The query is not insignificant and how an archivist responds could influence a record’s findability.

Case in point: LAC’s early application of the record group concept. An American idea adopted in English Canada before the latter’s formal embrace of the archival fonds in the 1990s, a record group is, simply put, “a collection of records that share the same provenance and are of a convenient size for administration.” As some critics have observed, however, this tendency toward keeping record groups to a “convenient size” is loaded with trouble, particularly in the way it permits archivists to separate the materials of large agencies into smaller record groups thereby obscuring their provenance. To the average researcher, such parsing no doubt seems innocuous. Yet, this confusion is important because the artificial subdivision of records into manageable units actually has the result of removing records from their administrative context and thus rendering them harder to find. The emergence of born-digital recordkeeping and multifaceted modern bureaucracies has only exasperated this, making it difficult to distinguish between records created by a single agency and records created by multiple agencies and/or transferred to the archives by a separate controlling agency.

The substitution of the archival fonds for the record group in English Canada did not solve all these challenges.[4] Administrative changes in organizations complicates the task of arranging archival materials.[5] One way to circumvent this problem is to invoke “functional provenance” – the practice of arranging materials “by the activities that produce the materials (the function), rather than organizational unit” Put another way, arrangement rooted in functional provenance organizes records not by their creator, but by the activities that give rise to their creation. Arranging records in this way allows an archivist to maintain the administrative continuity of materials from departments and agencies whose titles and functions keep changing by organizing them according to their principal activities. Thus, in the instance of ODA, records would be arranged not by the department that created them but by the institutional activities and initiatives to which they document, such as capital and technical assistance programs.

The application of functional provenance as a methodology, is not universally accepted throughout the archival profession; in fact, most archives remain committed to arrangement by organizational unit – the traditional practice. Nevertheless, researchers interested in aid history should adopt a function-based mindset, especially when working with documents scattered over various record groups. Understanding not only the history of government departments, but how their activities change and evolve over time, can help identify potentially relevant records housed in seemingly unrelated record groups or fonds.

Knowing the organizational history of Canadian aid programs and relevant changes in timelines, as outlined above, is the first step. The fonds-level descriptions (consisting of administrative history, scope and content, arrangement structure, etc.) included on the LAC website are helpful in this regard, and the reference archivists at LAC are very good at showing the proper steps to obtain these on the searchable database. Adopting a functional approach to locate relevant information means taking into account both the likely location of documents as reflected by the organizational history, but also thinking in terms of the activity one is trying to uncover. For example, during her dissertation research looking at 1950s-era Canadian Colombo Plan aid programming in India, one of the present authors found that there was a range of information about specific capital and commodity projects located in both the department of finance and department of external affairs records. The research strategy lay in choosing appropriate search terms, while also trying to be as comprehensive as possible in her search activity. The point is to “think outside of the record group/fonds,” or, perhaps more appropriately, “think outside of the CIDA,” to ensure that the resulting material is as comprehensive as possible.

Knowing the history of the organization is essential to understanding where and how to look for material. Adopting a function-based mindset in approaching the archives puts the focus on the topic rather than the organization itself, which can be distracting. Also, understanding how to communicate one’s needs to the archivist, and taking the time to learn a bit about archival structures themselves, is important. Although not always viewed in this light, at its best, the historian-archivist relationship is a partnership – a collegial exchange in which each party is trying to assist the other in working toward a common goal: locating the best and most relevant records in and amongst a seemingly infinite number of possibilities. Appreciating this dynamic, and employing creative research strategies, will help both parties succeed in their goals.

Jill Campbell-Miller just completed an AMS postdoctoral fellowship at the Gorsebrook Research Institute at Saint Mary’s University in Halifax, and will begin a SSHRC postdoctoral fellowship at Carleton University in August. Her research interests include the history of Canadian’s involvement in foreign aid, development, and humanitarianism, with a focus South Asia. She is a founding member of the Canadian Network on Humanitarian History.

Ryan Kirkby is an Archives Associate at the University of Guelph’s Archival & Special Collections, and a practicing historian. He recently received the 2017 Charles DeBenedetti Prize in Peace History from the Peace Historical Society. His research interests include American social protest movements, the Vietnam War, the relationship between historians and archivists, and the benefits accrued from closer professional collaboration.

[3] Terry Eastwood, “Putting the Parts of the Whole Together: Systematic Arrangement of Archives,” Archivaria 50 (Fall 2000): 114.

[4] The differences between a record group and a fonds are beyond the scope of this article. Suffice it to say, unlike the record group, the archival fonds is more conceptual than physical, consisting of “[t]he whole of the documents , regardless of form or medium, automatically and organically created and/or accumulated and used by a particular individual, family, or corporate body in the course of that creator’s activities and functions.” Bureau of Canadian Archivists, Rules for Archival Description (Ottawa: Bureau of Canadian Archivists, Planning Committee on Descriptive Standards, 1990; revised July 2008), D-5.