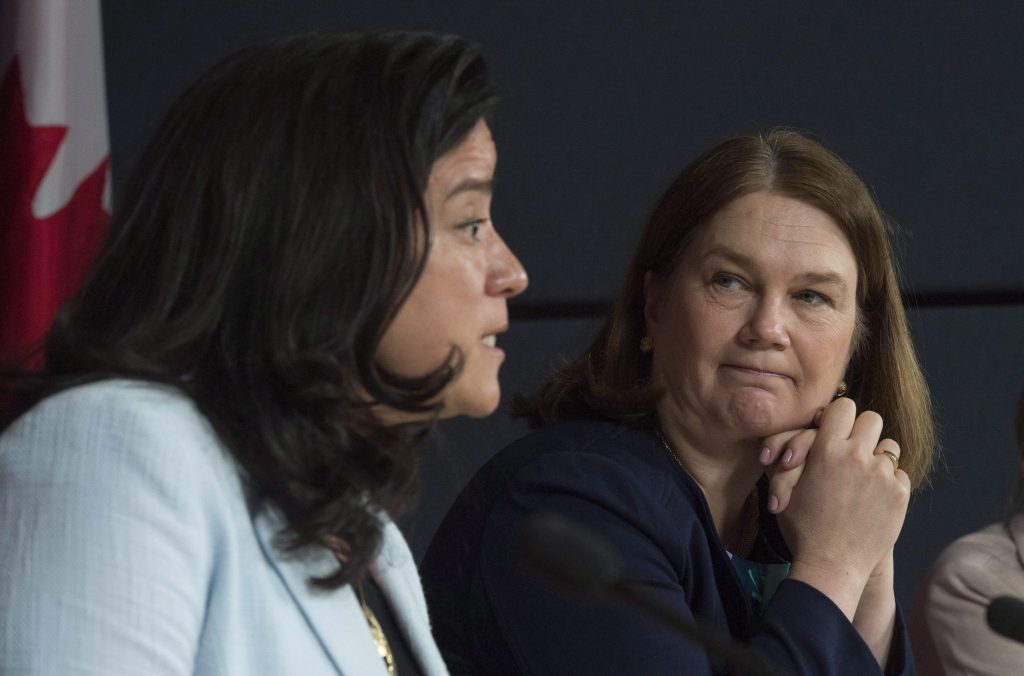 Political parties are contested spaces. Few know this better than Canada’s Liberals. Regularly derided as the party that campaigns on the left and governs on the right, that aphorism captures a long-standing split in its zeitgeist and membership. Since at least the days of Laurier and Mackenzie King, the party’s ‘left’ and ‘right’ wings have been regularly at war.[2] Most recently, the contest manifests itself in the resignations of cabinet ministers Jody Wilson-Raybould and Jane Philpott. As Monique Bégin’s 2018 memoir, Ladies, Upstairs! My Life in Politics and After, similarly demonstrates, the feminist liberal left can be a force to be reckoned with. Philpott’s hopes, summed up in the phrase which provides the title for these observations, match those of many feminist liberals.

Feminists have a long history of trying to force liberalism, which is sometimes credited with a ‘radical feminist future,’[3] to the left. Just as Wilson-Raybould, Philpott, and Bégin struggled for reform in times of uncertainty and protest, so did their suffragist predecessors. Activists such as Ishbel and John Gordon (the Aberdeens), Nellie L. McClung, and Mary Ellen and Ralph Smith likewise counted on progressive liberalism to combat extremes of wealth and power.[4] While they largely failed to see racial oppression, they intended a modern liberal state to serve as an instrument of justice for white women and workers and as an alternative to sex and class war. Until at least WWII, left and right wing liberals alike largely ignored or endorsed the exclusion of Indigenous peoples and most non-Europeans from the ideal body politic. Both Smiths, in their determination to exclude Asian immigrants, offer a reminder of the failures of the left, feminist and otherwise, regarding race relations.[5]

The British vice-regal aristocrats, the prairie writer and politician, and the BC lib-lab and ‘lib-fem’ politicians relied on the emergence of a progressive alliance, which escaped “clear ideological cleavage between liberal individualism and socialist collectivism.”[6] To this end, they supported a ‘big tent’ politics, just the kind of putative alliance invoked by liberal suffragists in general and Canada’s ‘Parliament of Women,’ the National Council of Women (founded, not coincidentally, by Lady Aberdeen) in particular.

Divides of gender and class, and potentially of race and religion, were, ideally, in the National Council and the country at large, to be bridged by adherence to a supposed common set of ‘human’ or ‘universal’ liberal values, notably individual merit, industry, and compassion. The limits of such a creed in countering personal and collective investment in the structural inequalities of patriarchy, capitalism, and colonialism did not, and do not, deter liberal left hopefuls.

Political pragmatism or, to employ their critics’ terminology, opportunism, encourages optimism. While anarchy and reaction are foreseen as the fruits of revolution, cooperation and lasting reform are to be the legacy of liberal gradualism and its hand-maiden, parliamentarianism. In 1919, as a new MLA, Mary Ellen Smith set out this standard:

Old inherited customs and artificial restrictions are gradually being relegated to their proper place, and women are slowly but surely climbing. There is room at the top, and she is getting there, getting there because of stern necessity on the one hand and wish to be economically independent on the other. [7]

Encouraged by the early 20th century Protestant social gospel’s faith in an essentially organic rather than a divided community, such left liberals drew heavily on the ‘New Liberalism’ set forth by British and Canadian political economists, such as L.T. Hobhouse and Adam Shortt.[8] This updated “traditional Liberal concerns for the individual, character, and freedom” to argue that “freedom required a greater equality obtainable only by interference with the capitalist market.”[9]

As the sympathetic Toronto Globe put it in 1916,

In this new fight for social justice and social betterment Liberalism has its place, its great and needed place, as surely as in the old fight for individual freedom. Industrial insecurity and unemployment, old-age necessities and the standards of health and of wages, the drink evil and the liquor traffic, and all such social problems which modern conditions have pressed to the front—with these the State must deal if the individual rights of freedom and equality for which the old Liberals made their fight are not to be utterly submerged in the hopeless abyss. And to be a slacker or a shirker in this new fight is to deny the faith of Liberalism and to dishonor its name.[10]

This reformed creed promised that liberalism could remain, as Ralph Smith argued, the “Eternal Enemy of Privilege.’[11] As such, it ought to be the proper home of feminists, organized labour, and everyone who endorsed the moral vision of the ‘fair deal’ or ‘fair play,’ set out by McClung in In Times Like These (1915).[12]

When they campaigned under the banner of the Liberal Party, the Smiths and McClung claimed the right of independence. As he transitioned from Labour to Liberal as a provincial and federal politician, Ralph Smith, like Britain’s Lib-Lab miner MPs he so admired, favoured the “radical wing of the Liberal party” and the removal of “liberals whom nature had never intended should be connected with the Liberal Party.”[13] When the widowed Mary Ellen replaced him as a Vancouver MLA in 1918, she crusaded as a “free lance,” an Independent candidate committed to legislation on behalf of women, children, and veterans. As she explained, “I can go the Liberal party one better. I am an out and out democrat.’”[14] By 1920, she had rejoined the left of the party. McClung was equally conditional in the course of the 1921 campaign which returned her as a Liberal MLA for Edmonton: “’There is no charm in regard to the name ‘Liberal.’” The party’s merit lay in its adherence to “progressive” politics. Otherwise she’d support the United Farmers, which formed Alberta’s government that year.[15]

In regularly distinguishing fundamental but nevertheless evolving liberal principles from the corrupt practices of some Liberal parties, such lefties maddened conservative colleagues. Like Wilson-Raybould and Philpott, the Aberdeens, McClung and the Smiths were readily dismissed as suspect, naïve, or even closet socialists or social democrats. In the course of the 20th century, however, right-wing Liberals relied for electoral success on reformers’ recruitment of voters for ‘Canada’s Natural Governing Party.’

The ability of such ‘conditional’ liberals to secure progressive legislation depended both on sympathizers within the party and on a wider community of feminists, social democrats, socialists, and, by the end of the 20th century, Indigenous activists. Threats on that ‘further left’ forced conservative Liberals to acquiesce in reforms ranging from woman suffrage to mothers’ allowances, minimum wage, old age pensions, the enfranchisement of the First Nations, and medicare. The result proved an often election-winning formula.

When they rejected internal reformers, Liberal parties readily succumbed to reactionary agendas. In the process, their lefties became little more than democratic fig leafs for prime ministers from Wilfrid Laurier to Justin Trudeau and provincial premiers such as BCer John Oliver, in whose cabinet Mary Ellen Smith would briefly serve as Canada’s and the British Empire’s first female minister. Oliver’s reluctant, but much applauded, appointment of her as a minister without portfolio was the 1921 equivalent to gender parity in the 2015 federal cabinet.

Canada’s left liberals have been both idealistic and pragmatic: a more just society is best guaranteed by working with governing ideas and structures not wasting time with fragmented and dogmatic alternatives on the further left. Feminist liberal women and men did much to create the welfare state. Their achievements could not, however, have occurred without assistance from a broader progressive community of social democrats, socialists, and feminists.

Even then, left Liberals were often stymied. Ralph Smith did not win female enfranchisement nor a union label bill before WWI. Nor could Mary Ellen Smith or Nellie L. McClung secure equal pay for work of equal value in either BC or Alberta in the 1920s. Those failures reflected the political weakness of both left liberals and external radicals.

Like Jane Philpott and Jody Wilson-Raybould, suffragist liberals had good reason for disenchantment. In 1928, after she was elected the first president of the National Federation of Liberal Women, Mary Ellen Smith admitted “a general feeling throughout the country that women were being chloroformed.”[16] In the decades after women’s partial enfranchisement, suffragist hopes for greater social justice were crippled.[17]

Nearly a century later, Canadian liberalism still hesitates between warring wings. The appearance of the CCF in the 1930s offered better prospects to some suffragists.[18] Torn between quiescence in hope of long term gains or revolt in hope of allies within and without the Liberal Party, today’s left feminists face hard choices. Their dilemma is all the sharper in a world of rising reactionary politics. No one wishes to give comfort to the enemy.

Veronica Strong-Boag is a Canadian historian specializing in the modern history of women and children in Canada. In a past life she was Professor in the Institute for Gender, Race, and Social Justice and the Department of Educational Studies at UBC.

[1] The title of this piece is inspired by “Jane Philpott: ‘There’s much more to the story that needs to be told,” Maclean’s Magazine, March 21, 2019.

[2] See Stephen Clarkson, The Big Red Machine: How the Liberal Party Dominates Canadian Politics (Vancouver: UBC Press, 2005), Introduction which describes the “Janus-like stance of a centrist party”. This brief discussion will not address the question endemic in many treatments of Canada’s Liberals and its various social democratic and socialist parties, including the CCF and the NDP, as to whether any ‘true’ left exists within their confines.

[5] These politics have been frequently described. See for example, Scott Kerwin, “The Janet Smith Bill of 1924 and the Language of Race and Nation in British Columbia,” BC Studies No. 121 (Spring 1999): 83-114 and Patricia Roy, A White Man’s Province: British Columbia Politicians and Chinese and Japanese Immigrants, 1858-1914 (Vancouver: UBC Press, 1989) and The Oriental Question: Consolidating a White Man’s Province, 1914-41 (Vancouver: UBC Press, 2003).

[6] Tjitske Akkerman, “Liberalism and feminism in late nineteenth-century Britain,” in Tjitske Akkerman and Siep Stuurman, eds., Perspectives on Feminist Political Though in European History from the Middle Ages to the Present (London & NY: Routledge, 1998/2005), 168.

[12] See the repeated reference in Nellie L. McClung, In Times Like These (Toronto: McLeod and Allen, 1915), http://digital.library.upenn.edu/women/mcclung/times/times.html

[17] On its partiality see Joan Sangster, One Hundred Years of Struggle: The History of Women and the Vote (Vancouver: UBC Press, 2018).

One thought on “‘The Best Version of the Liberal Party’: One Feminist Lineage”