This is the third of several posts marking the 75th anniversary of D-Day and the end of the Second World War as part of a partnership between Active History and the Juno Beach Centre. If you would like to contribute, contact series coordinator Alex Fitzgerald-Black at alex@junobeach.org.

New Brunswick’s history is often our family history, and it has been my experience that we often learn far more by word of mouth about what it was really like to have been in the service by those who were there before us.  If you have been given the gift of hearing these kinds of stories first hand, write them down and share them, for if you don’t, the memories can be lost for good. The invasion of Northwest Europe 75 years ago today, changed the world.  Those who took part in it deserve to be remembered.

As a farmboy in Carleton County, I can remember listening to a veteran of the Second World War talking to my grandfather, a First World War veteran, about his experiences in Normandy.  The man had served with the North Shore (New Brunswick) Regiment, and he was talking about the Hitler Youth boys he had fought and the hard fact that they would not surrender with the adults and had to be mown down with machine gun fire.  My grandfather said he was still suffering from a form of shell shock. These days we call it post-traumatic stress. It has always been around us, even in peacetime.

When my father, RCAF Warrant Officer Aage C. Skaarup was posted to CFB Chatham, New Brunswick, where he serviced the equipment that was used to start up the McDonnell CF-101B Voodoos, my mother Beatrice introduced me to another veteran soldier who had been in Normandy.  He was a former chaplain who had also served with the North Shore Regiment. In 1973 he was living in a Chatham hospital. The first thing I noticed as I entered his small room was a Military Cross hanging on his mirror, a fairly rare medal of bravery. I am not Catholic, so calling him father did not seem right.  I asked if I could address him as Padre or Major (Raymond Myles) Hickey and he was very pleased with that.

I had read a great deal about the war and had many questions for him.  He spoke at great length about his experiences and the pride he had in having served with the men of the North Shore Regiment.  He loaned me a book he had written called The Scarlet Dawn, which gave me much more information to add to my list of questions.  His stories covered his wartime experiences from the time he did his basic training in Woodstock to his trip to England by ship and what happened when he landed in Normandy on D-Day with the first wave going into the German storm of fire.  He pulled wounded men from the water as bullets splashed around him, he gave last rites to those who would not survive, and he tended to all around him in spite of the danger. The Military Cross hanging on his mirror was well deserved, but for him, the appreciation of the men he served with was far more important. 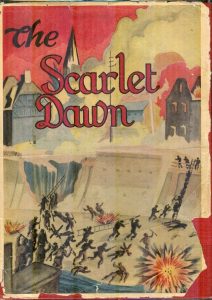 Major Hickey stayed with his men through the horrific battles in France, Belgium, the Netherlands and on into Germany where the war ended for the Regiment.  He came back to the village of Jacquet River, New Brunswick where he had been born in 1905, and where he had been ordained as a Catholic priest in 1933. He served as a curate in Bathurst for four years until he was appointed to the teaching staff at St. Thomas University in Chatham. When the Second World War began and Canada followed Britain in declaring war on Germany in September 1939, Father Hickey enlisted in the Canadian Army to serve as the Chaplain for the North Shore Regiment, a task he managed for six hard years.  The military citation for his award includes this tribute, “His understanding and leadership of men, his keen sense of humour, and his spirit of self-sacrifice, which won him the Military Cross for bravery under enemy fire on D-Day, made him beloved and respected by all who knew him.”

After the war, Reverend Hickey served as the Pastor at St. Thomas Aquinas church in Campbelton, New Brunswick.  His book The Scarlet Dawn was published in 1949.  He became a Monsignor and was awarded an Honorary Doctorate of Laws by his alma mater, but what he valued far more in his recollections to me was his time served with the men of the North Shore Regiment.  Padre Hickey died in Chatham, now the Miramichi, in 1987. 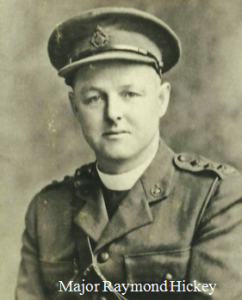 For those of you who would like to read a much more detailed account of Major Hickey’s service, please have a look at Melynda Jarratt’s webpage at www.CanadianWarBrides.com.

Major Harold Skaarup is a retired Canadian Army intelligence officer, having served in Cyprus, Bosnia-Herzegovina, Germany, and Afghanistan. From 2015 to 2017 he was the Honourary Lieutenant-Colonel for 3 Intelligence Company, Halifax.