This is the second post in a summer series exploring societal, community, and familial connections to food and food history. See the series introduction post here. An earlier version of this post appeared on The Canadian Cooking Chronicles, as part of a final project for an Archives Practicum class.

When examining the history of Canadian food, the vast variety of choice in geographic region, era, dish, and cookbook – among other factors – can be overwhelming. When starting my investigation, I knew that I wanted to recreate archival recipes and use them as primary sources to see what could be learned about the history surrounding them. However, as a relative new-comer to this type of history, choosing where to start was a daunting task.

When I had the opportunity to look through a small selection of cookbooks held by they archives at Algoma University, I came across a cookbook titled Traditional Indian Recipes From Fort George, Quebec. As I read through the various recipes that had been contributed by Indigenous women in the late 1960s, there was one recipe that stood out as a food known for its interconnectedness to early Canadian history; a dish that has been regarded as one of Canada’s earliest known staple foods: pemmican. As soon as I saw the recipe, I knew that this was where I wanted to start.

Pemmican is a food made of protein, fat, and berries that originated with Indigenous tribes in North America. The nutritional density and long shelf life of this food made it ideal for hunters that wanted to travel light.

The name of the food comes from the Cree, Pimikan, which means fat/grease. Although it is difficult to pinpoint the origins of pemmican, it is known that it has been a traditional food of many Indigenous communities in North America long before colonization. It was a useful source of nutrition after the hunting season ended because, if preserved properly, it would not spoil for months or even years after it was made. Post-colonization, Pemmican was introduced to fur traders and quickly became sold as a form of sustenance during travel, especially to the traders in the prairies. In Canadian writing, Pemmican was referenced as early as 1743, although it’s origins significantly predate this documentation.

The following recipe for Pemmican is from the cookbook, Traditional Indian Recipes From Fort George, Quebec, found in the Fort George Collection of the Shingwauk Residential School Centre archives at Algoma University. This book was published in 1967, with traditional recipes compiled from First Nation communities in the Fort George region. 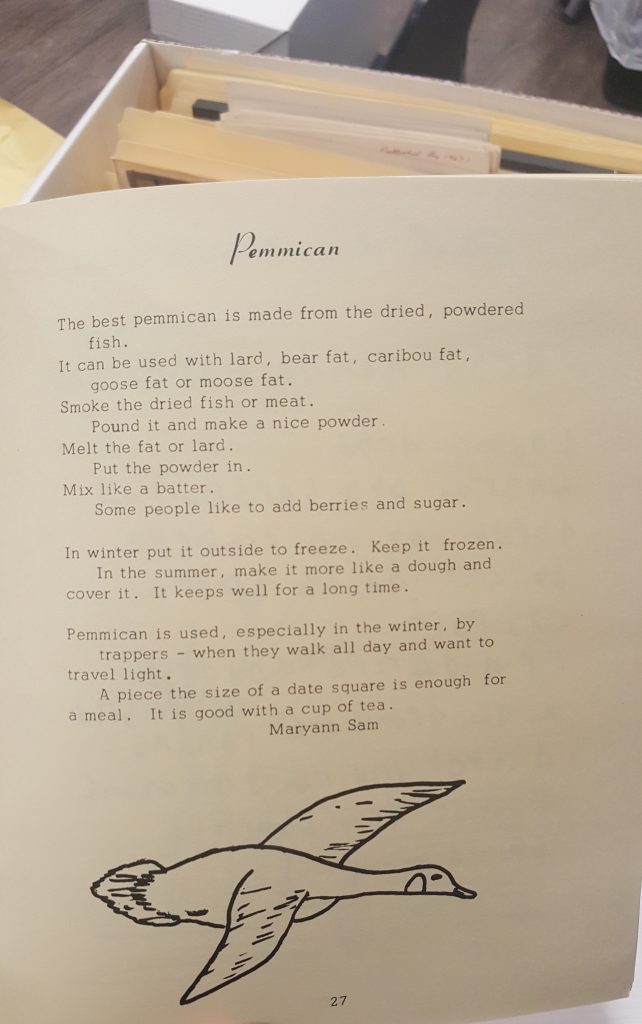 The best pemmican is made from the dried, powdered fish. It can be used with lard, bear fat, caribou fat, goose fat or moose fat. Smoke the dried fish or meat. Pound it and make a nice powder. Melt the fat or lard. Put the powder in. Mix like a batter.

Some people like to add berries and sugar. In winter put it outside to freeze. Keep it frozen. In the summer, make it more like a dough and cover it. It keeps well for a long time.

Pemmican is used, especially in the winter, by trappers – when they walk all day and want to travel light. A piece the size of a date square is enough for a meal. It is good with a cup of tea.

Because I had never eaten pemmican, let alone attempted to make it, I thought that some preliminary research was necessary in order to even hope for a successful outcome. I took to the internet to examine the history behind the food as well as looking at several recipes for pemmican to see the common measurements of each ingredient, as the recipe was not descriptive in this area. I found that dried beef or veal could be used as long as it was lean, so I decided to choose this option as it seemed the easiest to recreate without a smoker and the most accessible in modern grocery stores.

I went to the store and bought lean ground veal and a dried fruit that was traditionally used in pemmican for important occasions: currants. Since this was my first time making the dish, I thought that it was a special occasion in it’s own right!

From my reference recipes, I found that the meat had to be thoroughly dried in order to grind it down. Because I wasn’t sure what to expect from this experiment, I decided it was best to make a small batch in case it didn’t turn out right the first time. For this reason, I started with 1/3 lb of veal, which I spread out on a cookie sheet and put in a low temperature oven. 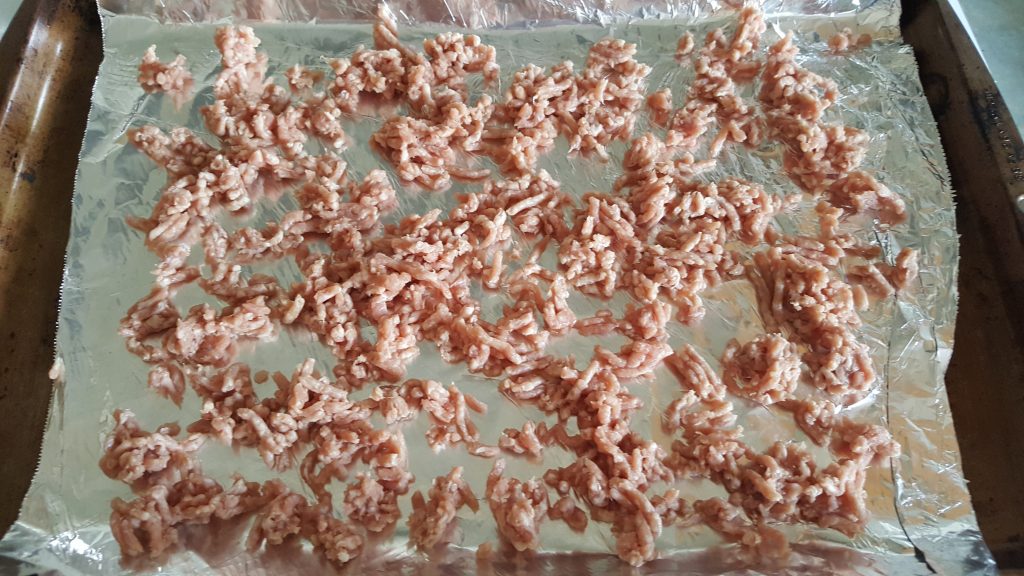 Going in the oven!

I wasn’t sure how long it would take to dry out, so I checked it every hour and finally took it out after 3 1/2 hours when it was well dried. 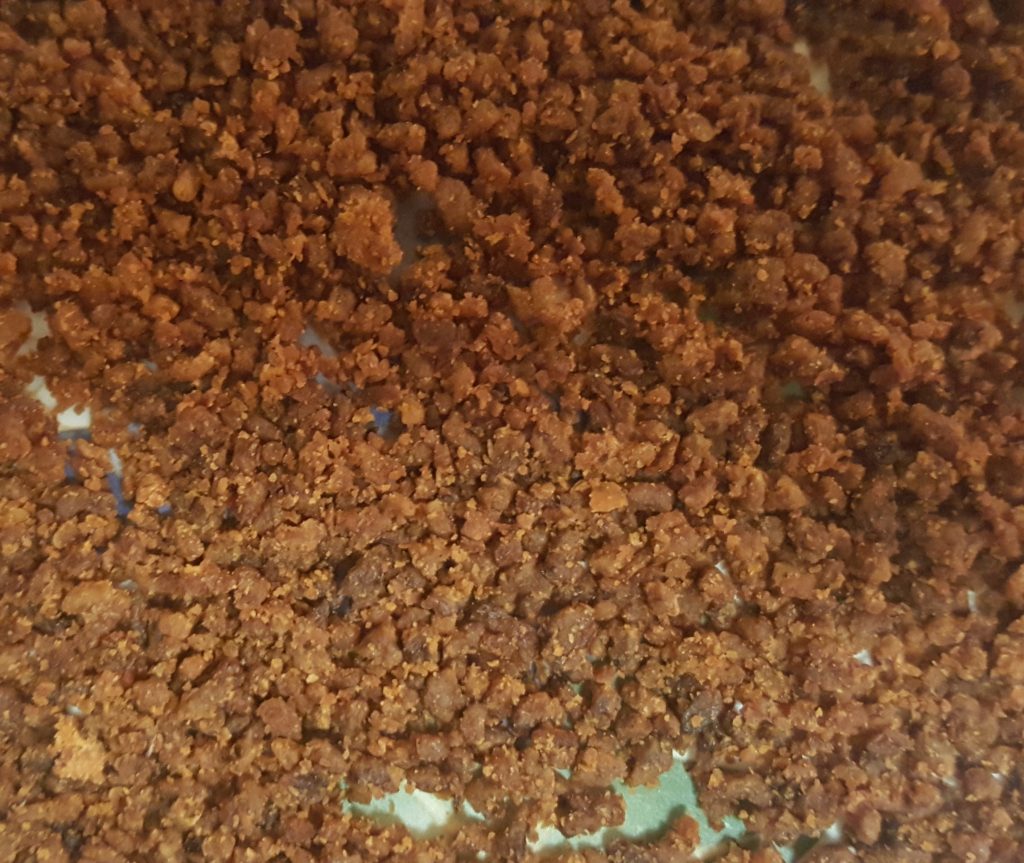 I thoroughly patted the meat down with a paper towel to remove any moisture and attempt to make it as dry as possible. At this point, I knew that I had to grind it down into the “powder” that the original recipe talks about. However, the kitchen of a student is limited. I didn’t have the fancy food processors that all my reference recipes talked about. I knew I’d have to work around this. After all, the original makers of this recipe didn’t have a food processor and that didn’t seem to stop them. This recipe predates the food processor!

I finally decided that the best way to achieve the desired texture was to put the meat in a plastic bag, cover it with a tea towel, and break it down with the rolling pin. With a lot of hard work and a little elbow grease, I got the meat to the texture of coarse sand, which was a win in my books. 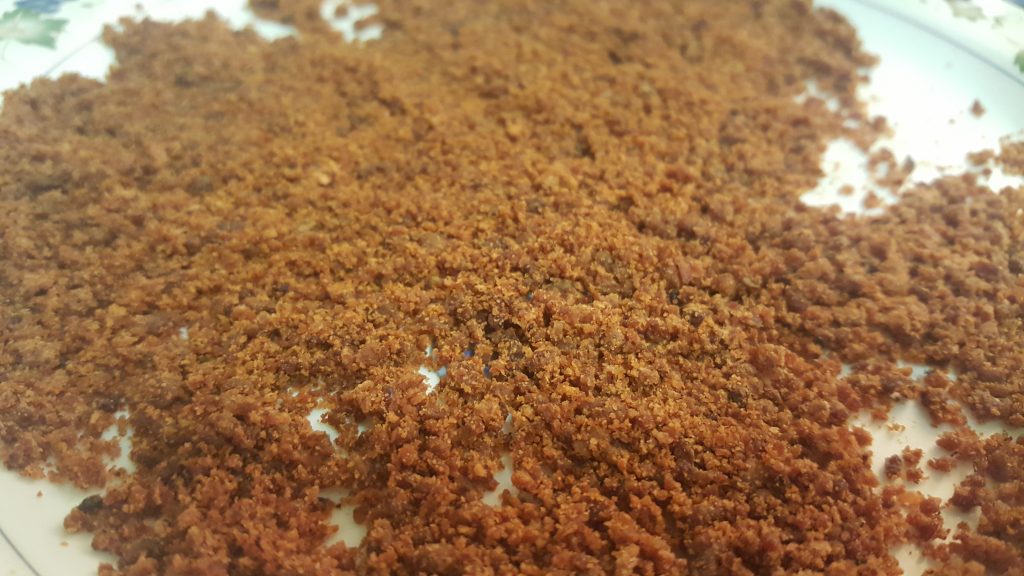 I added the currants, poured in enough fat to cover the mixture, stirred, and put in the freezer. It looked and smelled a bit like cat food going into the freezer, which, I’m not going to lie, concerned me. However, it did seem to somewhat resemble online pictures, which gave me a little hope.

After freezing, it was solidified and ready to take on the trail (if I was the outdoorsy type). It still looked a little like cat food, but it’s not too shabby for my first crack at Pemmican! 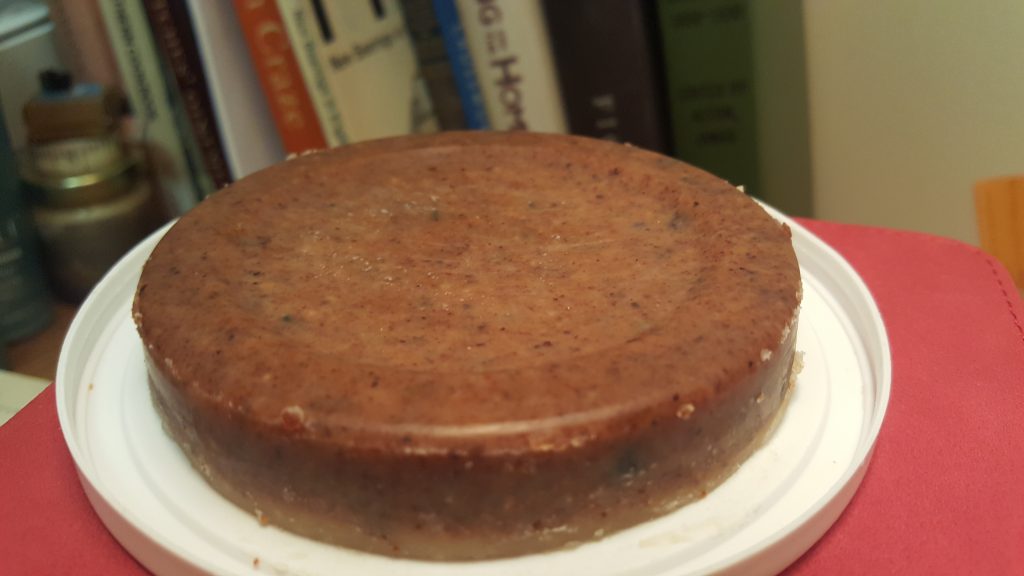 From what I’ve learned in my research, making Pemmican is not a science. Measurements do not have to be exact, and there are many variations on the dish. The following is the recipe that I constructed based on the archival source and the online resource material with which I filled in the gaps:

Crumble the veal into small pieces on a cookie sheet lined with tin foil. Place the veal in the oven set to 150F for 3 1/2 hours or until dry and crumbly (you may need to drain or pat the meat to remove juices during this process). Place the veal on a paper towel and pat away any excess fat until completely dry. Use a food processor or mortar and pestle to grind the meat until it is a sandy powder texture. Mix in currants (whole or ground). Add enough bacon fat to cover the mixture, then mix all ingredients together. Freeze.

This recipe makes one small disk of pemmican (mine was 4 inches).

I’ve been curious about this food ever since my Canadian History professor, Dr. Robert Rutherdale, explained its significance in his lecture on the Red River Colony. The fur trader’s exploitation of this traditional food by increasing its production, not simply for subsistence needs as it had been produced pre-contact, but for profit, led to Pemmican becoming extremely important to the regional economy.

The archived recipe from Traditional Indian Recipes From Fort George, Quebec is a good representation of dishes that made use of the goods obtained through hunting and foraging, which was a large part of the culture for many Indigenous groups in Canada before colonization.

Although the origin of the food in general is a pure representation of one aspect of Indigenous culture pre-colonization, it is interesting to note a few elements of the recipe that show colonial influence. For example, the Fort George cookbook’s recipe for Pemmican mentions lard, an extremely popular European staple, along with a reference to adding sugar, which would only have been available to purchase in stores set up by the fur trading companies.

After making the pemmican, I brought some in to my archival practicum class for my classmates and professor to try. A few willing participants tried it, with a less than enthusiastic response. Although no one was going back for seconds, they could all appreciate the historical significance of the dish and the effort it took to make.

After making and sampling this food, then observing the reactions of others, the primary feedback I received was that both the taste and texture had undesirable qualities. Maybe it’s our modern palate that dismiss the early travel meal, or maybe it’s our modern mindset. In a day and age where food has a strong focus on the visual and aromatic experience as well as making it customizable to an individual’s taste, it may be foreign to think of eating simply for sustenance. Pemmican – in its original purpose – was not luxurious but necessary as a way to nourish the body during a journey with limited space and time for food.

Sophie Hicks is an undergraduate history student at Algoma University. Her academic and research interests include food, gender, and political history, as well as examining the intersection of these areas.

2 thoughts on “Eating History: An Experiential Examination of Pemmican”