Hochelaga: Not a Real Thesis Defence

A Ph.D. thesis defence is at the centre of the narrative in Hochelaga, terre des âmes (Hochelaga, Land of Souls), a Canadian historical drama film released in 2017. The film’s portrayal of the process hardly meets my expectations for how a defence normally unfolds. The story of Hochelaga is told through a series of four vignettes structured around an Archaeology thesis defence at the Université de Montréal. The doctoral candidate in question is Baptiste Asigny, a Mohawk from Kahnawake. Asigny is a Ph.D. candidate in Archeology (rather than in History). His findings tell the story of the Island of Montreal and events that took place at the site of the ancient St. Lawrence Iroquoian village of Hochelaga.

Assigny, presenting his dissertation at his thesis defence.

As we find out, for the last decade or so, Asigny has excavated the field of the Percival Molson Memorial Stadium at McGill University after a rainstorm opened a massive sinkhole during a football game, killing one McGill player. When the sinkhole appears, Asigny’s supervisor, Dr. Antoine Morin obtains an order from Québec’s Ministry of Culture to be allowed to dig, and he hires Asigny to lead an archaeological excavation of the field. Asigny’s findings are truly remarkable – well, they would be if this were a true story and not a movie.

Asigny need not worry much about his defence, for he is presenting a doctoral project that could only be found in a movie – the irrefutable discovery of the site of the ancient St. Lawrence Iroquoian village of Hochelaga, the exact place Jacques Cartier visited on the Island of Montreal in 1535. In addition to discovering Cartier’s famed (?) crucifix, which he supposedly presented to the St. Lawrence Iroquoian Chief Tennawake, Asigny has unearthed several other artefacts of massive historical significance, including a cast-iron stove door that could have belonged to a French settler in the mid-seventeenth century and a cache of arms that could have belonged to Patriote rebels during the Lower Canada Rebellion of 1837.

The sinkhole at Molson Stadium, an archeologist’s dream?

Asigny unceremoniously dumps these other objects into a chapter titled “Incidental Discoveries,” yet he still discusses them at length in the short time allotted to him for the oral presentation. Any one of these “incidentally discovered” artefacts could have supported an entire thesis of its own. Moreover, Asigny’s inclusion of all the objects discovered in the sinkhole in his dissertation is puzzling since he would have to engage with a vast scholarly literature to properly analyse each segment of the more-than-400-year history he analyzes in his doctoral project.

Just as the audience begins to wonder about the actual central point of Asigny’s thesis, he announces: “Now, to the main argument of my thesis.” Asigny argues that he has conclusively established the location of Hochelaga.  He bases this claim on two pieces of key evidence found in the sinkhole – 1) Traces of a triple palisade Indigenous village like the one Jacques Cartier described in his 1535-1536 journal 2) A gold-plated crucifix whose provenance Asigny is able to link to a foundry in France that purportedly supplied Cartier’s second expedition. 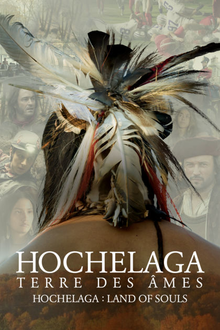 The Examining Committee and other audience members seem generally pleased with Asigny’s oral presentation, and perplexingly that seems to be enough for the thesis defence! The film skips ahead to an outdoor scene on the steps of the building with Asigny and his supervisor Dr. Morin handing him a bottle of wine, congratulating him on a successful “defence,” and addressing him as “doctor.” However, the Examining Committee never actually did any “examining” in the movie! In a typical thesis defence, after the short oral presentation the committee is expected to ask relevant, clarifying, and analytical questions on the project. The doctoral candidate should expect at least a little pushback before being welcomed into the academic fold!

Assigny’s supervisor, congratulating him on his successful defence

Personally, I have navigated the treacherous waters of a thesis defence once myself (soon to be twice), and I have witnessed many other thesis defences during my years as a graduate student in two different history departments. The Ph.D. defence comes after the long and laborious work of researching and writing the dissertation and can be the source of much anxiety and trepidation for the doctoral candidate.

Based on my observations, a thesis defence is composed of three main parts:

1) A short oral presentation (10-15 minutes in length) where the candidate is invited to highlight the major issues covered in the thesis, the conclusions which have been reached, and the significance of the findings. Basically, just a recap or refresher, as the Examining Committee has already thoroughly read the dissertation.

2) A period where the Examining Committee asks relevant and probing questions on the methodology and contents of the thesis, and/or on the research field. This part is truly 80%-90% of the entire defence process.

3) At the conclusion of the examination period, the candidate is asked to step into the hallway alongside other non-committee members to wait while the committee deliberates alone inside the room. After a (hopefully) short wait, the candidate is invited to come back into the room where the members of the committee will greet and shake hands with a newly minted Doctor of Philosophy.

Frustratingly, the movie skips over the most substantive parts of a thesis “defence”! Asigny really did not have to defend anything or answer any questions. Such a significant contribution to historic, archeological, anthropological, and Indigenous cultural communities does not warrant a proper round of academic scrutiny? Surely the sinkhole below Molson Stadium will lead to hundreds (if not thousands) more dissertation projects, publications (articles and books), museum exhibits, and general discoveries of interest to Canada at large. It would have been nice to see the members of Asigny’s committee’s reaction to, interest in or questions about such a significant project. While your committee is NOT out to “get you” during your thesis defence, it is normal for them to challenge you and hold you to a rigorous academic standard.

Another issue with this movie is how it portrays a successful historical/archeological project as being the “discovery” of new objects or new materials that either alter, reinforce, or somehow add to the historical narrative. However, in many instances, scholarly engagement stems largely from reinterpretation of a pre-existing or already known repertoire of primary sources – whether they be official government reports, journals, correspondence, account books, dispatches, censuses, surveys, maps, parish registers, notarial records, oral traditions, and indeed artefacts. The job of the historian/archaeologist is not so much to “discover” new primary sources but rather to re-interpret and re-analyse historical events, periods, peoples, and structures through the usage of the known primary sources.

With so little to say about the actual process of the thesis defence in the movie, I will take a moment to praise the film’s most interesting vignette: Jacques Cartier’s encounter with the St. Lawrence Iroquoians at Hochelaga on October 2, 1535. The film accurately depicts these events, combining Cartier’s journal (read against the grain) with St. Lawrence Iroquoian ethnohistory. This is the best part of the movie and a refreshing update from the previous well-known depiction of Cartier’s St. Lawrence Iroquoian encounter from the “Heritage Minute” that has been played on Canadian TV since 1991. The film portrays Cartier’s arrival at Hochelaga, replete with a realistic palisade village, Iroquoian-longhouses, religiously zealous Frenchmen, and an encounter rife with cultural misunderstandings (for example, an Iroquois translator mistakes an image of Jesus Christ on an embossed ceramic for an “injured warrior”). After Cartier departs, the oddly prophetic St. Lawrence Iroquoian Chief Tennawake predicts the violent upheaval of the Iroquois Wars as well as the Great Peace of Montreal of 1701, two events that dominate Canadian historiography and are still perennial preoccupations of local Montreal and Québécois history.

Depiction of Hochelaga village in the film. 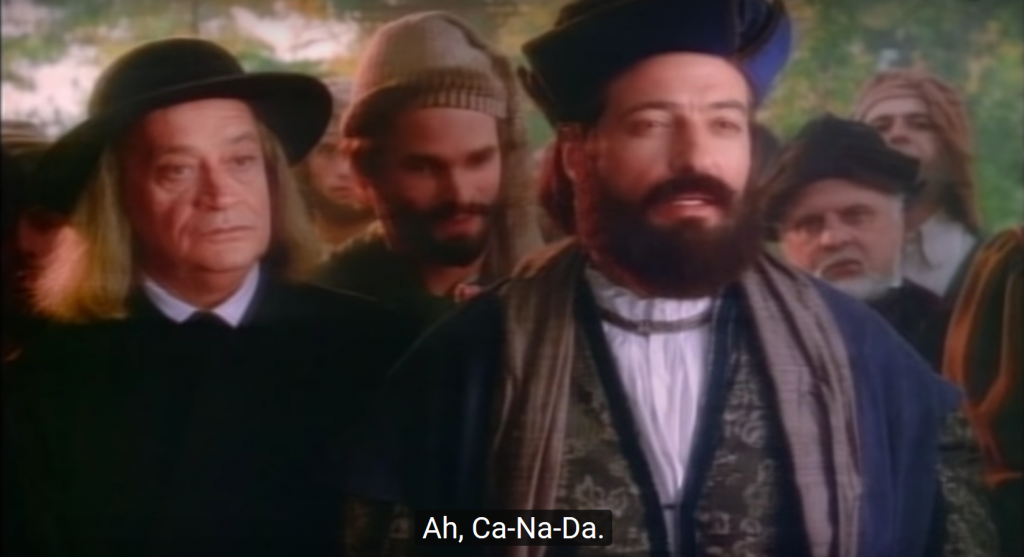 The “Heritage Minute” depiction of Cartier at Hochelaga

Overall, Hochelaga’s portrayal of a thesis defence has less to do with an accurate rendition of the final stage of the doctoral dissertation project and more to do with a convenient narrative-framing device meant to tell a multigenerational story of the Island of Montreal. In this regard, Hochelaga represents the shifting political and cultural landscapes of Montreal, a space known intermittently as l’Île des morts, Hochelaga, or Ville-Marie, a memory-charged landscape of historical and contemporary significance to Indigenous, French, and British peoples. Hochelaga is a good reminder of this, although perhaps it is not a good thesis defence-prepper for doctoral candidates.

Scott Berthelette will defend his Ph.D. dissertation at the University of Saskatchewan in November 2019. Scott has recently joined the Department of History at Queen’s University as a tenure-track faculty member in Indigenous history.