This is the ninth post in a series marking the 75th anniversary of D-Day and the end of the Second World War as part of a partnership between Active History and the Juno Beach Centre. If you would like to contribute, contact series coordinator Alex Fitzgerald-Black at alex@junobeach.org.

An officer on my staff, a former student at Gdansk Polytechnic, translated every sentence into German. When the words ‘Polish Division’ were uttered by the translator, and as if by inattentiveness repeated, it seemed the Germans whitened and unease flashed in their eyes. I enquired if they understood — ‘Jawohl’ — they replied. I gave a sign that they might leave. But, a thought passed through my mind,

My grandpapa’s story of the Second World War remains only in sparse pieces of kit, the memories of his children and friends, and a photo album. An avid photographer, he took a quarter album’s worth of photographs documenting his wartime experiences. A treasure to my family, it is also an interesting historic document. My grandfather’s album manages to match up with a unique story. One that saw a long and hopeful saga for the redemption of himself and his Polish countrymen. 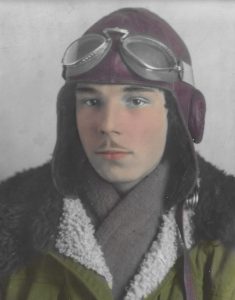 Franciszek “Frank” Pindor, born outside of Krakow in Cieszyn, Poland lied about his age to join the Polish Air Force in 1938. Frank was born into poverty at a time when a military career in Poland meant a respectable future. However, his mother forbade his lofty ambition of becoming a pilot due to the dangers of flying. Instead, Frank trained as a meteorologist before the Germans invaded the following September. Ordered to cross into the then neutral country with 10,000 other airmen, he became a refugee in Romania. Arriving by way of Morocco, Frank once again became a member of the Polish Air Force under French command, operating out of Bron near Lyon, France. They did not stay for long. 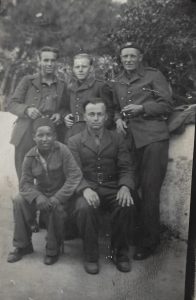 Frank (rear left) with his comrades in Morocco, 1940 (Author’s Photo)

Following the Battle of France, Frank fled to Great Britain to continue his fight from British soil. The Polish army-in-exile wasted no time to prepare. Posted to Scotland, available soldiers were to build up a new I Polish Corps and erect anti-invasion defences on the eastern coast at Fife.[2] Polish General Stanis?aw Maczek arrived in September 1940 to rebuild his motorized brigade. Maczek’s plan was to build up a new armoured regiment to participate in the Allied invasion of the continent. Over the next two years, bolstered by international volunteers and a large release of Polish prisoners from the Soviet Union in 1941, Maczek realized his armoured ambitions with the 1st Polish Armoured Division in 1942.[3]  My grandpapa transferred to the division, where he received training as a wireless operator in the 2nd Motorized Artillery (Towed) Regiment. 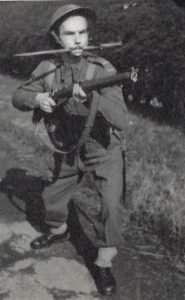 On 1 August 1944, the same day as the Warsaw Uprising in Poland, the 1st Polish Armoured Division arrived on French shores at Mulberry Harbour ‘B’ in Arromanches.[4] The division went into battle as “The Black Devils,” a reference to the black epaulette on their left shoulder but also their pre-war uniform of black leather tank jackets. The division immediately moved into combat attached to Lieutenant-General Harry Crerar’s First Canadian Army.

The 1st Polish Armoured Division saw its baptism of fire in Normandy. Following closely on the left flank of the Canadians, the Poles advanced from 8-22 August. At the climax of the pursuit, the Poles stood on a strategic mound that General Stanislaw Maczek designated Maczuga (The Mace). There, an unrelenting onslaught of crack German troops bloodied, but did not break the Poles. As sappers from the Royal Canadian Engineers began clearing the hillside battlefield, they erected a tribute to the defenders on a temporary signpost that simply stated that the ground was “A Polish Battlefield.”[5] After 1,441 casualties, the men of the 1st Polish Armoured Division helped to close the gap that ended the Normandy campaign and started the long drive back to Germany.

Only two photographs of Frank exist from Normandy. My favourite is a playful group photo where he flashes a coy look while posing with an accordion, likely a few weeks before the Allies closed the Falaise Pocket. When I first saw these photographs as a child, I had no idea of the desperation during the Polish evacuations or the carnage at Maczuga. As his war progressed over album pages, I never saw the toll of combat straining my grandpapa’s face. Frank was always smiling brightly. Yet, I found that his artillery regiment supported the Maczuga fighting by firing over 7,000 shells on one day alone.[6] More than seven decades after his part in Normandy ended, I am humbled by his actions and the sacrifices of his comrades to redeem the defeat of their homeland. 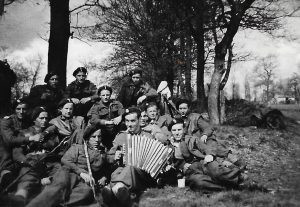 One of the final acts of redemption for the Polish troops was on 6 May 1945. General Maczek stood by Canadian Lieutenant-General Simonds to receive the final German surrender at the port city of Wilhelmshaven, Germany. Stationed in the town during this surrender was my grandpapa. Many of his final wartime and post-war photographs found Wilhelmshaven as a backdrop. 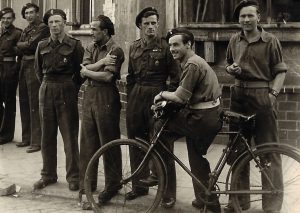 Frank Pindor (on bicycle) with members of his unit, Germany, 1945 (Author’s Photo)

Despite their struggles in the war, victory in Europe did not bring my grandpapa and his fellow soldiers the long-hoped liberation of their homeland. The Soviets annexed the country shortly after the war as the Polish People’s Republic in January of 1947. This occupation left a bitter feeling among the Poles as the western world celebrated the end of war.

Given the choice of moving to Australia or Canada when his military service came to an end in 1947, Frank decided to follow one of his wartime friends, Julian Knot, to Canada. He arrived in Quebec to begin a new life in another part of the world. Frank married my nonna, Jacqueline Brault, in 1952 (she always said she would fall in love with one of those “brave Polish soldiers”). They moved to Niagara Falls, Ontario where he worked at the Sir Adam Beck hydroelectric dam beneath the falls. My grandparents moved to Kirkland Lake, Ontario in 1954 where they raised three children, including my mother. Frank was a neighbourhood barber in Kirkland Lake from 1954 to 1982, cutting the hair of gold miners, fellow Polish neighbours, and future NHL players like Maple Leaf Terrance “Dick” Duff. My grandpapa would not see his homeland and childhood family again until he returned with his own family to Poland in July of 1968.

Frank Pindor, the 20th century hussar smoking a pipe whose portrait hangs on my wall, passed away in 1994 in Montreal.

Frank’s war will always be a mystery to me. What he left remains in the images he captured and the private conversations he had with family and friends. My imagination always tries to construct what his experience must have been like, a sentiment found with any military enthusiast or descendent of a veteran. But the search itself has brought me close enough to him without having met him. His story is as vast, as epic, and as awe-inspiring as the lengthy struggle for Polish freedom. Denied his country after the war, I’d like to think that he found a fitting home with the Canadians he fought alongside in Normandy and Northwest Europe. As for me, his album, story, and memory will have a home with me wherever I go.

Sean Campbell studies Public History at Western University and will be graduating in Fall 2019. He is currently finishing practicum work as a collections specialist with Parks Canada in the Yukon. His primary research interest is Canadian, American, and European military history. 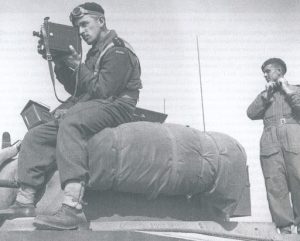 Primary source materials are readily available online through the Polish Institute and Sikorski Museum based out of London, UK (http://www.pism.co.uk/documents.htm). The PISM also hosts an insightful YouTube page with an assortment of digitized films shot during wartime, documenting the Polish experience under British command  in the Second World War (https://www.youtube.com/c/PismUk).

If you would like to visit the site of Maczuga battlefield, the Memorial de Montormel is a very comprehensive interpretive center is available to visit and gain more in depth knowledge about the events of the battle (http://www.memorial-montormel.org/).

One thought on “Hussar: My Grandpapa and the Polish Experience Under British Command in the Second World War”