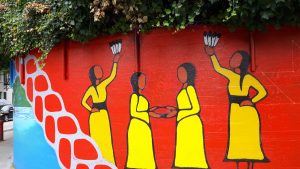 The Downtown Eastside (DTES) of Vancouver has been described as Canada’s Poorest Postal Code and one of the country’s densest populations of substance-using and low-income communities. Largely due to the disappearances and murders of so many of its women and girls, the DTES has also become known as ground zero for disproportionate violence against Indigenous women, as well as against sex workers. These issues came into sharper focus during Vancouver’s escalation of drug overdose and HIV deaths of the 1990s, an epidemic that, under intense public and media scrutiny, was brought to the attention of international observers.

Despite the bleak reality of this multi-faceted crisis, academic research in this area has yet to acknowledge the value of community resiliency and ingenuity, and the role of community organizations in raising the profile of violence against sex workers in the DTES. Researchers have had many reliable reports at their disposal, but these have been effectively ignored.

An integral part of this community network was the Neighbourhood Safety Committee (NSC) that included groups like the Downtown Eastside Youth Activities Services (DEYAS), which had run a needle exchange since the 1980s, and the Vancouver Native Health Society which was focused on Indigenous health in the DTES. The NSC released two critical reports focusing attention on the disappearances of sex workers from the DTES, as well as increasing crime rates in the community.

With funding from the DEYAS, the NSC published its first report in March 1995. The report’s author, Sue Currie, documented the safety needs of sex workers in the DTES and pointed to major violence against sex workers by Johns, as well as increased indifference to these women on the part of the police. The report called for police tolerance of sex workers and drug users in order to better investigate assaults and disappearances; it also appealed for specialized training sessions to help police better serve these marginalized residents within the DTES.

The NSC’s second report, written by Alyssa Davis in 1996, described the rise in drug-related thefts and pawnshop fence operations in the DTES. The report highlighted a gendered division between male drug-related thefts and female involvement in the sex industry, calling for police to intervene to protect both groups from predators and fence operations entering the neighbourhood.

Tensions over community influence on the police and the provincial government asserting jurisdiction over its emerging public health crisis came to a head around the formation of the Provincial Prostitution Unit (PPU). As the community placed increasing focus on getting sex workers off the streets, the NSO—which had begun to gain traction with a segment of the Vancouver Police Department—hoped that the PPU would be a chance to demand investigation into the disappearances of women from the DTES.

After inviting members of the Neighbourhood Safety Office to take part in a policing conference in New Westminster, B.C., in what seemed like an opportunity for collaboration, Attorney General Ujjal Dosanjh then delivered a proposal for the Provincial Plan on Prostitution and Sexual Exploitation of Youth on March 21, 1996. Instead of being a place where community representatives could voice their concerns, the PPU was part of the $760,000 Vancouver Action Plan for Sexually Exploited Children, an initiative staffed by only three officers. There was no focus on missing women. The PPU gradually folded into a provincial agenda around transnational sex work interdiction and child sexual exploitation—a far cry from the urgent priorities of the NSO and the DTES community at large.

That same year, the province offered a decisive response to the DTES’ concerns. As Ujjal Dosanjh stated, “We’re going after the pimps and johns who are sexually exploiting children and youth in prostitution [… ] We’re going to take action against the violence, danger and intimidation that prostitution is bringing to our neighbourhoods. And we’re going to take preventive measures to keep our children and youth off the street.”[2] As journalist Suzanne Fournier remarked, “Frustrated by an ‘unworkable federal law’, Vancouver vice cops have convicted only two men in six years for buying sex from kids. But they’ve charged 354 juveniles with selling sex.”[3] Attention was trained on the safety of youth as opposed to adults, pointedly leaving missing and murdered women on the margins, somewhere they had always been.

Similarly, John Turvey, head of the DEYAS, concluded, “Kids are arrested, and their clients run free.”[4] And as journalist and childhood sexual exploitation researcher Kimberly Daum reported, “Sexually exploited street children are not only discriminated against in the application of the law, they actually are incriminated and formally sexualized and stigmatized by the law.”[5] Rather than engage the community in earnest and focus on investigating the disappearances of women, many of them Indigenous, the sex trade as it pertained to youth and international crime networks, became the sole focus of the PPU.

To make matters worse, the resulting shift in provincial priorities and a sudden lack of funding triggered the closure of the Neighbourhood Safety Office less than a month after the creation of the PPU. This amounted to a purge of social supports for services unable or unwilling to align with the province’s new direction. As journalist Gordon Clark reported, “[t]he coordinator of the Downtown Eastside Neighbourhood Safety Office was dismayed to learn Victoria spent $61,000 on an international crime prevention conference that wrapped up in Vancouver yesterday while refusing to continue funding Vancouver’s neighbourhood crime prevention offices.”[6] As a final act of protest, the Neighbourhood Safety Office staged a fundraising bake sale outside of a DTES hotel to highlight the loss of funding.[7]

Coinciding with the NSO’s demise, the creation of the Vancouver Coastal Health Authority, which merged the city’s smaller health boards, effectively shut out community voices from health policy as well. As Lou Desmarais, director of the Vancouver Native Health Society, stated in a series of op-eds in 1994, “[The] irony is that the secretariat was brought about in part by the efforts of two groups that had their funding cut—the Native Health Society and the Downtown Eastside Youth Activities Society, the needle-exchange organizers.”[8] Community voices were being removed from discussions on health policy just as they were excluded from conversations about community policing and policymaking.

While the NSO had been a product of downloading community policing services onto community organizations in the DTES, it had offered hope that the disappearances of sex workers would be taken seriously by VPD liaison officers. To the frustration of the DTES and with disappearances on the rise, the NSO as a space of dialogue and collaboration around social policy amongst police, city officials, and community organizers had tragically come to an end a mere four years after its creation. Ironically, many of the recommendations put forward by the NSC’s two reports were proposed 16 years later by the final report of B.C. Missing Women Commission of Inquiry—specifically, the need for a 24/7 drop-in service for women, increased community liaison positions with the police and city, and specialized training to help officers relate more effectively to Indigenous and marginalized communities. The closure of the NSO and the creation of the PPU and the Vancouver Coastal Health Authority meant that community priorities would be dictated by the province and city at large, rather than DTES advocates who most understood and best served the needs of the community’s most vulnerable residents. What should have given the DTES more agency ultimately wound up taking away their collective power.

It is unclear whether the two NSC reports, had they been taken seriously, would have prevented the murders by serial killer Robert Pickton. But their striking absence from scholarship in this area—and in light of  the DTES’ relentless efforts in calling attention to the cycle of violence in their community—remains a crucial point of concern for academic inquiry into violence against Indigenous women.

James FitzGerald is a Ph.D. candidate in Politics at York University where he studies settler colonialism in Canada, specifically issues related to violence against Indigenous women.

[5] Daum, Kimberly. 1996. “A participant in a government-sponsored symposium on youth prostitution thinks the arrest priorities are all wrong.: Prosecute the kids’ customers, minister, not the kids! [FINAL Edition]” The Vancouver Sun 18 Sep: A.15.

[8] Lou Desmarais. 1994. “Wasting away at the bottom of the AIDS totem pole.” The Vancouver Sun 19 April. Vancouver, BC. York University. Factiva.

One thought on “The Missing History of Disappearance in Vancouver: The Rise and Fall of the Neighbourhood Safety Office”