In 1989, psychology professor Philippe Rushton inflamed debates over discrimination at Western University (then known as the University of Western Ontario (UWO)) by outlining his racist theories at the annual meeting of the American Association for the Advancement of Science. For some, Rushton’s academic racism made him unfit to teach at UWO. For others, protecting academic freedom was ultimately more important than the content of Rushton’s work.

Perhaps the lines of debate will sound familiar. Jordan Peterson, University of Toronto psychology professor, came to prominence in 2016 for attacking gender-neutral pronouns. Like Rushton, Peterson welcomed debate that made academic freedom, not prejudice, the core issue.

In my first of three posts about the now-cancelled Congress 2020 at Western University, I noted that the most ardent opponents of university codes of conduct mixed up academic freedom and free speech in the early 1990s.

This second post takes up a related history: how academic freedom, as a valued principle of university life, became useful cover for professors trying to beat back criticism of their fringe or far-right views. 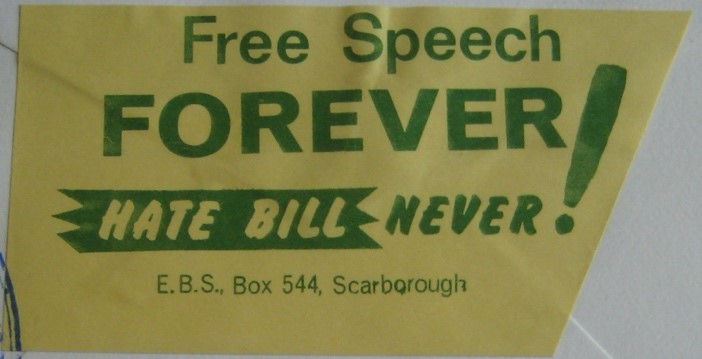 In 1970, the Edmund Burke Society (EBS) announced its opposition to the criminalization of hate speech with bumper stickers: “Free Speech Forever!”

EBS was formed in Toronto in 1967. It sought to invigorate “militant conservative activism” and foster “an alternative to the liberal-leftist-Communist dogma” on campus and in society. Members delighted in direct action. They repeatedly antagonized anti-Vietnam War demonstrators.[i]

One of EBS’s leading figures was Paul Fromm, then a University of Toronto undergraduate. Against growing New Left sentiment, he hoped to develop a New Right, in part by borrowing from his opponents.

During the 1960s, the student movement overturned the paternal role of universities. The Berkeley “Free Speech Movement” of 1964-1965 was a pivotal episode in the struggle for student civil liberties and intellectual autonomy.

Fromm lifted the “free speech” idea and shifted its political application from left to right. Among right-wing civil libertarians, free speech became a byword to indemnify ultra-conservative opinions against censure. When EBS organized its own “teach-in” in 1967, the theme was a defence of white minority rule in Rhodesia.

In 1972, EBS became the Western Guard, which condoned political street violence, stood for “a White Canada,” and led directly into a fascist party formed in 1976.

Fromm quickly resigned from the Guard. He thought extremist rhetoric and violent tactics were a bad idea. Effective “rightist” activism, Fromm argued, would operate ever-so-slightly within the bounds of political respectability.

Fromm ran several front organizations in the 1970s and 1980s. One of them, the Canadian Association for Free Expression (CAFE), defended the speech rights of Holocaust deniers, anti-Semites, and fascists.

Fromm’s favoured issue was opposing non-white immigration to Canada. And intellectualism was essential to his political project. Fromm was especially keen on the emergence of sociobiology in the mid-1970s.

As a legitimate field of academic study, sociobiology was an intervention in debates weighing heredity and environment, nature and nurture. Sociobiologists were neo-Darwinists who speculated on the genetic bases of human social behaviours.

Yet for white supremacists, sociobiology provided the aura of scientific legitimacy needed to renew eugenics research, which had been so thoroughly discredited in the wake of the Holocaust. To Fromm, sociobiology provided “an extraordinary blueprint” legitimating a hierarchical, xenophobic, patriarchal, and capitalist society.[ii]

Around the same time, Philippe Rushton was also getting excited about sociobiology. Too much of what he was learning at London School of Economics didn’t support his established belief that racial, ethnic, and class differences were genetically-based. He could rehabilitate his views using sociobiology, and in some ways turn back to the discipline of psychology’s roots in the mental hygiene movement.

Rushton was helped along by research funding from the Pioneer Fund. Its eugenics-inspired mission was “racial betterment.” In 1937, the Fund’s endowment was provided by Wickliffe Draper, an America textiles magnate who favoured the Ku Klux Klan’s proposal to forcibly ‘repatriate’ Black Americans to Africa. The Pioneer Fund supported an international network of professors who linked race, heredity, and intelligence.

Rushton began teaching at UWO in 1977. In 1989, after he had secured tenure, Rushton advanced his position that “race is more than skin deep.” Claiming to have synthesized data on fifty different physical and behavioural traits, Rushton argued that intelligence, organized by race, was hereditary and inversely related to sexuality. He reduced humanity to a three-way racial ranking system. Rushton contended that “Orientals” were slightly more intelligent than “Whites,” while “Negroids” were far less intelligent and also had bigger male genitalia, higher sex drive, greater criminality, elevated AIDS rates… and so on and so forth. 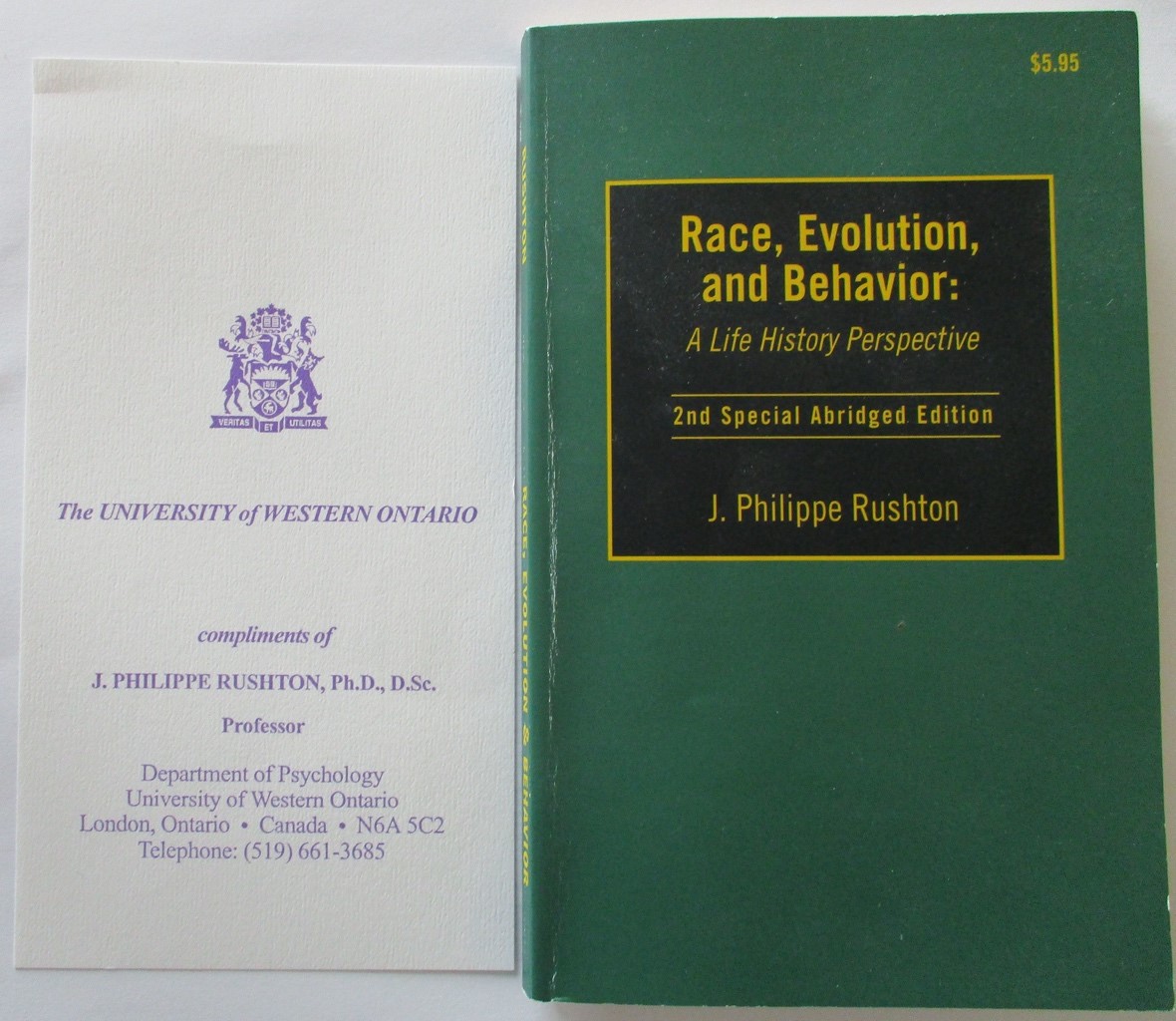 Foregrounding his professorship at UWO, Rushton tried to reach a popular audience by distributing abridged versions of his work on a free of charge basis (with the Pioneer Fund covering the self-publishing costs). (Source: regrettably, booklet in author’s possession)

Next, Rushton proffered an “Out of Africa theory” to claim that “the biological reality of race” had evolutionary causes. A “split in the human line” between Africans and non-Africans, he wrote, had occurred 100,000 years ago. And he positioned discredited ideas about climate as a deciding influence, for example writing that: “Because intelligence increases the chances of survival in harsh winter environments, the groups that left Africa had to evolve greater intelligence and family stability.”

Rushton’s views prompted outrage and protest. UWO campus activists formed the Academic Coalition for Equality and picketed the professor’s classes. (Rushton described the protestors as “a band of blacks and left wingers” who were “parading the halls with bullhorns, shouting, banging on the walls.”)

But the psychologist’s sophomoric racism also brought ridicule. Over lunch, Globe and Mail journalist Jan Wong lampooned Rushton’s “racial-sandwich theory” and produced a measuring tape, suggesting that Rushton measure his own penis right then and there.[iii]

Rushton appeared to invite anything that made his work seem less threatening. He told Rolling Stone: “it’s a trade-off; more brain or more penis. You can’t have everything.”

Rushton’s work nonetheless came under vigorous scientific scrutiny. Fellow academics parsed his selective use of data, his disregard of important scientific debates, his mishandling of key concepts such as heritability, and his crude simplifications. They noted Rushton’s unfounded causal assumptions. (For example, that bigger heads contain bigger brains, and “[b]igger brains have more brain cells and this leads to higher IQs.”)

And most seriously, reviewers showed that Rushton invoked evolutionary theory ideas on natural selection and reproduction that scientists used to explain inter-species differentiation, but which had no validity as a way of explaining human differences.

In sum, despite the scientism and apparent empiricism of his presentation, Rushton’s work made only “scientifically worthless claims,” as University of British Columbia genetics professor David Suzuki put it.[iv]

Shifting the debate onto the terrain of academic freedom suited Rushton, as well as the Society for Academic Freedom and Scholarship (SAFS), which rallied to his cause. By conflating academic freedom and free speech, they offered a judgment-free defence of Rushton’s right to teach and research at UWO.

Rushton also attracted far-right support, and not simply because white supremacists began to cite him as an intellectual authority. Amid the public controversy in 1989, Paul Fromm invited Rushton to speak at a public event held by Canadians for Foreign Aid Reform (CFAR). A coterie of Neo-Nazi skinheads planned to guard the stage.

Rushton cancelled, but not because he had qualms about the far right. He worried what provincial human rights investigators would make of his talk.

Sustained anti-racist protests saw Rushton teach by videotape and then not at all – freed by Pioneer Fund money to write and publish on a full-time basis. If the university tolerated his tenure, Rushton was no longer able to bring racist and specious scholarship into the classroom. He remained a UWO professor until his death in 2012.[v]

Rushton liked to claim that he was harassed by forces seeking to rob him of his academic freedom. Rushton’s theories still became widely known, so much so that the UWO psychologist became synonymous with academic racism in Canada.