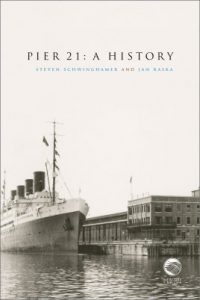 Between 1928 and 1971, around 1 million immigrants arrived in Canada at Halifax’s Pier 21. In the years since its closure as a reception centre for immigration, the site has taken on a symbolic role in representing mid-century Canadian immigration, embodying the policies, procedures, and attitudes of the immigration system. The site is now home to the Canadian Museum of Immigration at Pier 21, which aims to “inspire and enable Canadians to explore their relationships” with immigration and migration.

To achieve this, the museum encourages people to share their personal stories with immigration. This can be a challenge, though, as immigration history can be full of contradiction. For some migrants, Canada provided new opportunities not available elsewhere. For others, however, Canada was exclusionary and refused to protect them when their lives were threatened.

Addressing these complexities is one of the challenges faced by Jan Raska and Steven Schwinghamer in their new book Pier 21: A History. Historians at the Canadian Museum of Immigration at Pier 21, they take first person accounts collected by the museum in crafting a larger narrative history of the facility. The book profiles Pier 21 from its role as an immigration facility to its military operations to its emergence as a site of commemoration.

In this episode of the History Slam, I talk with Jan and Steven about the book. We talk about their interview process, who wanted to participate, and crafting a narrative from personal experiences. We also discuss the contradictions within immigration history, telling challenging stories in museums, and the mythology surrounding immigration to Canada.