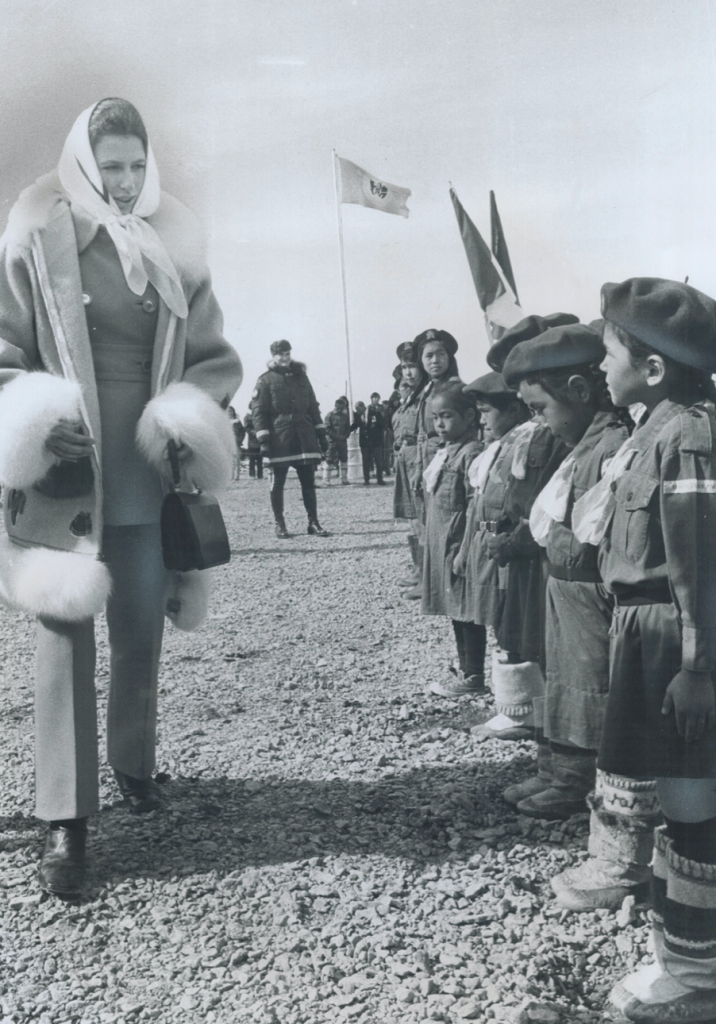 While – as shown in our previous post – Guiding and Scouting were inextricably linked to British imperialism and settler colonialism, some Indigenous students in Canadian Indian residential schools also found that these organizations provided a refuge in an alien environment and a short break from labour and strict routine. It was an opportunity to meet and communicate more informally with other young people, and many had positive experiences of Guide and Scout activities. Dinjii Zuh, Gwichyà Gwich’in historian Crystal Gail Fraser, explains that Indigenous youngsters also resisted and shaped Girl Guide programming at residential schools in the Canadian Arctic. Fraser writes that Guides in the Northwest Territories reformed programming to cope with the school environment, to take control of their education, to train for leadership, and to express local Indigeneity. Guides at Inuvik, Aklavik, Hay River, and other smaller communities in the north “embraced the useful and rejected the useless, while asserting their independence and identities during a time when many children were embroiled in colonial initiatives.”[1] The girls wore braids, pants, beading, and mukluks instead of the standard Guide uniform; created new badges for trapping and fishing, among other Indigenous activities; and developed a unique camping program better suited to northern, Indigenous knowledge, practices and environments. These northern Girl Guides deeply challenged national Girl Guide programming – and Baden-Powell’s original vision – while setting their own standards for generations of young women in the north. Assertive gestures like these are reflective of Indigenous activism today, including many efforts to retain and revitalize Indigenous cultures.

For most, Inuvik is a long way from Poole Harbour, where, in June 2020 – the official risk of vandalism having been downgraded to ‘minimal’ – the statue of the Baden-Powell was soon back on display, accompanied by Union Jack flags and a handmade plaque:

A movement that has 52 million followers and has inspired the world’s population.  It has brought together ALL RACES

of all colour and

This dismissive reference to political correctness, like the assertion that Baden-Powell was simply a man of his time (“who cared 100 years ago!”) resonates closely with British Prime Minister Boris Johnson’s recent statement that removing statues amounted to “a great lie, [and] a distortion of our history.”[3] Johnson’s use of the word “our” – a simple possessive pronoun – does a lot of work. It creates a vision of a unified and implicitly white national community, whose past achievements and present values are being threatened by outsiders who neither belong nor deserve the same respect, consideration and representation as those being commemorated and doing the commemorating. That these imagined outsiders are racialized populations whose land and dispossession have historically propped up imperial enterprise and colonial economy and settlement is not incidental. In this framing, which has much in common with the rhetoric used by Donald Trump, Jason Kenney, and other conservative opponents of critical discussions of racism and white supremacy, the “statue wars” are a high-stakes, zero-sum game and “history” is a static collection of nation-based dates, facts, and dramatic public accomplishments.

This approach, we submit, misses the point completely. Baden-Powell’s two lives, like the careers of Rhodes, Lee, Macdonald, and other “great men” commemorated in stone, transcended national boundaries and were intimately tied to global imperial processes of violence, dispossession, and genocide shored up by self-serving and now debunked, scientific theories of racial difference and white supremacy. The knee-jerk rush to defend statues stems in part from discomfort with the work of history itself: to look critically at the “great men” whose lives have been commemorated in this way is to confront the limits of cherished modern myths about tolerance, equality, and multiculturalism.

This is the past, but it is also our present – and, like so much else right now, the stakes involved have been exposed in particularly stark and devastating terms. Focusing too closely on the preservation or destruction of imperialist monuments obscures ongoing efforts to challenge and restructure the relationships and power disparities that, shaped by a violent imperial past, continue to influence our social and political formations today. As Dionne Brand wrote this summer in a searing Toronto Star article about antiblackness and Covid-19, “I’ve been living a pandemic all my life; it is structural rather than viral.”[4] Philanthropy, youth organizations, policing, schools, and statues are constituent parts of the structures of racism and violence. They are also at the heart of the white protestations of innocence, outrage, and “they’re erasing history!” that have erupted of late across the western world.

The official website of President-Elect Joe Biden strikes a different note, stating that he and Kamala Harris (the first Black and South Asian-American woman Vice President-Elect) will work to control Covid-19, combat climate change, and “achieve racial justice.”[5] While we welcome these promises and share a sense of relief that Trump’s “National Garden of American Heroes” is now less likely to see the light of day, it is also more apparent than ever that the 45th President was a symptom of a bigger sickness – and that the problem of colonialism, fascism, and white supremacy is one that transcends national boundaries. In Alberta, for example, the United Conservative Party’s proposed changes to the Kindergarten to Grade 4 Social Studies curriculum – penned by an unqualified “curriculum advisor” whose past statements about reconciliation and education include a condemnation of the KAIROS blanket exercise as “deplorable agitprop” – include erasing all references to Residential Schools and effectively denying their impact on Indigenous children and families.[6]

Looking critically at these developments, as well as at the individuals whose lives have been commemorated in stone, we are reminded that the pasts and presents of modern democratic nation-states and educational institutions are more rooted in violence, dispossession, and genocide than they are in practices of equality and freedom that they hold up as foundational. We are also, more than ever, committed to raising awareness of the fact that history (as opposed to the past) is something people do: an active process based on careful, critical consideration of context and evidence. Within our lifetimes, the political importance of history has never been more clear.

[1] Crystal Gail Fraser, “‘Who’d wear an apron in an igloo!” Indigenous Childhoods, Resistance, and the Refashioning of Girl Guides in the Canadian North, 1950s to 1970s,” unpublished paper. Used with author’s permission.