Kejimkujik National Park and National Historic Site is situated in Mi’km’aki, the traditional lands of the Mi’kmaq. Visitors to the park can learn about the region’s Mi’kmaw past by viewing the site’s many petroglyphs and burial grounds that attest to thousands of years of Mi’kmaw presence or by participating in programs led by Mi’kmaw crafts people such as Todd Labrador, who builds birch bark canoes in the park.

Yet, the history Parks Canada presents at the site is incomplete and obscures a darker truth about Kejimkujik’s past—the history of exploitation and dispossession that made the Park’s creation possible. 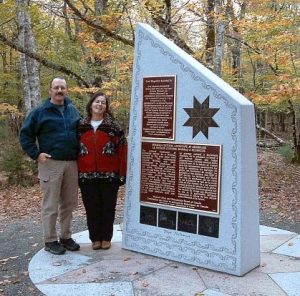 The means by which Kejimkujik National Park was created demonstrates this process. Mi’kmaw activists who protested the Park’s creation in the 1970’s argued that the park contains twelve unceded land reserves and four island reserves that had not been surrendered under the terms of the Indian Act. Fifty percent of these areas front onto Kejimkujik Lake.

As reported in Micmac News in April 1973:

“In 1843 by a provincial Order-in-Council the area was officially listed as an Indian Reserve within the statutes of the province of Nova Scotia, and as early as 1893 non-Indian entrepreneurs saw the terrific hunting, fishing, and timber resources of the area and in 1909, a lease was granted by the DIA to Mr. A. D. Mills, an exporter of white pine, shingles, lathes, and lumber to run what was termed a ‘rod and gun club’”.[1]

Despite government promises that the lease would be for recreational practices, a mill was established on site. In 1914, well known anthropologist Frank Speck visited with the Mi’kmaq from Bear River and mapped out, and published, his understanding of their hunting territories in his book Beothuk and Micmac. Kejimkujik lay at the centre of these territories. 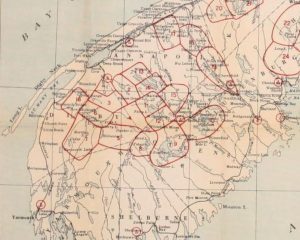 A close-up of the Kejimkujik Hunting Territories from Frank Speck’s 1922 book: Beothuk and Micmac.

These tensions were not resolved at the time of the Park’s designation in 1968. The scheduling of Kejimkujik as a national park in 1974 gave rise to Mi’kmaq protests, as land defenders camped in the park to bring attention to the fact that their land had never been legally surrendered.

These protests stemmed from a long history of settler exploitation, an “improper and illegal surrender” of expropriated land which the government seized from the Mi’kmaq. Beyond illegal seizure of land and resources, it was later revealed that several archeological surveys had been conducted in traditional burial sites without Mi’kmaw permission.

Protestors not only opposed the scheduling of Kejimkujik National Park, an act that would officially complete the Park’s creation, they also fought for access to vital resources within the park—a “sanctuary” and essential space for harvesting resources.[2] While the protests were conducted peacefully, local RCMP tried to scare land defenders away with threats of violence, to which the Mi’kmaq replied “If they start to shoot, then we will shoot back”.[3]

Kejimkujik’s contested formation is not mentioned in contemporary interpretation within the Park.

Within thirty years of the park’s establishment, the Canadian government recognized Kejimkujik’s cultural landscape’s significance by designating it a National Historic Site in 1995. But this commemoration neglects to acknowledge the way Mi’kmaw people were dispossessed of a land that attested to at least 4,000 years of Mi’kmaw occupation.

While Parks Canada is attempting to be mindful of the many calls to action initiated by the Truth and Reconciliation Commission, the agency has failed to reconcile with the fact that building national parks on land used by Indigenous peoples from time immemorial is an act of colonialism.

Collaboration with local Indigenous peoples is a strong step towards healing relations, but at sites like Kejimkujik, there is more work to be done. To dig more into the way history is presented at Kejimkujik National Park and National Historic Site and our discussion on what we think next steps should be towards decolonising the Park, you’ll have to watch our video taking up these discussions, joined by Dr. Jessica DeWitt.

Writer’s Acknowledgement: Kejimkujik is a site in Mi’kma’ki, the traditional and current territory of the Mi’kmaq people. As settler-Canadians working towards reconciliation and decolonisation of Turtle Island, Erin Isaac and Elisabeth Edwards acknowledge the immense burden on Indigenous educators and knowledge keepers to share their histories and have sought to collaborate with Mi’kmaq educators in creating of this project without unduly adding to this burden.