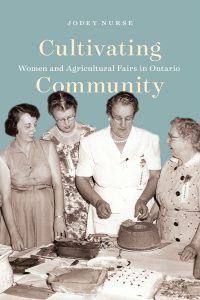 Each year, fall fairs fill schedules in communities across the country. While in recent years, plenty of attention has been given to the increasingly absurd food items that are sold, the fairs have retained some of their agricultural roots. Held in the fall to celebrate the harvest, fairs in the late 19th and early 20th centuries were a mix of trade shows, community building, and an expression of rural Canadian culture. From showcasing produce and livestock to competitions for textiles and baked goods, these events became important sites of political, economic, and social expression, particularly for women, whose participation in all aspects of the fairs further increased the recognition of their critical roles in preserving and growing Canadian agricultural communities.

This is the subject of Cultivating Community: Women and Agricultural Fairs in Ontario, a new book by Jodey Nurse, a Research Assistant Professor at the University of Waterloo. In exploring the growth of Ontario’s fairs well into the 20th century, she shows how women used them to demonstrate all aspects of rural womanhood. This included demanding space in everything from the organization of fairs to the livestock competitions and everything in between. Corresponding with broader political and economic changes at the time, the evolution of the fairs saw the increased role of women significantly contribute to their prosperity. And while Nurse focuses on the situation in Ontario, the book addresses universal themes of agricultural culture in Canada, which is particularly relevant today as the overall proportion of rural populations are shrinking.

In this episode of the History Slam, I talk with Dr. Nurse about the book. We chat about what happened at fairs, who was involved in the planning, and the evolution of what constituted ‘acceptable’ women’s activities. We also discuss the economic challenges and benefits of participating in the fairs, the recognition of women’s contributions, and the materiality of these events. We finish by talking about the women who joined organizational bodies, the challenges of following them in the written archive, and the elements of early century fairs that continue today. If you’re in Guelph, Jodey is having a book launch as part of the Rural History Roundtable at 2:30.