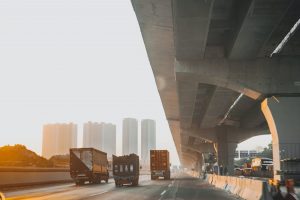 Photo by Indira Tjokorda on Unsplash.

The trucker’s convoys are a serious problem, not because of their demands, nor even their disruptive tactics, but because of their appeal to the many folks, frustrated about their jobs, their lives and the inaction of governments.

Their ostensible goal is to end vaccine mandates.  Which were happening anyway, despite the risk, because all levels of government are facing pressure to ‘open up the economy’. Now that the already planned openings are occurring, the truckers claim victory, and gain a sense of momentum. Vaccine mandates are a not the point. Sure, there are lots of anti-vaxxers mixing with the “We hate Trudeau” crew, while anti-Semites, far right racists and neo-Nazis percolate the mix. Their unity rests not so much on a particular demand, but on anger, propped up by a populist chant of Freedom! They see themselves as fighting elites who don’t care about the ‘little guy’. This puts the rest of us in an awkward position. Few of us wants to be arguing against freedom, or rooting for elites.

But this version of freedom is one the one to do what you want, without any responsibility. The freedom to be selfish, to be racist, to hurt others. This vision becomes clear when we remember that a bunch of these little guys (and yes, they are mostly guys), were part of the United We Roll convoy in 2019, when they were wearing yellow vests, arguing against immigration, the UN and carbon taxes. Rather than freedom, the vision seems to combine survival of the fittest with a rebellious, white supremacist “don’t tell me what to do,” Trumpist tantrum.

They are everywhere, loud, obnoxious and dominating our airwaves and our streets. They are BIG. Not because they have so many people, but because they have trucks. The trucks so complicate things, but that can go in many directions. There have been truck blockades of the border before. I’ve been compiling a dataset of all the border protests over the past fifty years and the tactic is not new. In 1990 truckers shut down the border repeatedly, fighting against the deregulation of their industry, and the conditions of their work. Most of the trucker protests of this era were about defending their economic interests, but there was also solidarity. In June of 1990, blockading BC truckers coordinated with striking nurses. In September 1991, independent truckers blocked the Ambassador Bridge, partly in solidarity with striking PSAC workers, and were joined by farmers and their families.

So the problem isn’t the demands to remove mandates, and it’s not about truckers, or even their tactics (though the horns, geez…). The danger of these protests is that they effectively tap into so much frustration. People are right, the government doesn’t listen, most of the time. People are right, most of the time, we feel powerless. Because these protests are so loud and so obnoxious, they are appealing because they say,  “yeah, this sucks! You should be frustrated!”

They are gaining traction right now, because of this appeal, and also because they are saying what many of the richest, and most powerful believe. They are not getting hit hard by police or the government because of that convergence.  They are not rebels, but simply an angrier version of the status quo. This movement yells the word freedom, but not the freedom to be free of racism; to be free of hunger; to be free of CoVid. Their freedom doesn’t involve working together to protect the most vulnerable. They are very powerful false advertising, and that is their biggest threat.

Lesley Wood is interested in how ideas travel, how power operates, how institutions change, how conversations influence practices, how people resist and how conflict starts, transforms and ends. She is the author of Direct Action, Deliberation and Diffusion (Cambridge University Press 2012) and Crisis and Control: The Militarization of Protest Policing (Pluto/Between the Lines 2014). She also blogs at lesleybikes, the original home of this post.

4 thoughts on “The threat of the truckers protest”