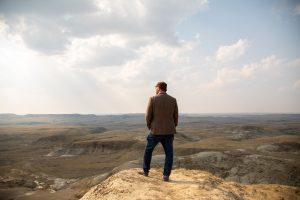 Author, documentarian, and educator Adam Bunch met with one of our editors to talk about his work bringing Canadian history to the masses. This interview has been edited for length and clarity.

SW: One of the things that is notable about your Canadian history documentary series, Canadiana, is how much of the country you visit to make it all come together. Not only do you roam the country seeing cool places, but you must also meet fascinating people. Are there any characters from your experience?

AB: It is one of the big privileges of getting to do Canadiana, that we get to travel so much, all across the country. As a film crew from Toronto, we do a lot of research for each individual episode and learn everything we can, but then get to meet people who dedicate years of their lives, or their whole lives and careers, to exploring the history of that one place that they know so well. So much better than we ever can. Getting to meet people who are that passionate about their own local history, and excited to tell us about it because we’re showing interest and going to share it with a new audience, is one of the most fun parts of doing it.

There was one person we met very briefly when we were in Dawson City filming. One of my co-creators, Kyle Cucco, saw a poster that tipped us off to a story that we’ve now gone back to Dawson City to shoot a whole episode about. It was about when the Dawson City Nuggets hockey team played Ottawa for the Stanley Cup in 1905 and got absolutely thrashed. It was just these guys from Dawson who were looking to strengthen civic pride and help the city forge a new identity in the wake of the gold rush. It was a community-building effort of mostly amateurs who went off to go play the Stanley Cup champions, at a time when you could just challenge them, as long as you were willing to show up in their city to play them. So, they had to travel from Dawson City by dogsled and steamship and train, all across the country for weeks to go play, and lose so badly, to Ottawa, but still win a big moral victory, build that civic pride. And they recreated that match-up in the 1990s, when a team from Dawson City went and played the Senators in Ottawa.

Right after we learned about this for this first time we went to a lookout across the Yukon River. While we were there a family pulled up and started chatting to us, and one of the people, an older man, was telling us all about his childhood growing up in the area, and his family coming down the Yukon River and living just across from Dawson City, telling us about how much it had changed over the course of his life. When he left, he told us his name, Roy Johnson. He was an elder of the Tr?ondëk Hwëch?in, the First Nation whose territory Dawson City was built on. When we looked him up, it turned out he had played in that hockey game in the 1990s recreating the Stanley Cup challenge. And we met him just an hour or so after we had learned it existed. We feel honoured getting to meet people who know so much about their own places, and getting to enjoy coincidences like that, and getting to learn and get excited about stories. 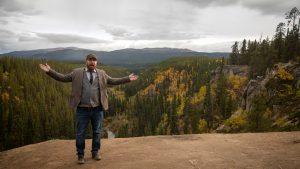 SW: It sounds like, broadly speaking, people are happy that you’ve come to shed light on the local history, but I know something I worry about as a historian based in Toronto is showing up and being the person from Toronto who thinks they know what they’re talking about. How do you navigate those difficulties?

AB: A lot of it is keeping that front of mind all the time, which we try our best to do. We’ve been very cautious about it, and we’ve done fewer Toronto episodes than Toronto probably deserves because we want to make sure we’re not getting caught up in Toronto too much. And, working, whenever possible, in partnership with local people. Our new season is funded in part by Parks Canada, so most of the episodes have some connection with Parks Canada and we worked with them on reviewing scripts. They connected us with local, on-the-ground people working at the sites who are very, very knowledgeable about the history of those sites, who were able to give us leads, give us information, help us a little bit with the scripts, give us access to the sites, and sometimes be with us all day while we were filming to gently correct us when we needed correcting, and make sure we were telling those stories in the most respectful way possible. And on our end, making sure we’re always conscious of that and open to that and changing the things that need to be changed, doing our due diligence and our research, and trying to make sure we’re telling those stories the right way.

AB: I always imagined that when it came time to write a book I’d publish a collection of stories, in part because my background is in storytelling and less the kind of academic research that lets you do a deeper dive into a single subject. Being able to share a bunch of different stories and put them together into something bigger is something that I always wanted to do. So that’s how the Book of the Dead came about, as a bit of a cheat. Not only is death a theme that allows you to tell a lot of interesting stories, it’s also a universal experience. Love is too. So, those themes let you tell almost any story you want to, talk about so many different things. You can piece together an entire history of Toronto from before it was founded to today through those stories — since they’re so universal, they’re always present. Everyone, throughout its history, has those experiences, so through those themes you can tell even bigger stories, which is what I’ve tried to do in both of those books.

SW: Your work was cited in a recent episode of true crime podcast My Favorite Murder. How do you feel about your relationship to true crime media?

AB: It has definitely been an accident. The overlap somehow didn’t occur to me while I was writing the Book of the Dead, but once it was published it became clear pretty quickly. It’s not something I ever intentionally aimed for, so I’ve been very lucky in that it’s an incredibly popular genre that, I think, can be used to get even more people interested in historical stories. True crime is a genre like any other that has good and bad habits; some people are telling those stories more responsibly than others. But you can teach people about some of the bigger historical forces at work in the city’s history once you’ve caught them with a true crime hook.

SW: Are there any stories, either in the Toronto Dreams Project blog, or the books, or on Canadiana, that you want to tell, but you just can’t find the sources or can’t find the way in?

AB: I think for Canadiana we have a list of about a hundred episodes we’d like to do some day, and sometimes it will turn out you don’t have the resources you need to be able to do that. It’s important, for instance, for us to make sure we’re doing stories about the North. But it is obviously harder to get to the North, and, as a film crew from Toronto, those are also the stories that we need be the most diligent and careful about telling, as are any stories that involve people who are not a bunch of white filmmakers from Toronto. That is just about everybody, but particularly Indigenous stories, other people of colour, stories that we want to make sure we are spending the right amount of time on and doing in partnership with those people. Sometimes that is not a story we should be telling. So that is maybe what leaps to mind when you ask that question. That there are some limits to the stories that are ours to tell.

Adam Bunch (@TODreamsProject) is creator of the Toronto Dreams Project, a collection of creative and factual histories of Toronto. He also wrote The Toronto Book of the Dead and The Toronto Book of Love and is co-creator of Canadiana, a documentary series exploring some of “the most incredible stories in Canadian history.”