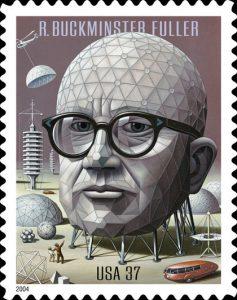 In 1968, American architect R. Buckminster Fuller visited London, Ontario. Known for his geodesic domes, Fuller spent his time in the city meeting with students, artists, and industrial planners at Western. For years, Fuller’s visit has been part of the city’s lore, a moment in time where the city attracted praise from a one of the world’s most influential designers. Part of that lore, however, came from the fact that there wasn’t a lot left by Fuller himself. The stories emerging from the visit were first hand accounts of those who were there, although there were constant whispers that a speech had been recorded.

A few years ago, that speech was found in the archives by Kirsty Robertson. As she was conducting research on artist Greg Curnoe, she noticed that there was a note in the file about a recording he had made of R. Buckminster Fuller. Once located, the recording had to be transferred to a modern technology and what was there was a difficult to hear, but remarkable moment in London’s history.

The impact of that moment is the subject of the new exhibition From Remote Stars. Curated by Kirsty Robertson and Sarah E.K. Smith, it features works by 22 London, Ontario artists who explore Fuller’s futuristic theories. The pieces included in the exhibit, which range from the 1960s to the present, suggest different pathways to the future and address some of the biggest issues confronting modern societies, from climate change to globalism. In addition to the exhibition, there is also the From Remote Stars podcast, which further examines Fuller’s time in London and is a wonderful complement to the exhibition’s themes. If you’re in London, From Remote Stars is open at Museum London until May 15.

In this episode of the History Slam, I talk with curators Kirsty Robertson and Sarah E.K. Smith about the exhibition and podcast. We discuss finding the recording and what’s on it (7:52), the influence of the 1960s on Fuller’s speech and how that is reflected in the exhibition (17:30), and Fuller’s impact on London (20:11). We also chat about centering a narrative in an exhibition designed for non-specialists (24:40), the podcast and its connection to the physical exhibition (31:38), and the benefits of different types of historical products (35:14).