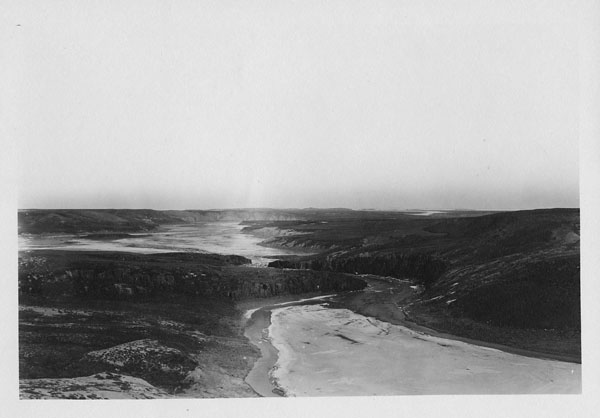 Nearly every time I review archival documents, I bump into a story that I’m desperate to pursue, but it is not relevant to the project at hand. This time I decided to just do it. My Google Alerts tell me it is time; Parks Canada’s underwater archaeology team recently announced they are returning to the Franklin Expedition shipwrecks after a two-year pause. This story is about one of the people who searched for the Franklin crews when there was still hope of finding them alive. We are most fortunate Judith Desjarlais told her own story. It appears no one else did.

At first glance it is not surprising a Métis woman joined a Franklin relief expedition. European travelers often relied on Indigenous women to feed, clothe, and shoe the party, translate, negotiate, and guide, and generally keep everyone alive and upright. Dr. John Rae, the Orcadian physician turned fur trader turned explorer[1], openly admired the Indigenous women he encountered and valued their skills.[2] He was also unusual among his contemporaries because he usually named the Indigenous people he wrote about.[3] I read through Rae’s correspondence, journals, and autobiography, and historians’ accounts of his expeditions, but found no reference to Judith Desjarlais (or any other woman) in the parties.

My first order of business was to determine which Rae expedition Desjarlais probably joined. Rae went on multiple journeys to search for evidence of the Franklin Expedition, in 1848, 1849, 1851, and 1853-1854. It is notable, however, that she called the journey a “relief expedition.” The Franklin Expedition was fully provisioned for three years when they left England in May 1845, so in 1848 and 1849 there was hope of finding them alive.

I checked who was documented on Rae’s Franklin search parties. While the 1848 journey was manned by (apparently useless) British sailors[4], the personnel list in 1849 which provided a pretty definitive clue; the 1849 party included a James Hope.

When Judith Desjarlais applied for scrip she was married to Louison Cardinal, but noted her first husband was named “James Hopp.” Scrip applications for their children confirm he actually (or also) went by James Hope. Their daughter Flora’s application added another layer of evidence; while Judith Desjarlais (reaching back through over 50 years of memory) attested Flora was born at Lac La Biche around 1847, Flora’s own scrip noted she was born on Slave Lake in 1848. The Hudson’s Bay Company’s Mackenzie River District accounts for James Hope suggest he had a family with him there. In Outfit 1846 he purchased women’s and girls’ hose and shoes, while in Outfit 1845 he purchased girls’ hose and boys’ shoes. Hope’s Outfit 1849 purchases were not as specifically gendered but did include ribbons and shawls. It is not clear exactly where James Hope was posted in 1848; Flora Hope could have been born at any number of Mackenzie River District posts on Great Slave Lake. Considering these details, I became quite certain Judith Desjarlais joined John Rae’s 1849 expedition.

According to Rae the journey was “perfectly barren of results.”[5] On June 9, 1849, Rae with his party of five men (and, perhaps, one woman) left Fort Confidence and headed toward Woolastonland via the Kendall and Coppermine Rivers. They intended to cross Dolphin and Union Strait and “examine the shores very closely for any traces of Franklin’s ships or any part of their crews, and question all Esquimaux that we fall in with” [6] but the ice stayed too late in the season; the party turned back in August and arrived at Fort Simpson in late September 1849 without ever crossing the Strait.[7] Rae dutifully reported the expedition to his superiors at the Hudson’s Bay Company and the Admiralty[8] but did not bother to write a narrative for his autobiography. Instead, he reproduced his letter to the Admiralty.[9] This could account for Judith Desjarlais’ absence from the story, since Rae may have decided her presence was not of interest to the HBC or Admiralty.

Learning more about James Hope also hinted at a possible reason why Judith Desjarlais was erased from Rae’s record of the 1849 expedition; Rae wholeheartedly despised her husband.

At Bloody Falls in the Coppermine River, James Hope convinced the party to avoid a portage by dragging the boat through rapids. At some point in the process Hope made a wrong move and, in attempting to save the boat, Rae’s valued interpreter Albert One-Eye drowned. Rae openly detested Hope from then on.[10] In his report to George Simpson, Governor of the HBC, Rae wrote “[t]his melancholy accident has distressed me more than I can well express.” “The sole blame of the loss of the boat and consequent drowning of Albert rests on the shoulders of the Steersman James Hope.” Rae covered for himself, explaining he only hired Hope in the first place for his experience with similar missions; “His character in other respects was very bad being a notorious thief and equally noted for falsehood.”[11] In his report to the Secretary of the Admiralty Rae again attacked Hope’s decisions and character. “On James Hope the steersman,” he wrote, “rests all blame of the loss of the boat; his carelessness…and his cowardice…can admit no excuse.”[12]

Rae’s journals, correspondence, and autobiography reveal a person who was accomplished and driven, but prone to view others scornfully. He was a skilled hunter and trapper[13] who knew how to repair his own moccasins and make his own snowshoes, so would not have relied too heavily on Judith Desjarlais’ assistance.[14] Since she was associated with the hated James Hope, Rae may have chosen to forget her, and nearly rob her of her place in the documentary history of the Franklin search.

One woman, Lady Jane Franklin, towers over the history of the Franklin search. She spent thousands of pounds and sent multiple ships after her lost husband and his crew. Thanks to a passing comment from Judith Desjarlais, we can add another woman to the story.

Editor’s note: This post was updated to correct a typographical error.