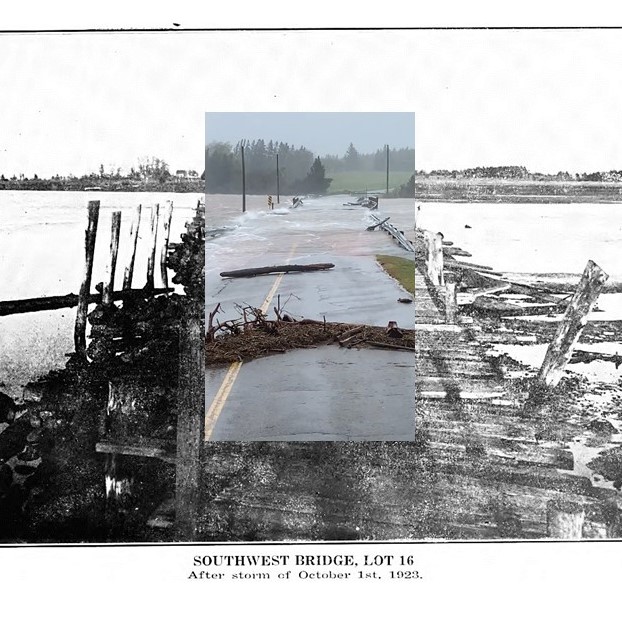 Photo of Southwest Bridge, Lot 16, after 1923 storm, from Annual Report of the Department of Public Works of the Province of PEI, 1924, overlain by still from video by @savage_sultin of unidentified bridge after 2022 storm.

Rarely have I wanted so much to be on Prince Edward Island; never have I been so glad not to be there. It’s been hard to watch from a distance the disaster of Hurricane Fiona as it has unrolled slowly, then suddenly, then slowly again. Meteorologists warned days in advance that at landfall it would likely have the lowest recorded barometric pressure in Canadian history. (It did.) News sites began posting the requisite photos of empty grocery store shelves. Folks hauled out their emergency vocabularies: “batten hatches,” “hunker down.” And then, beginning in the early morning of 24 September, word of the storm’s arrival came, in the form of photos and videos on social media. Dark downpours, flooded streets. By daylight, there were scenes of washed-out roads, the twisted wreckage of buildings, and so many, many, many downed trees. It would be another day before attention began to be paid to the lost dunes on the Island’s North Shore beaches; another day still before satellite imagery from the Canadian Space Agency exposed the scale of widespread coastal erosion. And for many people, the disaster is still far from over: their power is still out, the trees still dead, broken, and in the way, and the roofs, cottages, and barns still needing repair or replacement. In a week, Islanders went from stockpiling storm chips to throwing out freezer food.

Whether to better understand the present or to distract myself from it, at the height of Fiona I researched a hurricane from PEI’s past.[1] Ninety-nine years ago, on 1 October 1923, Prince Edward Island was hit by one of its worst storms ever, a post-tropical cyclone that much resembled Fiona. This was prior to the naming of such storms, and to the degree that it is remembered at all today it is just “Hurricane Five” of the 1923 season.

The storm arrived with almost no warning. In that era, the Meteorological Service of Canada headquartered out of Toronto was only capable of making twice-daily forecasts looking 36 hours into the future, so it was not until the morning itself that Charlottetown received a storm signal. By that point, the wind and rain were already raging.[2]

The next day, having had no chance to warn readers of the storm’s approach, the Guardian newspaper settled for documenting its devastation. The order of that cataloguing over the days and weeks that followed speaks to the visibility and the significance assigned various forms of damage. In its first report, the Guardian described how the whole Island “presents the appearance of having been swept by a cyclone.” The storms had taken down trees, blocking roads, and had knocked out the telegraph, telephone, and electric light systems. Of greatest worry to this agricultural province, the winds had flattened the grain crop in the fields; it was feared that it was entirely ruined.

The gale had been so severe, according to the newspaper, “that the sea did not rise as usual in ordinary storms, but was ‘skimmed’ by the terrific wind” – pushing water ahead of it. Today we would call that a storm surge, and in the 1923 aftermath Islanders learned just how damaging one could be. On 3 October, the Guardian reported that the wharves at Rocky Point and Georgetown, a lighthouse at Tracadie, and railway lines at Midgell and St. Peters had all been destroyed. But worst of all, the sea had pushed deep into the province’s rivers and estuaries and carried scores of bridges away with it. Initially, the newspaper listed 20 bridges that were washed away or impassable, but as more reports came in, that number grew, until it reached almost 60 by 26 October. Many of these bridges had dotted the coast, but some had stood kilometres inland – such as Crooked Creek Bridge in Oyster Bed, five kilometres from the Island’s outer shore. 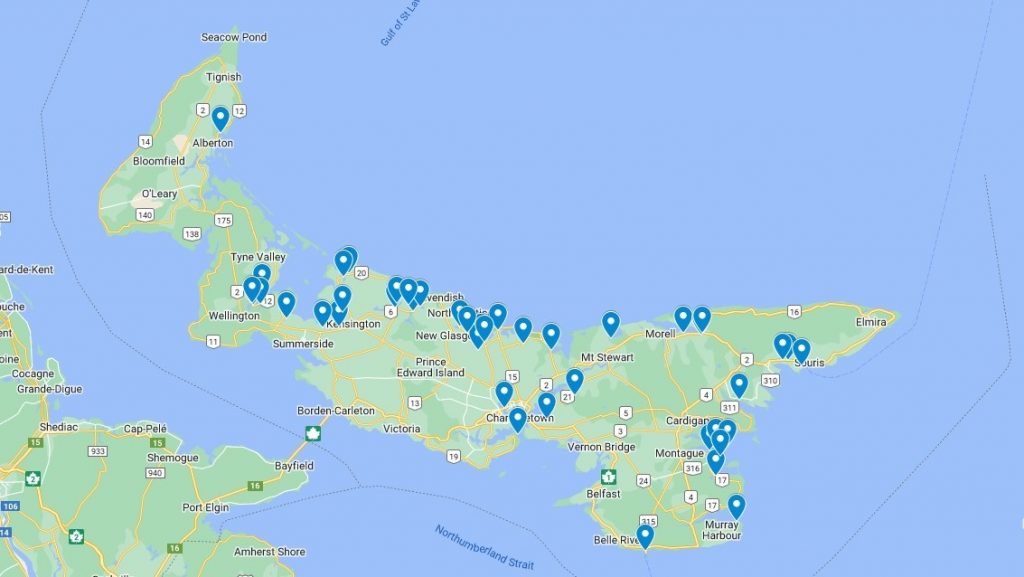 Image of Google map of bridges and other infrastructure destroyed or damaged in 1923 storm.

I have created a Google map of more than 50 bridges – plus dams, roads, wharves, etc – extending all across the north and east shores of the Island, that were identified as having been destroyed or damaged in the 1923 surge.[3] The bridges came to define the storm, perhaps because their destruction and eventual repair were of significance to all Islanders. (A rising tide might lift all taxes.) It thus became a political question whether the previous administration had left public works in disarray. The Guardian wrote, “The storm has practically finished the wreck left by the late Government.”[4]

To be sure, the newspaper also chronicled some of the storm’s more human-scale effects. It told of individual farmers who had lost barns. Of fishermen’s stages destroyed, of boats that dragged their anchor or broke free of their moorings. Of apple and plum crops entirely on the ground. (As evidence of a hurricane’s passing, no hanging fruit really is low-hanging fruit.) But the grain turned out to be in better shape than initially feared, and the seed potato crop was believed to be undamaged.[5]

To a 2022 reader, what is most conspicuous in the Guardian’s coverage of the hurricane is two effects it did not discuss. For one, there was no word of downed trees across the province. The newspaper did mention, repeatedly, trees lost in the capital. “The latest storm will be memorable in Charlottetown as that in which the greatest number of ornamental trees were felled.”[6] Yet the newspaper never referenced windthrown trees elsewhere. There had to be many – there is simply no chance that a hurricane hitting the entire province only blew down trees in an urban area in its centre. In fact, there is one source that proves this. The following summer, author L.M. Montgomery lamented in her journal about the condition of “Lover’s Lane” at the farm of her friends the Webbs in Cavendish – the farm that became known as Green Gables. “A terrific storm last fall played havoc with what was left of the old trees,” Montgomery wrote. “The poor old lane has some remnants of beauty here and there but it is sadly unlike what it was….”[7] Downed trees throughout the countryside would have been a significant problem for reasons beyond aesthetics. In the short term, they would hamper travel by road, rail, and, come wintertime, sleigh. In the longer term, they might even affect fuel supply, since the vast majority of Islanders still burned firewood.[8] 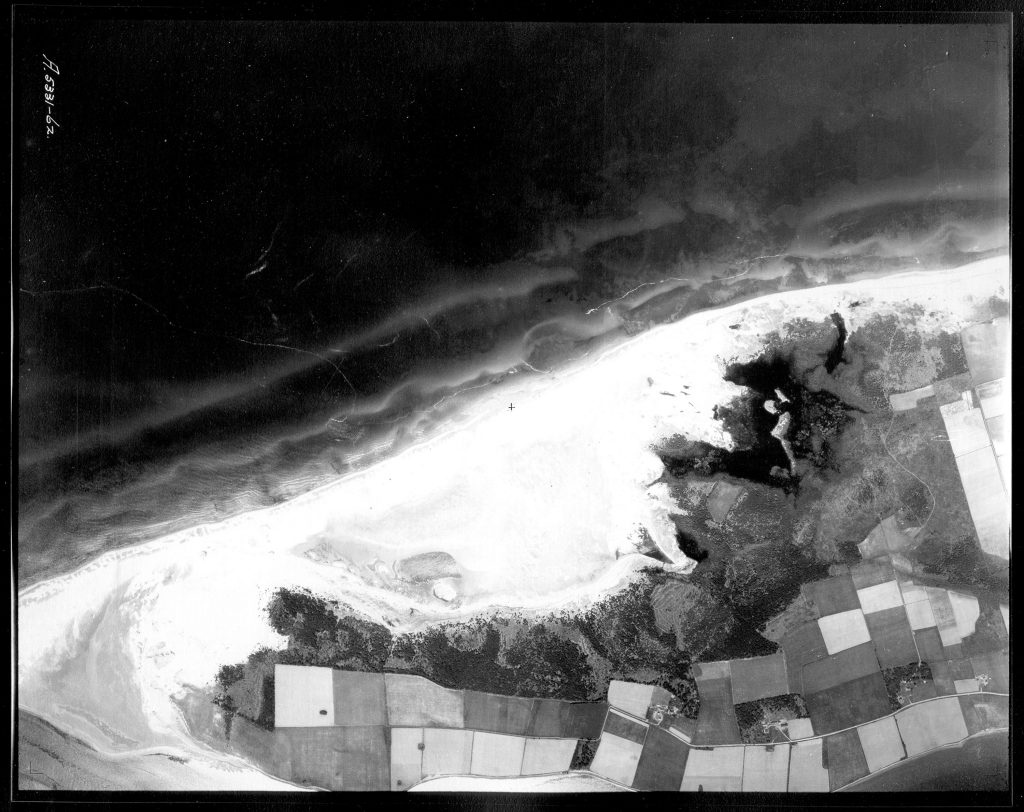 The other thing missing from the newspaper’s coverage was any mention whatsoever of coastal erosion. The storm surge that pushed immense volumes of water kilometres inland would have displaced immense volumes of sand and soil – i.e., the Island itself. In fact, twenty-first century geologists have studied the 1923 hurricane’s effects on the large dune system of Greenwich, on the province’s north shore (and now part of PEI National Park).[9] They conclude that it caused a “catastrophic overwash”: the surge pushed a five-kilometre-long line of dunes as much as 600 metres inland, simultaneously creating a new high-water line and a new inland dune system. But the Guardian, which proudly carried the slogan “Covers Prince Edward Island Like the Dew,” made no reference either in 1923 or subsequently to coastal change either in Greenwich or anywhere else in the province. It was not worthy of mention, or perhaps notice. 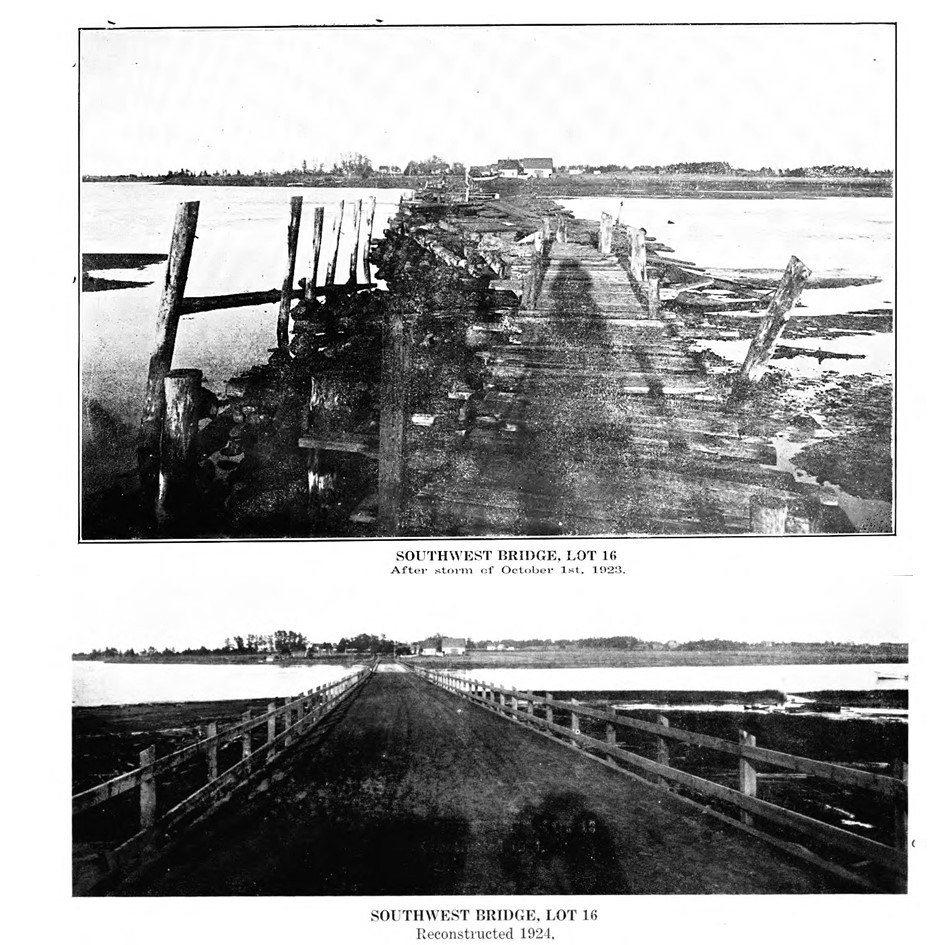 Photos of Southwest Bridge destroyed 1923 and repaired 1924, from Annual Report of the Department of Public Works of the Province of PEI, 1924.

A mild attempt was made to have 1923’s Hurricane Five join the pantheon of great PEI storms. In 1927, the Guardian editor wrote that the province had only ever experienced four memorable storms – “All the others were comparatively mild breezes” – and listed the 1851 Yankee Gale, the 1869 Saxby Gale, the 1873 August Gale, and the 1923 October Gale.[10] But the name did not stick – I have found no other references to it. Neither did the storm itself. The hurricane of 1923 had been defined largely by the scores of bridges that it had destroyed, and once those were replaced or repaired – remarkably quickly, in fact – there was little reason for Islanders to remember it.

It feels like a kind of progress over the past century that this time, in the aftermath of Fiona, the long-term significance to the Island of the loss of trees and coastline was recognized immediately. But the trees were already top of mind, of course, because they impeded traffic and knocked out power. And for many people, the lost shoreline speaks first and foremost to the threat to homes and cottages built too close to the water. What’s more, healthy forests and attractive beaches contribute to the Island’s tourist image, so the blasted forests and sand-stripped beaches are lamented at least in part because they are of economic concern.

But beyond all that, it is impossible to interpret the road from Five to Fiona as one of growing understanding of and respect for the natural world’s importance, because humanity itself played a part in Fiona’s severity. In warming the planet 1°C over the past century, we have warmed the North Atlantic, allowing tropical hurricanes to maintain strength longer along their northward path. And we have built along the water, built into the woods, to meet the storms that we help bring.

Thanks to Barbara Rousseau and Joshua MacFadyen for their moral and material support in writing this post. Best wishes to them and all in Atlantic Canada cleaning up after Fiona.

[1] As the remainder of this post demonstrates, my starting point and main source was the indispensable islandnewspapers.ca.

[2]  For the effects of Hurricane Five on the rest of Atlantic Canada, see Environment Canada, “Storm Impact Summaries.”

[8] True, PEI was considerably less forested than it is today. See Douglas Sobey and Joshua MacFadyen chapters in Time and a Place: An Environmental History of Prince Edward Island, eds. Edward MacDonald, Joshua MacFadyen, and Irene Novaczek (McGill-Queen’s UP, 2016). That conceivably meant downed trees were less of a factor to road travel – but also that their loss had a greater effect on wood supply.

[9] For reasons unclear, the authors call the 1 October 1923 storm responsible for the erosion Hurricane Two, not Five.

[10] A modern accounting of hurricane-season storms would undoubtedly include the 2019 Hurricane Dorian.