The report of the CHA Task Force on the Future of the History PhD in Canada is now available (in English and in French). This is the third in a series of posts by Task Force members, offering their perspectives on selected themes from the report. Activehistory.ca encourages readers to join in the conversation, either in the comments or on social media, or by submitting a response piece to be considered for publication upon the series’ completion.

Many – if not almost all – fledging historians pursue a PhD degree with the intention of becoming a university professor. They do so well-aware of the word on the street: the academic job market offers few jobs for historians. The American Historical Association has substantiated the bleak common sense by reporting on academic hiring in the US and describing where historians actually work. I pursued similar research as a member of the CHA Task Force on the Future of the History PhD in Canada. In this blog post, I review what I learned about the employment situation by looking at the sought-after job category, the tenure-track assistant professor in History.

New Tenure-Track Assistant Professors in History in Canada, 2016-17 to 2021-22, by Where They Completed Their PhD

60% of the new hires obtained a PhD in Canada. 31% did their degree in the United States (with 21 of 27 historians having attended what can be considered an elite American university). The remaining 9% attended a British or French university.

It appears that 48 (55%) of assistant professor hires were women, 38 (44%) were men, and 1 identified as non-binary. It also appears that 9 were Indigenous, 11 were Black, and 13 were other visible minorities.

Citizenship information is confidential, but I nonetheless tried to explore the citizenship question by reviewing the educational, biographical, and work histories of all 87 professors. I present my work cautiously. 62 appeared to be Canadian citizens; another 4 were most likely Canadian; another 4 did their PhDs in Canada and would likely have qualified to apply for landed immigrant status prior to entering the job market. 17 hires had no apparent ties to Canada prior beginning employment in a History department in Canada. Allowing for errors, something like 15 to 22 (or 17-25%) of tenure-track assistant professor jobs in History went to historians who were neither Canadian citizens nor landed immigrants at the time of their hiring. However, a corollary is that the number of Canadians hired comfortably eclipsed the number of historians who completed their dissertations in Canada. It appears that 14 Canadians (16% of hires) earned PhDs abroad and returned to accept jobs in Canada.

Not all of the new assistant professors held History PhDs. I noted historians with PhD degrees in the following disciplines: Canadian Studies; Indigenous Studies; Afro-American Studies; Near and Middle Eastern Civilizations; Sociology; Art History; Classics; Theatre Studies; Divinity; and variously named science and technology studies programs. Altogether, the not-quite-exhaustively-checked total was 12 – or 14% of all hirings.

I was also interested in learning how quickly academic historians secured a tenure-track position after completing their PhD. The below figure displays my determinations. The category “Lateral Hires” refers to historians who previously held a tenure-track position prior to accepting an equivalent role at a Canadian university. The category “0” counts historians who became a professor during or immediately at the end of the academic year in which they finished their dissertation. Zero full academic years elapsed between degree and employment.[1] The other categories treat “academic years elapsed” the same way. 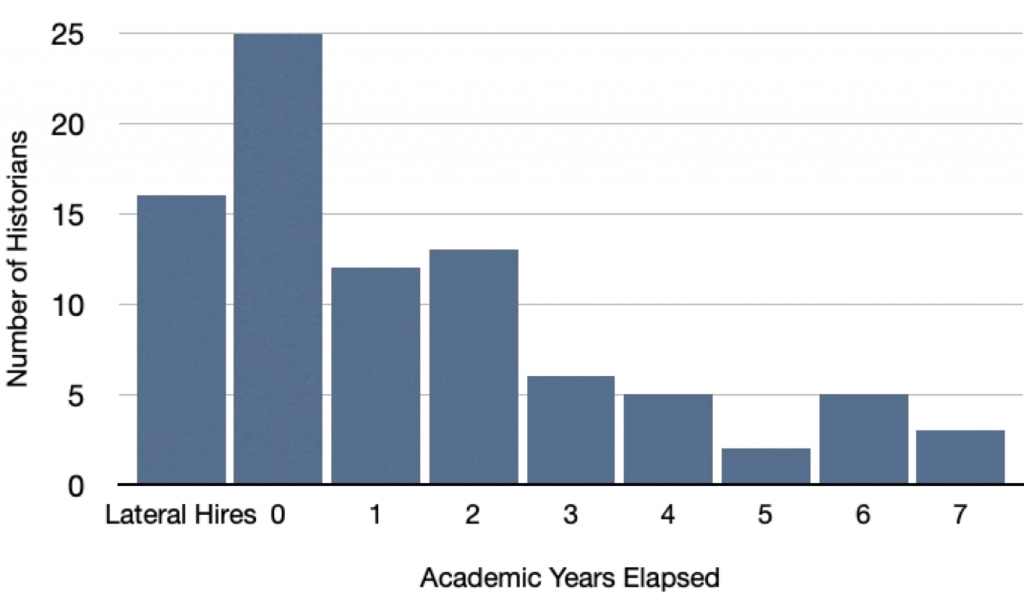 Time Elapsed from PhD Completion to Tenure-Track Assistant Professor Position in History in Canada, 2016-17 to 2021-22

If we set aside the lateral hires, the average time elapsed between degree completion and tenure-track employment was slightly less than 2 academic years. The median time elapsed was 1 academic year. It was most common for tenure-track assistant professors (25 of 71) to begin work immediately following their degree completion. Among the remainder, 40 of 46 held a postdoctoral fellowship for at least part of the interim between their degree and their tenure-track job. Another three held teaching-focused contract positions.

Based on their dissertations, I sorted new assistant professors by temporal focus, geographical area, and field of study. As the below figures summarize, 54 (62%) examined the 20th century in their dissertation, trailed by 16 (18%) who considered the 19th century and 10 (11%) who wrote about the early modern period. Social history (25%) was the leading primary field of study, but contributions were well-spread among fields. Information on geographical focus is included in the table below. 43% of hires examined the history of Canada or Canadian-claimed Indigenous territories.

New Tenure-Track Assistant Professors in History in Canada, 2016-17 to 2021-22, by Temporal Focus and Field of Study

The preceding analysis focused on the “demand side” of the academic labour market in History. I also gathered “supply side” information based on completed History dissertations in Canada. 562 historians earned a PhD between September 2016 to August 2022. Thus far, 58 (10%) have secured tenure-track employment (with 23 doing so immediately after finishing their PhD). The total should rise to some small extent over the next few years, as very recent graduates accept tenure-track positions. Of those joining the professoriate, 45 work in History departments, while 13 work in departments beyond the discipline. Only 36 (6%) work at Canadian universities, with another 22 (4%) employed at universities in the United States, Europe, South Asia, East Asia, or Australia. When these factors are considered together, 28 (5%) took a tenure-track job in a History department in Canada.

As a final flourish, the Task Force report compared information from the demand side (87 hires) and supply side (562 PhDs) regarding the Canadian academic labour market in History. Our aim was to roughly estimate how likely someone who earned a History PhD in Canada was to secure a tenure-track assistant professor position in a History department in Canada. In the below table, we sorted the analysis by geographic area of study. The overall proportion was 9%.

Tenure-Track Assistant Professor Hirings in History in Canada in relation to Completed History PhDs in Canada, by Geographic Area, 2016-17 to 2021-22

With all these ins and outs of academic hiring in mind, we can land on the overarching punchline. Most History PhD students strive to become a university professor. Little more than 10% of History PhD graduates in Canada are securing tenure-track assistant professor positions in the present academic labour market. And fewer than that — approximately 5-9% of graduates — find such work in a History department at a Canadian university.