The report of the CHA Task Force on the Future of the History PhD in Canada is now available (in English and in French). This is the second in a series of posts by Task Force members, offering their perspectives on selected themes from the report. Activehistory.ca encourages readers to join in the conversation, either in the comments or on social media, or by submitting a response piece to be considered for publication upon the series’ completion.

How long does it take to complete a History PhD? As a member of the CHA Task Force on the Future of History PhD in Canada, I conducted research to find out. The work built on a data set of the 562 History dissertations completed in Canada between September 2016 and August 2022.

To measure “time to completion,” I made several choices. In my view, the work of a PhD is done when a defended dissertation is submitted to a university’s online thesis repository. I wasn’t interested in how long students went on to wait to graduate. Therefore, a completion date for each dissertation was determined based on the repository submission metadata.

Figuring out when each PhD graduate began their program was not as simple. I initially contacted some graduate chairs and assistants, but there were privacy concerns in some provinces about revealing information about PhD students. Seeking another avenue, I realized that many recent graduates self-reported their PhD program start dates, either on LinkedIn or through curriculum vitae posted to sites like academia.edu. It didn’t even matter if the cv was an internet artifact from a past academic life. As long as graduates somewhere identified when they began their PhD studies, I was laughing. With end dates and many start dates in hand, I determined 355 case-specific completion times. I rounded each completion time to the nearest month.

My method of counting has a notable limitation: it is insensitive to any student who took a parental or health-related leave. Such details are confidential. I also have not accounted for any student who temporarily withdrew from a program to save on tuition or to take gainful employment. But doing a PhD is work. If economic pressures see students choose to interrupt their enrolment, that can hardly be considered external to PhD programs. (Nor can permanent withdrawals be ignored, yet the Task Force was not in a position to secure reliable data on PhD non-completion.) I view the fancy accounting some departments perform – counting only the periods during which a student was enrolled – with suspicion. In short, the Task Force’s “time to completion” describes the time from when students began their PhD program until they deposited their defended dissertations.

In the Task Force report, the results of my analysis are presented in two ways. In the below figure, a bar graph shows how many dissertations were completed in each month elapsed during a PhD program. The spikes in the graph illustrate that many students completed, or just missed completing, their dissertations at the turn of each academic year. The median completion time was 6 years 1 month. 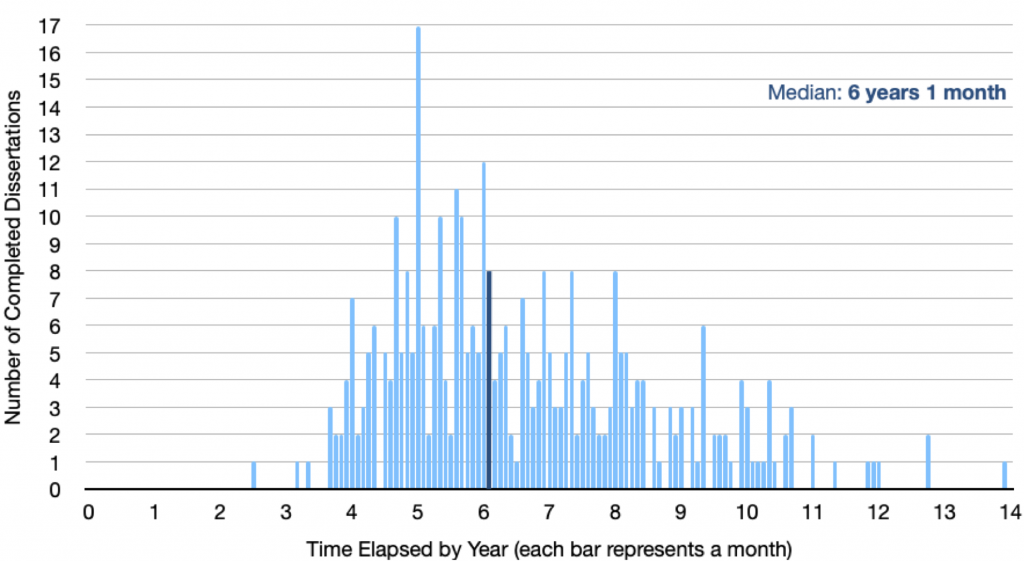 The second figure is even more revealing. It shows the cumulative percentage of History dissertations completed relative to elapsed time from entering a PhD program. By the end of year 4, slightly less than 6% of students who did complete their degrees had completed. By the end of year 5, the percentage was just over 25%. By contrast, 35% of dissertations took longer than 7 years. The average completion time was 6 years 7 months. 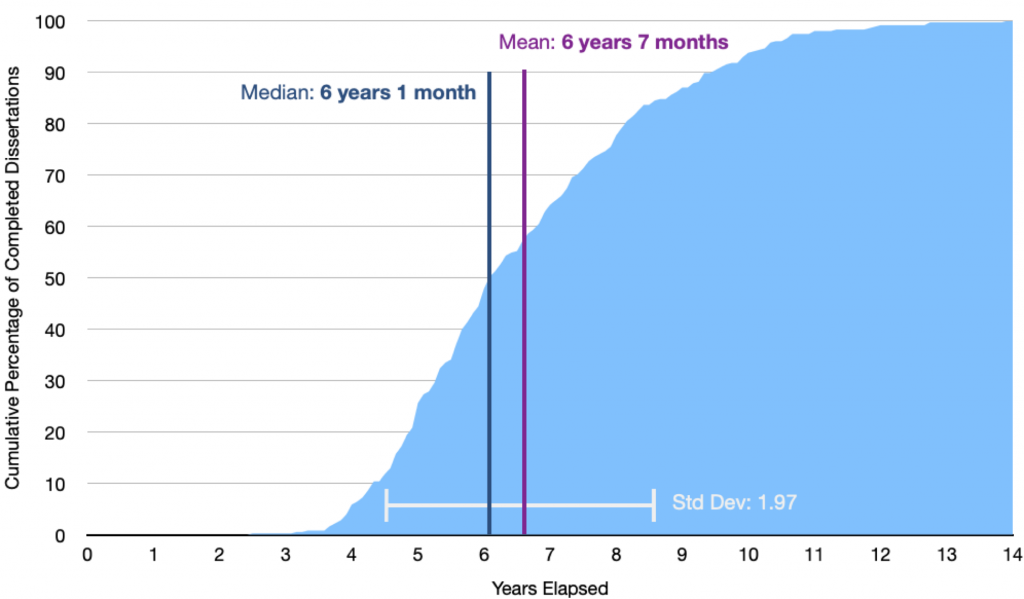 I was also able to calculate average completion times for 13 departments: they ranged from 5.25 to 8.41 years. Departments could calculate their own statistics if they would like see how their PhD programs match up with the overall pattern.

How long should it take to complete a History PhD? According to program descriptions on department websites, expected completion ranges from 4 to 6 years (see Appendix 2 of the report). But most programs guarantee four years of minimum funding. And although a handful of programs have moved towards five-year funding (and York to six), others promise three, two, or none. Moreover, the Task Force report demonstrates that, in systemic fashion, minimum funding levels fall below Canada’s official poverty line. Underfunding PhD students is an equity issue: it means that only some people can really afford to do a PhD — and even fewer as the cost of living rises.

Given existing funding commitments, History PhDs are only supposed to take 4 or 5 years. In practice, the median and mean completion times exceed 6 years. To avoid students incurring debt as a matter of course (pun intended), departments ought to consider some combination of extending funding guarantees to better reflect how long PhDs take and revising program requirements to facilitate speedier completion.

One thought on “Time to Completion of History PhDs in Canada”