Many Canadians are finally coming to terms with the truth that the Canadian government, in co-operation with Christian churches, ran a genocidal school system targeting Indigenous Peoples for more than a century.

What most people do not realize, however, is that Canada’s system of “Indian education” was not limited to Indian Residential Schools. It also included combined schools (for settler and Indigenous students), sanatoriums and tuberculosis hospitals, and a vast network of nearly 700 federally funded and church-run Indian Day Schools, which were attended by an estimated 200,000 Indigenous people between 1870 and 2000. 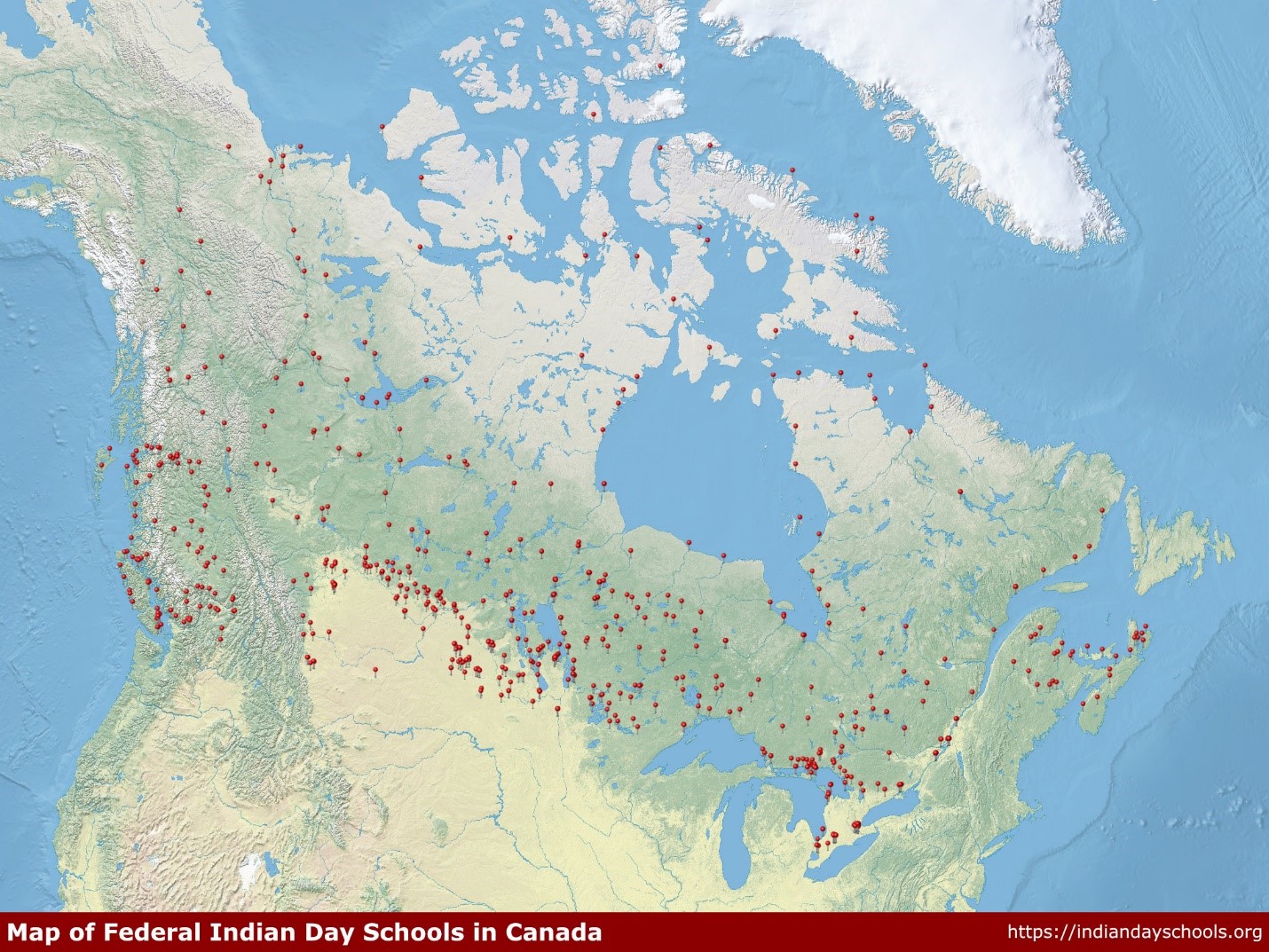 In its 2015 Final Report, the Truth and Reconciliation Commission (TRC) showed Canadians the truth about the IRS system, but there will be no such truth-telling commission for Indian Day Schools. Instead, there is a national Class Action that seeks acknowledgement and compensation for the damages and abuses suffered by Survivors who attended Indian Day Schools and were excluded from the Indian Residential School Settlement Agreement. The Class Action deadline closed on July 13, 2022, but Class Members can now apply for an extension until January 13, 2023.

To help support Survivors and to raise more awareness about Indian Day Schools in Canada, we are writing this article to share more information about the system through our recent work using digital history and GIS (or Geographic Information System) mapping.

In the 1860s, the federal government extended partnerships with Christian missions and offered to pay more for schooling as a way of gaining greater influence and authority over Indigenous Peoples. In the 1870s, the model of supporting mission day schools for Indigenous children was expanded to other parts of the country and was overseen by the Indian Branch and then the Department of Indian Affairs. In the 1880s, the federal government extended this church-state partnership to create a network of boarding schools for Indigenous children and youth, which is today known as the Indian Residential School system.

Despite some of their differences, notably that day school students mostly returned home at the end of the day, the two kinds of schools need to be understood as interrelated parts of Canada’s assimilationist schooling project.

There is, however, limited scholarship on Indian Day Schools in Canada when compared to Indian Residential Schools. One consequence of this knowledge gap is that Indian Day School Survivors have had to fight to establish basic truths about the system, such as where schools were located and who attended them.

To support this work, a number of research partners collaborated to use digital history techniques and GIS mapping to create an online resource for Survivors that can also communicate and share information about the Indian Day School system widely.

The creation of the website (www.indiandayschools.org) took 2 years and used publicly accessible information from two main sources. The first was from the class action Schedule K—List of Federal Indian Day Schools to indicate the location of each school to be visualized on a map. The second was RG10 (1879–1953) school files from Library and Archives of Canada, which were re-digitized using techniques such as optical character recognition and compressing the PDF files in order to accurately link each specific file to the correct Indian Day School on the map. An M.Ed student and digital history researcher, Benjamin Farmer Lacombe, coded and implemented the mapping features while Jackson Pind and Theodore Christou provided the historical guidance for the website.

After the www.indiandayschools.org platform was launched in May of 2022, Pind, Carleton, and Lacombe collaborated to create the following timelapse map – which we are sharing officially for the first time – showing the development of the Indian Day School system from the 1860s to 2000 using the features of the platform. (Tip: you can save and then insert the map as an image to share on social media or insert into a PowerPoint etc., for teaching/presentation purposes).

Though mission day schools were in existence prior to the 1860s, the List of Federal Indian Day Schools for the Class Action begins in the 1860s, which is why we’ve chosen to start the GIF at that point. The federal government’s heavy involvement in what is now known as the Indian Day School system then really gets going in the 1870s and 1880s.

The timelapse map communicates information in new ways, illustrating the pattern of slow growth prior to WWII—while the Indian Residential School system was the DIA’s preferred form of Indian education—and then the large increase after WWII and the expansion into the North in the 1960s and 1970s.

As part of our work, we also realized that the archival information is unavailable as a result of privacy concerns during the peak of the system between 1953 and the 1960s, increasing the need for oral histories from these decades. However, new questions can also be generated by focusing on one part of the country and trying to understand why the schools either appear or disappear at a particular time, which can be connected to other significant developments in the local area including but limited to treaty history, resource development, or railway expansions (which Jim Clifford has been working on).

A powerful teaching exercise is simply reading a short history section about Indian Day Schools  from one of these books and then sharing the GIF to illustrate that relatively little is known about the almost 700 schools that operated in Canada for over a century. The GIF takes about one minute to play and, in our experience sharing with students and colleagues, does an excellent job of showing the scope, length, and impact of this system across Indigenous lands.

Despite numerous concerns, on January 13, 2023, the Class Action will officially end and a new chapter of remembering will begin. Survivors have been asking to be heard, and we must actively respond to their wishes to listen and learn more as part of putting truth before reconciliation.

Jackson Pind is a mixed Settler-Anishinaabe historian of Indigenous education. He is currently an Assistant Professor, Indigenous Methodologies at the Chanie Wenjack School of Indigenous Studies at Trent University

Sean Carleton is a settler historian and an Assistant Professor in the Departments of History and Indigenous Studies at the University of Manitoba.