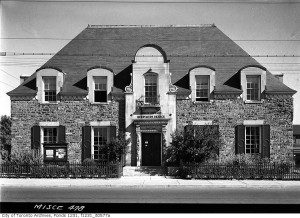 On Tuesday, September 14th the Toronto Public Library (TPL) will kick off its 6 part History Matters lecture series.  As you might have guessed from the title, the idea for the series was inspired by what’s been going on over the past couple years with the folks at Active History – both at the blog and the 2008 conference.  My goal for organizing the series with the library was to encourage the development of community and exchange between active Toronto historians and the broader Toronto community.

The idea to use a public history lecture series for building these connections came from my own experiences as a first time university lecturer.  After spending 6 years working towards my doctorate, in my relatively tiny little field of nuclear history and my even tinier corner of that particular history, I felt a little disconnected from why it is that history matters.  My dissertation was about the role of activist-oriented physicians and scientists in the American anti-nuclear movement, but while writing it I always had this nagging feeling that maybe my life would have more meaning if I was doing what these activists were doing, rather than writing about them – at what felt like a turtle’s pace.  When I started regularly lecturing to undergraduate students – about the history of medicine and the history of science – I was energized.  It was immediately clear to me why it is that history matters – not only the finessed (and sometimes inaccessible) historical arguments that academic historians love to make, but stories about the past.  For me, active history has come to mean using what happened in the past to inspire people to look outside themselves and their small corner of the world, to develop empathy for their fellow human beings, and to learn from both the good and the bad that has been done in the past.  Since my students over the years seemed to get a lot out of learning about history and because lots of the people in the public places where I wrote most of my thesis seemed interested in the history I was studying, I figured the patrons of the TPL might also enjoy learning more about history from some really cool Toronto historians.  It also helped that the TPL has the largest public library system in Canada and a staff that is totally committed to developing interesting and engaging programming for library patrons across the city!

The theme of the series is Toronto history and will begin with a talk by Stuart Henderson at the Yorkville Branch, where he’ll discuss the history of hippies in the surrounding neighbourhood.  Subsequent talks will be given by the eminent Canadian labour historian, Craig Heron, Active History.ca’s own Jay Young, Susanna Miranda, Jennifer Bonnell, Megan Davies, and David Reville.  The talks cover a wide range of historical subjects, including the history of booze, the Toronto Transit Commission, Portuguese cleaning women, homelessness in the Don Valley, and the impact of deinstitutionalization on Toronto’s Parkdale neighbourhood.  The TPL did its best to have the location of each talk correspond with the topic.

See the full speakers list, with titles, dates, and times below.  If you’re in the Toronto area, I hope you’ll consider coming out to some of the talks.  With the exception of Henderson’s talk, which will take place at 2pm, all of them are scheduled in the evening.  ActiveHistory.ca plans to record and post these lectures on the website so those not able to attend the talks will still be able to hear them later on.  I would also appreciate people posting the program listing far and wide to help with marketing efforts.

Editor’s note: ActiveHistory.ca is happy to provide web support to anyone who wishes to start a History Matters lecture series in their own locale.  Please contact us at info@activehistory.ca if you are interested.

The Toronto Public Library Presents: Programs for the constantly curious…

Connect with Toronto historians at these lively lectures showcasing current research on Toronto’s past and discover some of the surprising ways history matters to everyone in our city today.