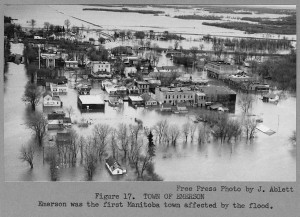 This originally appeared on the Network in Canadian History and Environment [NiCHE] group blog, Nature’s Chroniclers. Shannon Stunden Bower’s given us permission to repost it here.

Southern Manitoba has flooded. Again. Given the large number of notable floods that have occurred in the past few years, this must be a surprise to precisely no one, environmental historian or otherwise. Traversed by both the Red and the Assiniboine, two large prairie rivers that come together at the heart of the city of Winnipeg, the region has a long and well-publicized history of high water.

Some of the earliest stories of the region tell of the devastation wrought by flooding. Indeed, the departure of a substantial number of early settlers is linked to a particularly devastating flood along the Red River. [1] There are also stories about deliberate efforts to ignore the flood risk. The transcontinental railway was built through flood-prone Winnipeg, despite expert advice to select a higher and drier alternate route. [2] Today, there’s a federal penitentiary at Stony Mountain, an area once employed as a refuge in times of high water. [3]

The thing about flooding in Manitoba is that sometimes it doesn’t happen, or doesn’t happen with sufficient severity to attract much notice. Sometimes the flooding is minor for years, even decades, at a time. It can be tempting to think that any period of diminished flooding is indicative of a trend that will certainly continue, effectively extinguishing the risk of severe flooding. So prisons and railways are built in ways that make sense in relation to other considerations. And then any subsequent flood can seem like water out of place, rather than the inevitable consequence of people on a floodplain. So check the ring dykes. Start up the sandbag-making machines. [4] And cue the nervous waiting by evacuated residents.

With the construction of the Red River Floodway in the 1960s, Manitoba’s flood situation was profoundly changed. The floodway is a large channel that diverts floodwaters around Manitoba’s capital city of Winnipeg. Built in wake of the severe flood of 1950 and at a period when the province of Manitoba was becoming increasingly urbanized, the construction of the floodway was an enormous project intended to protect Winnipeggers and safeguard the province’s major economic centre. In the years since it came into use, the floodway has been celebrated as a great success, and for good reason. In 1997, the year of an exceptionally large flood, only thirty homes were flooded within the protected area. Without the floodway, it is estimated this flood would have inundated over two-thirds of Winnipeg, causing roughly $4 billion in damages. [5]

But not everyone is enamored with the floodway. It protects Winnipeg by redirecting the Red River’s water and altering its flow patterns, which can serve to put other places at risk. In 1997, for instance, the operation of the floodway contributed to agricultural inundation in the Rural Municipality of Ritchot and the flooding of 125 homes in the community of Grande Pointe. [6] Since the construction of the floodway, there has emerged in Manitoba’s public discourse a distinction between flooding understood as ‘natural’ and flooding understood as ‘unnatural’, unlikely to have occurred had the floodway not existed or had it been operated differently. The floodway might seem to complicate flooding even as it protects many Winnipeggers, displacing vulnerability and prompting debate about who is to blame for water-logged homes and devastated lives. But from an environmental history perspective, and without losing sight of the real human tragedies that hinge on its operation, the floodway also serves to clarify the character of flooding by drawing our attention anew to the human role in the creation of the flood risk.

During the 1997 Red River flood, controversy arose over what was understood as then-premier Gary Filmon’s comment that people who choose to live in floodplains must bear some financial responsibility for flood damages. [7] Over a decade later, journalists were still referencing these comments. [8] A sympathetic listener might hear in Filmon’s assertion something akin to the environmental historian’s understanding of flooding as people in the way, as opposed to water out of place. But environmental historians are charged with explaining the collective decisions and social processes that, in addition to individual choices, put lives and livelihoods at risk. People live in Winnipeg in part because the railway runs through it. And with a state penal institution now occupying a former flood refuge, the impetus to develop contemporary means of managing flood risk is surely a community as well as an individual responsibility.

Flooding is Manitoba’s perennial challenge. It is a challenge that is as much human as environmental. It forces us to think hard about what sort of society we want to be, in terms of our relationship to our neighbours as much as our relationship to nonhuman nature. And it offers us the opportunity to deal gently and generously with those who, at least in part because of decades of collective decisions and social processes over which they have had little control, find themselves most vulnerable to high water.

Dr. Shannon Stunden Bower is a SSHRC Postdoctoral Fellow at the University of Alberta.

[4] Manitoba has five sandbag-making machines, each of which can produce 35,000 sandbags in an eight-hour period. Province of Manitoba, “New Sandbag Machine Stationed in Brandon By Province,” news release, 3 March 2011.
Available online at
http://news.gov.mb.ca/news/index.html?archive=2011-3-01&item=10954

[8] Dan Lett, “Plain Talk about Life in a Flood Zone” The Winnipeg Free Press, 20 April 20 2009, A5. Available online at http://www.winnipegfreepress.com/opinion/columnists/plain-talk-about-life-in-a-flood-zone-43266197.html?viewAllComments=y