by Crystal Fraser and Mike Commito 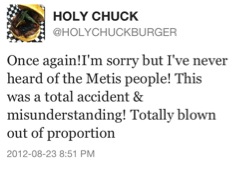 The controversial selection of a hamburger name by a Toronto restaurant had customers and critics raising their eyebrows this past August. Holy Chuck Burgers, located on Yonge Street, specializes in gourmet hamburgers, some of which sport clever titles like “Go Chuck Yourself” and “You Fat Pig.” Recently, the restaurant has come under criticism, not for its indulgent offerings, but because of the names of two of its items: “The Half Breed” and “The Dirty Drunken Half Breed.” It was not long before Twitterverse exploded, slamming Holy Chuck Burgers for its use of racially-charged, insensitive discourse that has had a longstanding history against Canada’s Indigenous peoples. While the criticism was well deserved, the apparent disconnect to Aboriginal issues is unfortunately part of a much larger and longer colonial mentality of indifference.

Like many racial designations in Canada, the term ‘half-breed’ is both complex and problematic. Historically, the designation was used to describe people of ‘mixed’ descent whose lineage originated from intimate relationships between non-Aboriginal newcomers and Aboriginal people. The racial designation of ‘half-breed’ was applied not only to Métis people, but also to other Aboriginals as a way to essentialize and deauthenticate all forms of indigenity. Today, by way of colonial discourse, the Métis are sometimes linked to the historic understanding of ‘half-breed.’ This was demonstrated when Holy Chuck Burgers’ racist food names were viewed as a direct attack on Métis people. But the equation of ‘half breed’ to Métis is intrinsically problematic, since many Indigenous peoples are of ‘mixed’ ancestry but not labelled as such. Nevertheless, Holy Chuck Burgers’ owner explained that the poor selection in burger names originated from the fact that the burger patties consist of a mixture of ground pork and beef. In “The Dirty Drunken Half Breed,” “dirty” refers to the chili that was poured all over the burger and “drunken” denotes the wine that was used in the cooking preparation. When considering Holy Chuck Burgers’ choice of language, it is difficult not to think about racial stereotypes about Aboriginal people that have been historically imposed and, to some extent, continue to be used.

Broadly, the Holy Chuck Burgers debacle is part of the larger context of ignorance and systemic racism towards Canada’s Aboriginal peoples. This was poignantly demonstrated when the restaurateur took to Twitter to plead ignorance of any negative connotations and showed a lack of knowledge of Canada’s Aboriginal peoples. After learning about Holy Chuck’s latest menu items, Ryerson University Law Professor Dr. Pamela Palmater told the Toronto Star that she doubted the sincerity of the restaurant’s claim that it was clueless of the derogatory nature of the term. She also suggested it had failed to adequately investigate the term or include Aboriginal peoples in consumer focus groups. Palmater rightly contends that “racism against Indigenous people in Canada is so ingrained that some in society can’t even identify it when they see it.” Despite the widespread public outcry to remove the racist language from their menu, Holy Chuck Burgers continues to use term the “half-breed.” You can find that here.

Unfortunately, Holy Chuck Burgers’ public relations ordeal has not been the only example of racist sentiments in recent months. This summer also saw none other than Canada’s pop darling, Justin Bieber, come under scrutiny when he told Rolling Stone magazine that “I’m actually part Indian.  I think Inuit or something? I’m enough percent that in Canada I can get free gas.” Bieber’s response displayed a general ignorance of Canada’s Aboriginal peoples and treaty history, while embracing colonial theories about blood quantum. In response, the Museum of Inuit Art offered free admission to his fans in August as a way to learn more about Canada’s Indigenous peoples.

The use of Aboriginal terms or symbols to market food or other products has had a longstanding history in Canada. In his study, The Imaginary Indian: The Image of the Indian in Canadian Culture (2002), Daniel Francis discusses how Aboriginal culture and symbols were appropriated as early as the nineteenth century to help market products as diverse as medicine, food, and oil. Entrepreneurs and companies believed that associating the venerable qualities of Indigenous peoples with their products and using an “Indian” image as a symbol of Canada would increase sales of their Canadian products. 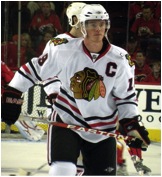 This trend is even more noticeable with sports teams. Many teams in Canada and the United States are named after Indigenous groups in order to link notions of perceived agility, ferocity, and courageousness. Both Canada and the United States continue to boast several sports teams that use racialized language. Despite the fact that the use of these types of logos and mascots perpetuate the misunderstanding of and insensitivity towards Aboriginal peoples, most teams are unwilling to switch to more progressive emblems. For example, the National Hockey League’s Chicago Blackhawks have donned a variation of their logo, pictured left, since 1926.

Many teams have cited financial loss as a reason for their opposition to change. It seems they are more concerned about a loss of revenue associated with brand recognition than a consideration for Aboriginal peoples. Many sports fans continue to accept and even embrace the use of derogatory and racist terms linked to Indigenous peoples.

These issues prompt a consideration of how best to reach and educate popular audiences. It was disconcerting to learn that the ignorant ‘mistakes’ made by Justin Bieber and Holy Chuck Burgers were casually chalked up to indifference. Are we as historians doing enough to educate the public about Indigenous issues? If not, what more can be done and how should we do it? Forums like ActiveHistory.ca are ideal venues, as the pieces we write can be aimed toward broader audiences, perhaps even adolescents in secondary schools. Other media sources have increased the awareness of Aboriginal issues, like CBC’s series, “Eighth Fire,” and the Aboriginal People’s Television Network. And, as confirmed through the example of Holy Chuck Burgers, social media websites, like Twitter and Facebook, have become foundational to the dissemination of knowledge. By dialoguing in these outlets along with our scholarly publications, we can help better educate the public about Aboriginal issues and, in turn, possibly diffuse future incidents before they occur.

Crystal Fraser is a PhD Candidate in History & Classics at the University of Alberta. Her research investigates the many changes Gwich’in people experienced during the twentieth century in Canada’s western arctic. Crystal’s dissertation examines these changes in the contexts of intimacy, labour, and residential schools.

2 thoughts on ““I’ve Never Heard of the Métis People”: The Politics of Naming, Racialization, and the Disregard for Aboriginal Canadians”