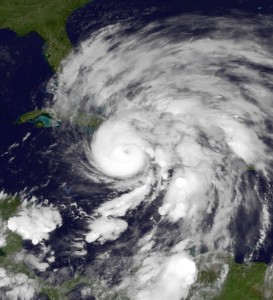 Having spent four years living in Halifax, I’ve experienced my share of Nor’easters. During my MA year, a huge snowstorm forced the university to close on the day scheduled for my first comprehensive exam.  The entire class considered this a divine gift. Having now returned to the east coast after two years in Montreal and two years in Vancouver, I expected a “storm of the century” at some point. As any environmental historian will tell you (whether you ask them or not), climate change has increased the frequency and intensity of these kinds of meteorological events. By late October, the northeast was bracing for something awful.

Superstorm Sandy, which for a brief moment was hilariously named the “frankenstorm,” devastated much of New York City, especially the Staten Island area. The human and financial costs are unimaginable and many residents are still dealing with the fallout. Sandy affected other parts of the northeast, but to varying degrees. In our part of southern Connecticut, power outages, flooding, and highway closures were common. Wandering around New Haven the day after the storm meant climbing over fallen trees, cringing at dented cars or smashed porches, and generally feeling fortunate to have come out relatively unscathed.

The storm had historical significance, and not just because it had been dubbed a storm of the century. New Haven residents came face to face with their civic history when a felled tree on the New Haven Green exposed not only its root system, but also a human skeleton.

First, a brief history: New Haven is the traditional homeland of the Quinnipiac Natives who farmed, fished, and eventually traded with European settlers (first Dutch, then English). In 1637 and 1638, a group of Puritans settled on the Quinnipiac harbour and renamed it New Haven. The Quinnipiac, who had been at war with the Pequot, sold their land in return for protection – of course, these kinds of land deals were often the result of misunderstanding or malfeasance. The newcomers laid out a street grid of nine squares for the town and established a strict religious theocracy. New Haven began its life as a Puritan settlement.

Officials reserved the settlement’s centre square as a commons called the New Haven Green. The Green served many purposes: a marketplace, the site of the first school and prison, a military training ground, and the final resting place for inhabitants during the seventeenth and eighteenth centuries.  The headstones were eventually moved to a new cemetery in the nineteenth century, but the remains were left under the Green, which remains a defining feature of New Haven’s geography. A central part of the city, the Green is independently governed by the Proprietors of Common and Undivided Lands at New Haven, “a self perpetuating group of private individuals” whose functions have changed little since the Green’s establishment in the seventeenth century.  Each member is appointed for life. When one dies, the others choose a successor.

The tree that Sandy knocked over was itself over 100 years old. Known as the Lincoln Oak, townspeople planted it in 1909 to celebrate the 100th anniversary of Lincoln’s birth. Trees have been a defining feature of New Haven’s history.  Called the “Elm City,” New Haven began its love affair with trees at the end of the eighteenth century, when initial clearing and settlement came to a close and residents turned to trees for beautification.  Citizens of New Haven first began planting trees on the Green, and then throughout the city. The Elm tree offered beautiful arched pathways.  American poet and author Nathaniel Parker Willis described New Haven’s elms as “an unhewn cathedral, in whose choirs/ Breezes and storm-winds, and the many birds/ Join’d in the varied anthem.”  Trees became living memorials, like the Franklin Elm that commemorated Benjamin Franklin’s death. Other areas of Connecticut followed New Haven’s lead; Litchfield residents planted 13 Elms in 1779 to represent the rebelling colonies.

Yet the tree that fell on the Green and unearthed the skeleton was an Oak, not an Elm.  There is an obvious reason for that. The focus on arboreal monoculture in the nineteenth century left the region susceptible to disease, and Elm City is now something of a misnomer because Dutch elm disease decimated many of New Haven’s trees in the twentieth century. By the 1960s, most neighbourhoods had lost the beauty and shade of the Elm tree.  This environmental change coincided with the larger struggles facing the city: manufacturing plants closed and left people out of work, suburbs drew people out of the city centre, and New Haven became a depressed city with increasing crime, social problems, and poverty. 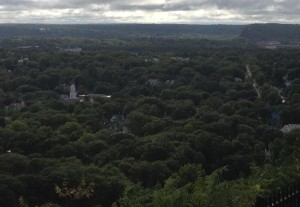 Today, New Haven is still a city of trees. Though hardly “Elm” city, the view from East Rock demonstrates that people here spend their days surrounded by an environment that speaks to the civic aspirations of a past generation.  Our environment has a lot to teach us about the places we live. Sandy uprooted part of the past, exposed the remains of those who lived here, and reminded residents of their shared civic history.

Jeffers Lennox is an assistant professor of history at Wesleyan University.