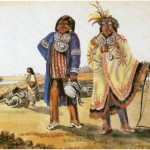 10 thoughts on “Anishnaabeg in the War of 1812: More than Tecumseh and his Indians”