Or, the perils of teaching the history of disease amid global health crises 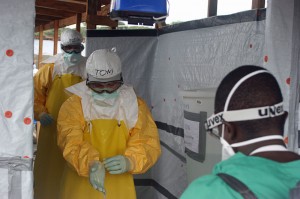 This semester, I’ve had the pleasure of teaching a senior undergrad seminar, focusing on the history of disease from the time of Hippocrates to the present. Every week, in front of twenty-two energetic and curious undergrads, I wholeheartedly attempt to steer conversations away from the ongoing Ebola crisis. This is particularly challenging, as my newshound students are generally well-informed and frequently raise points of discussion that I would happily entertain in a different context.

When my students want to talk about Ebola, I resist the urge to turn our history seminar into a forum for debate about trendy health issues. I find myself thinking: let’s talk about something that matters, and let’s give it a historical context. Rather than focusing our attention on a scourge that is exceedingly unlikely to ever affect your daily lives, let’s talk about some equally harrowing disease that you all think is a relic of the past, but most certainly is not. Let’s talk about tuberculosis, and the place that diseases occupy in the historical record.

I’m generally a strong proponent of students trying to connect their historical reading and research to the world that they see around them, and I think that doing so with the history of medicine and public health is of utmost importance. When the academic term started, I stressed that, by my estimation, the history of disease is the most universal of the lenses through which we can study the past. Disease affects all societies, across time and space. Though the narratives are not universal, there are remarkably consistent patterns in the historically contingent manner in which diseases are defined from a constellation of symptoms; or the way that the understanding of what causes those symptoms has evolved over time, moving from strictly supernatural explanations to scientific evidence of infection or faults in one’s genetic makeup. There are also commonalities when examining the variable terms of access to treatment and care that various individuals or groups have faced. Recurrent too, is the question of why and how certain public health interventions – water treatment, or mass vaccination campaigns, say – are prioritized over others in a given time period.

All of this is to say that I believe wholeheartedly, and with analytical reasoning to back up my evangelizing, that the history of disease is uniquely suited to discuss not only “the past” (that amorphous beast) but also to provide a fairly practical, if presentist, roadmap for how contemporary health concerns are handled by the medical establishment, health authorities, and individuals. The global health priorities of today are directly influenced by the way that the history of disease control played out only a generation prior. Of course, this is true across the vast majority of historical subfields, but the cyclical nature of societies trying to cope with the burden of disease is somehow more visceral than in other instances of “history repeating itself.”

The challenge is that diseases operate differently in our collective imagination than they do in the archive or in scholarship. What is trendy or newsworthy is not necessarily something that has been subjected to rigorous scholarly analysis of the type that I want my students to be engaging with. Ebola, for the most part, is absent from the historiography; since it was first “discovered” in 1976, there have been only sporadic outbreaks, and though the disease is usually fatal, it has received relatively little attention from medical scientists, and virtually none from historians.

The current Ebola outbreak is the most devastating in history, both in terms of the number of lives lost to the disease, and the extent of its spread. From the outset, global health organizations and workers have stressed that local communities are aware of the disease but that infection-control measures have been a challenge to implement. This is especially true because West African burial practices often involve family members washing the body of deceased, which can spread the disease. These factors have raised many questions about how globalization affects the spread of disease, the nature of international humanitarian response to outbreaks, and how to strike a balance between disease control and remaining culturally sensitive and avoiding a descent into (not so) vaguely imperialist debates about the differences between health care in the industrialized world and elsewhere.

How do we account for the panic surrounding Ebola, and the amount of media attention that it has garnered? My hypothesis is that because it’s a disease that has been so understudied, and because it strikes so quickly and so violently — hemorrhagic fever is nothing if not gory and tragic. But if you consider the long-term disease burden by any number of metrics (morbidity, mortality, economic or social cost), it is not a priority on global health agendas, and is unlikely to become so. The reality of the situation is that beyond front-line health care workers who are volunteering in West Africa, there is only an infinitesimal chance that the average North American will contract the disease. Ebola is, and will remain, a disease that affects communities that are living in extreme poverty, without access to modern medical facilities, and which are served by underfunded and overburdened health care workers. It’s not an anomalous disease, in that its morbidity and mortality rate is directly influenced by the social determinants of health. Other diseases that have similar causative or aggravating factors have received far more attention from historians, not to mention from the global health establishment.

Near the end of the term, the seminar focused on tuberculosis, with the readings emphasizing the nineteenth-century context. However, it was always my intention to talk about the late twentieth-century resurgence of a disease that, many people, my students included, assumed was largely eradicated. Indeed, the emergence of multi-drug resistant TB is terrifying; it’s a disease that has no vaccine, and which is extremely costly and difficult to treat. Moreover, the burden of MDR-TB is magnified by the rate of co-infection among HIV-positive patients. Our discussion was quite fruitful, and my students were largely shocked that they hadn’t ever heard of MDR-TB, especially once they started paying attention to global health news bulletins at the beginning of the Ebola crisis. At the end of the seminar, one student posed a rhetorical question to his classmates, asking why the word TB made him immediately think about a nineteenth-century “wasting disease,” and consumptive ladies on fainting couches, rather than a pressing global health issue.

This relegation of certain diseases (TB, polio, measles, mumps, rubella) to our historical imagination is somewhat irresponsible, if we expect to actively engage with contemporary debates while allowing our knowledge of the past to assist us in shaping our perspectives and (hopefully) influencing policymakers. I’ve been able to historicize the response to Ebola for my students by making connections to other diseases that have rocked the fragile health systems of postcolonial states, or that have presented similar challenges to global health networks. While Ebola is in the spotlight for now, I want to make sure my class will be even more attuned to the manner in which “old diseases” are gaining new ground, and to what our historical experience with diseases that enjoyed a far greater geographic reach even before the era of mega-globalization can teach us about the way that they might affect societies and individuals in the future.

One thought on “Let’s talk about something other than Ebola”