But remember that words are signals, counters. They are not immortal. And it can happen – to use an image you’ll understand – it can happen that a civilization can be imprisoned in a linguistic contour which no longer matches the landscape…of fact. Brian Friel, Translations 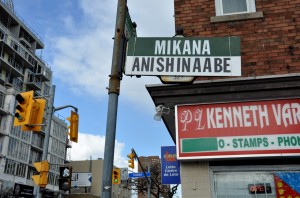 Brian Friel’s play Translations takes place in 1833, in the Irish-speaking village of Baile Beag. Translations is set during the early nineteenth century, a time when the Great Famine loomed over Baile Beag. The British were starting to survey and map Ireland, a process that followed the amalgamation of Ireland and the United Kingdom in 1801. Part of Britain’s renaming and remapping of Ireland was the anglicization of Gaelic place names. The main characters in Translations struggle with the erasure of traditional place names. In the play, the arrival of British cartographers signals the disappearance of Gaelic place names from the landscape – but not from the memories of confused villagers, who dont’t speak a word of English. Suddenly, Baile Beag “small town” becomes Ballybeg, Druim Dubh “black shoulder” turns into Dromduff, and Poll na gCaorach “hole of the sheep” is changed to Pollkerry. The British close all the hedge schools in Baile Beag and replace them with “national schools” where students are taught English. Translations explores the historical relationship between place, language, and power. I couldn’t help but notice a connection between the themes of cultural identity, language, and colonialism in nineteenth-century Ireland, and my own research on place names and colonialism here in Canada.

For Indigenous peoples, place names act as mnemonic devices, embodying histories, spiritual and environmental knowledge, and traditional teachings. Place names also serve as boundary markers between home and the world of outsiders. As Dominique Tungilik recounts, for the Inuit, “the names of places, of camps, and lakes, are all important to us; for that is the way we travel – with names.” Knowing one’s way around the land and bodies of water could mean the difference between life and death. Place names convey an array of information to the Inuit, from local knowledge about topographical features, to the presence of seasonal resources; sometimes they record information about the history of the landscape itself.

For the Western Apache people who live in present-day Arizona, place names prompt individuals to recall moral teachings. These lessons, or ‘ways of being’, are embodied in stories that “comment on the moral shortcomings of wayward individuals.” For instance, a place called “Trail Goes Down Between Two Hills” brings to mind the story of Old Man Owl, a fool who relentlessly and unsuccessfully pursued two beautiful women. Because he did not chose one woman, Old Man Owl was doomed to wander aimlessly, climbing back and forth between the two hills as the women taunted him from atop. When a person travels to Trail Goes Down Between Two Hills, they are reminded of Old Man Owl’s mistakes. Moral teachings and Apache wisdom reside within the physical landscape, brought to life through the names of places.[1]

Places are never static and are constantly in a state of flux; they’re always a product of social connections linking them to the outside world (this could be in the form of trading connections, colonialism, or migrations, for example). With colonialism, however, these interconnections between the outside world (world of settlers) and the local (Indigenous world) were unequal, and Indigenous ways of interacting with, knowing, and naming the land, were sometimes lost or made invisible. We know places through their histories, how we tell these histories, and especially through the voice(s) we privilege in telling us about their pasts.[2] Words and place names are “not immortal,” as Friel writes, but it’s easy for their meaning to be lost when “the landscape of fact” (colonialism) disconnects them from the past. 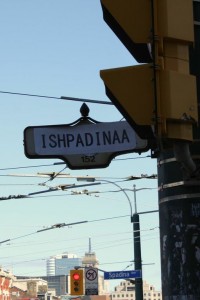 Today, a lot of the place names we in use in Canada are based on French or English ways of naming; these names often reflect what was important to settlers. Europeans named places after their monarchs or saints; they reused the surnames of prominent families or the names of meaningful places back in Europe; they sometimes created French or English versions of Indigenous place names; or they used descriptive names to emphasize topographical features. The place where I live, Toronto, was home to multiple Indigenous groups (Huron-Wendat, Haudenosaunee, and Anishinaabe/Mississauga peoples) prior to the arrival of settlers in the sixteenth century. Indigenous peoples have occupied present-day Toronto,  since the last Ice Age, around 11, 000 years ago.

Some great work is being undertaken to reclaim Indigenous place names across Toronto. A lot of Toronto place names owe their origins to Indigenous peoples. For instance, Spadina, a major street in Toronto, is an anglicized version of the Anishinaabemowen word ishpadinaa, meaning “place on a hill.” Today, Spadina runs north-south and begins close to the shoreline of Lake Ontario, and ends at a natural escarpment. This escarpment, which is known today as Davenport Hill, marks the shoreline of an ancient glacial lake called Lake Iroquois. Along the base of the escarpment lies Davenport Road, which follows the original footpath used by Indigenous peoples to travel quickly across the area. Lake Ontario is named after a Wyandot or Haudenosaunee word for “great lake” or “beautiful lake.” Etobicoke is derived from an Anishinaabemowen word for “place of black Alder” and Mississauga from the word Masesaugee, meaning “eagle clan.”[3] 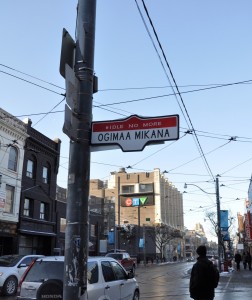 These place names and their histories became invisible following the arrival of setters, who had their own uses for the land. The Ogimaa Mikana Project restores Anishinaabemowen place names to the streets, roads, and trails of Gichi Kiiwenging (Toronto). This project reintroduces Anishinaabe history to Toronto by replacing English names with their original Anishinaabemowen names, a process that subverts the current landscape. Take for example Queen Street, a place known for its boutiques, restaurants, and art galleries. Queen Street was renamed Ogimaa Mikana or “Leader’s Trail.” Ogimaa Mikana was chosen as a “tribute to all the strong women leaders of the Idle No More movement,” a process that according to a recent article in Spacing, literally “dethrones the cross-Atlantic monarchy.” First Story Toronto is an-going project based out of the Native Canadian Centre of Toronto that researches, preserves, and builds awareness about Toronto’s Indigenous history. First Story created a digital map-based smartphone application that explores Toronto’s Indigenous history, offering a counter-Indigenous narrative of places across the city (the app is available for free on iOS or Android).

Like the villagers of Baile Beag, Indigenous peoples across North America witnessed the surveying, mapping, and renaming of their homeland. Connections to their land, their pasts, and traditional knowledge disappeared from settler maps, words, and knowledge systems. The “linguistic contours” through which Indigenous peoples gave meaning to places was typically not included within the language and place names of settlers. Place names are powerful; they embody histories and can ‘claim’ ownership over the spaces we inhabit. Many of us go about our daily lives taking for granted the names we use to locate ourselves. Or perhaps we feel alienated from the names we see around us due to erasures, disruptions in our pasts, or relocations. It’s important to think about the histories of place names, to appreciate where they come from, what they mean, and what they can teach us about our environment.

Kaleigh Bradley is a PhD Candidate in History at York University and a co-editor at ActiveHistory.ca. Her research explores the relationship between environment, memory, and human history in NunatuKavut, Labrador.

[1] Anthropologist Keith Basso was one of the first to examine the significance of place names among Indigenous peoples, most relevant is Wisdom Sits in Places: Language Among the Western Apache (Albuquerque: University of New Mexico Press, 1996), see Valerie Alia, Names and Nunavut: Culture and Identity in the Inuit Homeland (New York: Berghahn Books, 2009), and Dominique Tungilik, quoted from John Bennett and Susan Rowley eds., Uqalurait: An Oral History of Nunavut (Montreal and Kingston: McGill-Queen’s University Press, 2004), 113.

[2] Here, I am drawing on the work of geographer Doreen Massey, who argues that places are hybrid and always in a state of becoming. See Doreen Massey, “Places and Their Pasts”, History Workshop Journal no 39 (Spring 1995), 186.

[3] See the work of Victoria Freeman, “Indigenous Hauntings in Settler-Colonial Spaces: The Activism of Indigenous Ancestors in the City of Toronto” in Phantom Past, Indigenous Prescence: Native Ghosts in North American Culture and History, ed. by Colleen E. Boyd and Coll Thrush (Lincoln: University of Nebraska Press, 2011), Jon Johnson’s research on the environmental history of Toronto, and the work of First Story Toronto.