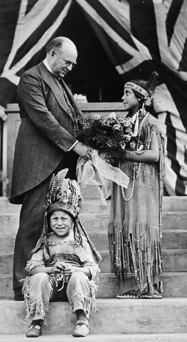 This essay addresses sensitive material that some readers might find disturbing. The Indian Residential Survivors Society provides support for survivors and their families.” We could like the second sentence to this website: http://irsss.ca/do-you-need-help/

A growing chorus is calling for a statue to honour R. B. Bennett on Parliament Hill. An eight-foot high sculpture has already been made and reportedly held in storage in Ottawa. It has been suggested Bennett be placed facing east, towards his childhood home of New Brunswick. The renewed interest in Bennett’s place in Canadian history reached a crescendo just as the Truth and Reconciliation Commission of Canada was winding down its important work. This opportune moment invites us to ponder the 11th prime minister’s role in the “national crime” that was the residential school system.[1]  Bennett’s response to reports of the mass flogging of children at a residential school in Nova Scotia is a good place to start.

In the spring of 1934, Indigenous leaders called for the removal of the Shubenacadie Residential School Principal, the Roman Catholic Reverend Jeremiah Mackey, after children recounted savage details of being beaten on his orders. Press accounts told how the priest rounded up nineteen boys after money went missing. Among them, a 12-year-old child recovering from having a kidney removed. The priest ordered the children’s heads shaved. He demanded the children strip to their waists and hold up their arms above their heads. He enlisted the school’s carpenter-engineer to fashion a seven-thronged strap cut from a leather harness and to soak it in vinegar overnight. The beatings took place over several days as the children were left to starve. So severe were the floggings, permanent scars remained from deep lacerations.[2]

News of the floggings came with a general election on the horizon. The Catholic vote was important to national electoral success. With the priest’s removal for stripping and whipping schoolboys, the hope was lost. Bennett no doubt foresaw the future headline: “anti-Conservative wave … topple[s] over [the] Tories like ninepins through [the] Eastern provinces.”[3] Regardless of the political fallout, justice and human decency demanded the obvious. An investigation of some sort was required. If the press accounts were true (which they proved to be), one would also assume that the priest would simply have to go. After all, Bennett was said to have “had no charity for real breaches of trust.”[4] That the story did not unfold this way is one of Canada’s darkest moments.

Bennett struck a Royal Commission of Inquiry into the Alleged Flogging of Indian Pupils with a promise to act upon its recommendations.[5] However, his choice of lawyer Louis Arthur Audette as the commission’s chair foretold the result. The New York Times summed it up: “Whipping Indian Boys Upheld in Canada: Commissioner Contends School Punishment was Just and Richly Deserved.”[6] Bennett would have known that Audette had an established track record of racist attitudes and actions towards Indigenous peoples. In 1916, Audette chaired the Royal Commission on Pelagic Sealing. He was tasked to ascertain compensation for those “damnified by reason of the [1911] Pelagic Sealing Treaty.” Ignoring sealing’s importance to Indigenous peoples’ subsistence, Audette reduced compensation to Indigenous claimants by 50 percent. He further reasoned that “[the Indian’s] superstitious nature made him very unwilling to continue the dangerous life of the sealer.”[7] Audette expressed “horror upon discovering that an Aboriginal witness … suffering from tuberculosis [was] work[ing] for a local cannery [that] prepar[ed] food for non-Native consumption.” Audette prohibited the man “from touching the Bible” when he was sworn in.[8] That same year, as chair of an investigation into a land dispute in Sydney, Nova Scotia, Audette sought to remove the Mi’kmaq from their homes at the King’s Road Reserve.[9] “No one cares to live in the immediate vicinity of the Indians,” he said.[10]

Were these matters the subject of casual conversations at the exclusive and, at that time, thoroughly White, Christian, and male Rideau Club across the street from Parliament Hill? We will never know. However, Audette was a member and Bennett was said to be there daily between 1930 and 1935. Regardless, Bennett had made a clear decision by selecting someone with Audette’s background to investigate the floggings.[11]

Audette had a broad investigative mandate but chose to focus on one question: Were the floggings “reasonable under the circumstances,” as allowed under the Criminal Code? His answer involved bizarre moral and legal contortions heavily imbued with his well-established racist sentiments. He mused about the fortitude of different skin types and how so-called Indians’ minds were only “just emerging from barbarism.” Audette accepted as normal almost all of the egregious facts. He never even flinched at the beating of the child recovering from surgery. “There is no harm in punishment by the infliction of physical pain,” he said. “All human governments rest in the last resort upon physical pai[n] and it is mere cant to pretend that it does not.” “[T]he strap, the cane[,] and the birch are used [in England and upon] the big men who moulded the destiny of the British nation.” Why then, he asked, can’t they be used on children at residential schools?[12] Rather than condemning the priest, Audette praised him for maintaining discipline.

Bennett accepted Audette’s savage ruling, sent the children back into the hands of their abusers, and stood behind what remained the only official national statement on disciplinary procedures at the schools until 1953.[13] Bennett’s central role in creating this unspeakable violence is a little-known fact. Why? The answer is simple. Decades ago Bennett sympathizers attempted to destroy records that they felt put the Prime Minister in poor light, hence burying this grim chapter in Canada’s history.[14] Those calling for a memorial to honour Bennett are unwittingly counting themselves among these historical revisionists. Or, worse, agreeing with the unsubstantiated claim that such abject violence was considered acceptable at the time. It was not. A study prepared in 1928 for the Secretary of the Interior by the Brookings Institute, argued, among other things, that “the Indians should be protected from” employees using such harsh disciplinarian techniques. [15] This is just one example of how Bennett’s prime ministerial record is not heroic. It is unfortunately quite barbaric.

So what might be done with the sculpture currently sitting in storage? Well, it might yet be put to use. Perhaps laying it face down to symbolize his and the Canadian government’s ignominious role in the en masse violence against Indigenous children. Perhaps this is what is needed to awaken from slumber those who have yet to recognize that Canada’s history includes genocide. Maybe when that happens, we can roll Bennett over on his back. One thing is certain. Bennett’s contributions to the cause of truth and reconciliation will never stand on two legs. Thousands of children lost their lives at the residential schools. Bennett was an active participant in the system’s violence. Surely we will not dishonour the children who lost their lives and those who survived by fashioning feel-good commemorations that deny the truth of Canada’s dark past.

Karen Bridget Murray is an associate professor of political science at York University.

[1] Milloy, John. A National Crime: The Canadian Government and the Residential School System – 1879 to 1986. Winnipeg: University of Winnipeg Press, 1999.

[5] Canada, Report of the Royal Commission of Inquiry, Under Part II of the Inquiries Act, to Investigate and Report the Circumstances in Connection with the Alleged Flogging of Indian Pupils Recently at Shubenacadie Residential School (Louis Arthur Audettte, Commissioner), September 1934.

One thought on “Facing Down R.B. Bennett”