Syrians have a long history in Canada. Paul Anka is perhaps the best known Canadian of Syrian ancestry. But there were others; many of whom we must consider “Old Stock Canadians.” Somewhat less well known, for example, but still very popular in his day, was “Canada’s King of the Fiddle,” Ameen “King” Ganam, born in Swift Current in 1914. He entertained from a young age in Saskatchewan and then in Edmonton starting in the 1940s, later moving to Toronto where he had his own radio program the “King Ganam Show.” His band the Sons of the West included Tommy Hunter. Ganam was one of the first inductees into the Canadian Country Music Hall of Fame. A 1954 article about him began “With his dark good looks, flashing brown eyes and Syrian background, King Ganam looks as if he’d be most at home dashing across the desert on an Arabian steed. But says he, the only plains he has ever dashed across are those in Southern Saskatchewan where he was born and grew up.”[1]

The southern Saskatchewan plains where Ganam was born, and that he dashed across, were home to many Arab settlers. Most referred to themselves and were known as Syrians, meaning that they came from an area encompassing present-day Syria and Lebanon. Arab settlers from Syria/Lebanon arrived in Western Canada starting well over one hundred years ago. They settled throughout the West but there was a significant cluster of Arabs in southern Saskatchewan on arid marginal land in the heart of Captain John Palliser’s infamous triangle that he identified as an extension of the Great American Desert. Most were from eastern Lebanon and they included Muslims and Christians.[2] They were generally single men, arriving on the Canadian prairies through the United States.[3] Others arrived as families. Some filed on homesteads of 160 acres, and “proved up,” receiving title to their land and persisted for decades. Others, like thousands of would-be homesteaders, deserted or abandoned their land. Some purchased land that they farmed. Aside from farming, Arab settlers operated general stores, bakeries and cafes in towns throughout the West and some were traveling merchants, visiting the isolated farms on foot or by horse and wagon in summer, and sleigh in winter.

One example is Saleh “Charlie” and Shrefey Gader and family.[4] The couple met and married in the U.S. and they went back to Syria briefly before arriving in Saskatchewan in 1912, purchasing land near Pambrun. They farmed and Charlie was a traveling salesperson of goods while also taking on any available jobs such as picking rocks. They bought a general store in McMahon in 1924 where Charlie initiated the establishment of a school and was a trustee. Selling the store they bought land near McMahon in 1927 and here they survived the Depression and raised their twelve children, one dying in infancy. They purchased more land and machinery over the years and had a large operation by the time the couple retired to Swift Current in 1951. Their daughter remembered that their home was “open to all visitors and everyone was made welcome, no matter who it was, strangers included. There were many times when people stayed for days…:” 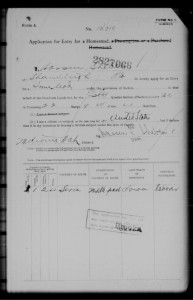 Hassan Shaben’s application for entry for a homestead 1912. He “proved up” on his land, earning his title, as did his brothers Sam and Abdul, all in the Shandleigh district of Alberta.

The Salloums also farmed in southern Saskatchewan. One of my favourite books, Arab Cooking on a Saskatchewan Homestead by Habeeb Salloum tells the story of his parents and family.[5] In 1923 Salloum’s father, a peasant farmer, came from the “far Syrian desert with sands blowing, to the Saskatchewan desert of wind and snow.” Seeking a more tranquil life in the midst of the turmoil of the French occupation of Syria, he left his young family and what was then the French Mandate of Syria and Lebanon for Saskatchewan where he had relatives. His family followed in 1927 to a homestead north of Val Marie. While they had a good crop in 1928, this venture could not have begun at a more catastrophic time as after 1929 there were no grain crops for years on this parched land, and the soil “blew back and forth like the deserts of Arabia.” But they had experience with this harsh terrain; his parents were accustomed to growing chickpeas and lentils which had adapted over centuries to the desert climate, and with these dishes, as well as yogurt, the Salloums survived the Depression in the middle of the dustbowl. These “pulse” crops have been found to flourish in the dry, fertile soil of Saskatchewan. Canada is now one of the major exporting countries of chickpeas and lentils, crops first introduced to the prairies by Arab settlers. Regina has been described as the “next hummus capital.”[6]

Arabs settled throughout Western Canada. Michael and Shafia (Malouf) Ateah were from Mount Lebanon, Syria. They met and married in Winnipeg and settled first on the Fort Alexander Reserve.[7] Michael traded with the Anishinabe for furs, fish and berries. The children attended the residential school at Fort Alexander. Another Syrian settler was nearby, a young man named Khalel, who traded at Little Black River. In 1912 Michael filed on a homestead on what was then the lonely peninsula of Victoria Beach on Lake Winnipeg where they raised a family of eight children. Khalel filed on a homestead beside them. Shafia cooked delectable Arab dishes and she grew vegetables from her homeland including large quantities of beans that she sold. She preserved food using methods used for generations in Syria, but also learned from local Anishinabe women how to smoke gold eye. The Ateahs helped to make “VB” the popular resort that it remains to this day. Daughter Laela Ateah-Lester published Cedars of Lebanon, a fascinating history of this family in Syria and Manitoba.

Near North Battleford Saskatchewan there was a colony of settlers from Assyria founded in 1902 by 36 men, women and children. They were joined by 40 more in 1906, with others arriving after World War I.[8] They were from the Urmia region of northwest Persia (Iran). Isaac Adams and Assyrian medical missionary was the organizer of this venture. Farming in the colony was a struggle and by 1914 many had moved into “Chisholm Town” in North Battleford. They ran small businesses such as grocery stores, a tannery, a tailor shop, and a pool room.

There were also settlers from Syria in Alberta. Hassan Shaben homesteaded north of Brooks Alberta, having arrived in Canada after some years of working in Iowa.[9] On his application for a homestead the dominion lands agent noted his country of birth as “Seria,” the “middle part.”[10] Hassan’s brother Abdul homesteaded nearby. Another brother Sam and brother-in-law Mike tried homesteading and then went into business in Endiang, Alberta, establishing a grocery store and a poolroom. A widowed sister Amina and her daughter also eventually made it to Alberta but their ship was re-routed to Mexico and they were stranded for four years.[11] Sam and Abdul retrieved their sister and niece in Laredo, Texas in 1915.

The town of Lac la Biche Alberta recently celebrated 100 years of Lebanese settlement there, where a mosque was built in 1958. The Al Rashid Mosque, Canada’s first, was opened in Edmonton in 1938 and is today at Fort Edmonton Park and still in use.

Arab settlers encountered obstacles and hardships aside from drought, frost, hail and insects. Arabs in North America faced a heritage of fabricated mythologies and crude caricatures. Some of these are to be found in James S. Woodsworth’s Strangers Within Our Gates or Coming Canadians in his chapter on “Levantine Races.” Woodsworth lamented the arrival of “six or seven thousand” Syrians in Canada.[12]

Salloum remembered Saskatchewan as a “land where we tasted bitterness.”[13] He had memories of kind teachers in the tiny school at Minot, but as a boy he was “burdened with a feeling of imperfection.” In his poem “The Prairie Rubaiyat” Salloum wrote “Cruel were my schoolmates, taunting me ‘indfidel.’ And ‘foreigner’ who came in their land to dwell.”[14] He was anxious to leave the parched prairies of blowing dust and piercing sand, and was pleased to have the opportunity during World War II to join the Air Force. His brother joined the Navy. Salloum never returned to live on the prairies, but his parents retired to Swift Current, and they “always praised Saskatchewan, this part of Canada which was their adopted land.” They thought of Saskatchewan as a “paradise.”[15]

Habeeb Salloum concluded his book with “The saga of the Arab immigrants is truly the story of Canada.” He feared they were being forgotten as those with Arab heritage sought to assimilate. He hoped “fellow Canadians and others, after reading our family’s saga will feel that Arab Canadians have contributed to Canada’s history.”[16]

I share the hope that this history will not be forgotten and the belief that the saga of Arab immigrants is truly the story of Canada. If such a category as “old stock Canadians” exists, (in the words of our prime minister in the debate on September 17th) then Syrians surely belong there.