In the third part of this four part series on solar energy we will continue to examine an integral part of energy history: computer simulation. Faced with the combined uncertainty of a unstable oil market and a desire for new solar technologies, the government searched for and a means of managing these risks. In this situation, computer models provided policy makers with a foundation, albeit a shaky one, for their decisions. 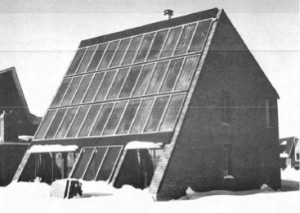 The Meadowvale Solar Home in the winter of 1977. This experimental home was built to test the application of solar heating technology in Canada. While a success, it provided heat far less efficiently than the WATSUN model calculated and experienced many more technical problems than the model projected.
Picture Provided by: B. E. Sibbett and H. Jung, Performance of the Meadowvale Solar System (Ottawa: Division of Building Research, National Research Council, 1981)

Two engineers, K.G.T Hollands and J.F. Orgill from the University of Waterloo devised the computer simulations that determined Canada’s plans. The work of these two engineers highlights the diverse support that solar technology and environmentalists’ calls for alternative development received in the 1970s. The two were members of the Canadian Solar Energy Society, which formed in 1975 to support solar development. Intrigued by solar technology’s bright future, this group of scientists, engineers, and business people studied the technology, shared information, and generated interest in solar and other renewables. The society had a substantial impact on solar development. It counted a number of ministers among its supporters and attracted a stream of government analysts and advisors to its annual meetings and workshops throughout the 1970s.

Orgill and Hollands specialized in solar heating technology. Hollands, for instance, developed honeycomb insulation for solar collectors to reduce heat loss in Canada’s cold winters. The two combined this interest with backgrounds in electrical engineering and computer programing. Thanks to this skillset, they were hired to develop forecasting models for the National Research Council and the Department of Energy, Mines, and Resources. WATSUN, as they called their computer model, simulated the development of solar heating by analyzing solar technology, weather patterns, and the national price of oil over the next two decades. By simulating these factors WATSUN promised to help policy-makers decide if solar technology had commercial potential in Canada.

Orgill and Hollands worked to make WATSUN as detailed and accurate as possible. Their algorithms even calculated the hourly amounts of solar “fuel” in cities across Canada. They also took into account typical configurations of solar collectors as well as different types of residential and commercial buildings solar heating systems might need to heat. In short, WATSUN seemed to present an accurate picture of solar technology and its potential in Canada.

Orgill and Hollands’ vision was an optimistic one. Their model used the Department of Energy, Mines, and Resources forecasts of scarcity and rising prices to project great opportunities for solar heating. The model further suggested that solar technology itself had the potential to improve rapidly if large investments were made. According to WATSUN, solar heating technology would likely experience a massive growth spurt and corresponding technical improvements in the immediate future. WATSUN quantified these forecast innovations as a 55% decrease in solar heating costs as the technology progressed and commercialisation brought economies of scale.

This perceived comprehensiveness and precision made WATSUN the most important source of information about solar energy. Internal memos at the Department of Energy, Mines, and Resources show it overshadowed other work with solar technology including experimental projects. Decision papers, for example, did not mention the National Research Council’s Meadowvale solar home which experienced significant problems, but they did cite WATSUN. As a result, the computer model’s projected vision of solar development framed the government’s decisions.

The Department of Energy, Mines, and Resources largely accepted WATSUN’s conclusions. As one Department memo put it:

The performance and cost-effectiveness of new technologies usually improve as they mature; solar heating is not likely to be an exception to this rule. …the dilemma, of course, is that the technology will not mature without a market and the market will not develop without a mature technology. A stimulus is required to get us off this dilemma if solar heating is to realize its potential in the next few decades.[1]

In the government’s view solar heating would probably succeed if funding could be provided to launch its commercialization.

In the summer of 1978 the federal government decided to give solar that opportunity. On July 4, Alistair Gillespie, the minister of Energy, Mines, and Resources, announced a set of programs designed to jumpstart solar and biofuel industries in Canada. All together these programs promised $2.1 billion (adjusted for inflation) in federal, provincial and private funds over five years. Federal solar programs provided $440 million in funding for the purchase of solar collectors, to assist new manufacturers, and as incentives for innovation. Designed to give solar a market that could generate WATSUN’s projected rapid improvement, these funds launched a brief boom in solar.

When confronted by uncertainty, the government remained committed to the technical forecast intensive approach they had relied upon to make energy policy in the past. The long term consequences of any decisions they made left them little choice. That said, computer simulations remained a tricky tool to use. When trusted too much forecasts could displace reality and become exercises in future making. Alternatively, they could raise expectations and set up their subjects – solar energy – for failure. WATSUN would do a little of both.

Hank Trim is a SSHRC postdoctoral fellow at the University of California, Santa Barbara. This is the third in a four part monthly series on the rise and fall of solar energy in the 1970s and 1980s. Click here to read parts one and two.