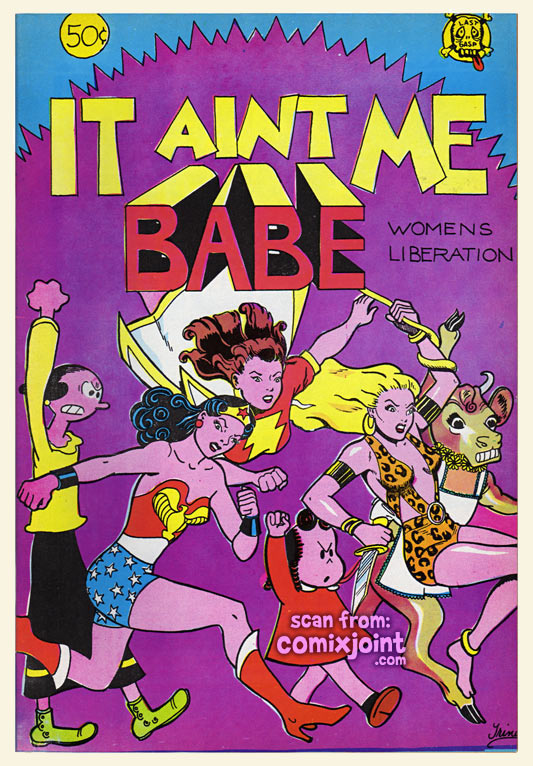 It Ain’t Me Babe, the first comic book produced entirely by women (1970).

Historically, the comics industry has been male dominated, with male writers and male illustrators (working for companies owned by men) depicting women in stereotypically demeaning and derogatory ways. This is especially true of Golden Age comics in the 1940s and 1950s, with the possible exception of Wonder Woman in the United States and Nelvana of the Northern Lights in Canada.

By the 1970s, however, things had started to change. As second wave feminism emerged, writers in the U.S. like Sharon Rudahl and publications like Wimmen’s Comix and It Ain’t Me Babe challenged the exclusionary nature of the industry and created space for comics for women, by women, and about women. In Canada, a feminist group known as the Corrective Collective released their own project, a historical comic book: She Named It Canada Because That’s What It Was Called. When it was first published in 1971, She Named It Canada provided a critical – and quite radical – alternative feminist perspective on the establishment and development of colonial Canada. At the time, the field of social history was just emerging, and so this people’s history would have been a significant departure from the dominant historical narratives most Canadians could access. Sadly, She Named It Canada is now out of print and so few people are aware of its existence. 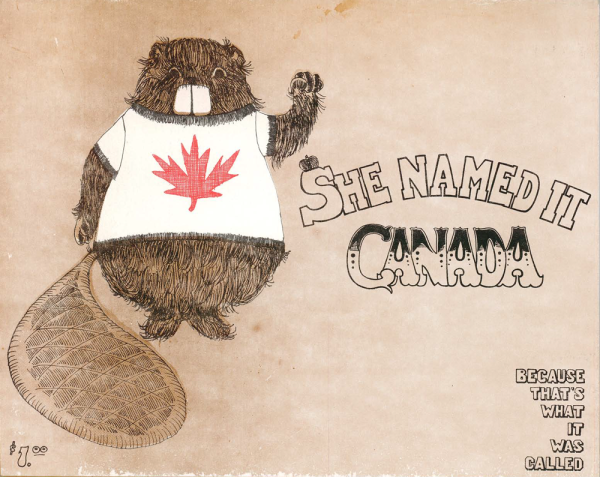 In an effort to popularize this important early “graphic herstory,” the Graphic History Collective (GHC) has, in consultation with Corrective Collective members, digitized She Named It Canada and made it available to read for free on our website. By showcasing the comic book, we hope to highlight the important contributions of feminists to the radical comics tradition in Canada.

GHC members first came across She Named It Canada a few years ago. We were struck by how humorous and politically sharp the comic book remained more than forty years after its initial publication. As an activist comics collective ourselves, we wanted to know more about how and why the project was completed. GHC members Robin Folvik and Julia Smith had a particular interest in the project, as they both research and write about feminist activism in Vancouver. After reaching out to our networks and doing some internet research, we managed to connect with several Corrective Collective members. Interestingly, some of them are currently working to collect and digitize their own archival material as well as that related to another important second wave feminist organization, the Vancouver Women’s Caucus. For us, discussing art, history, and politics with folks that forty years ago did the work that we are trying to do now – make progressive history comics – has been a wonderful and rewarding experience of intergenerational solidarity and exchange.

To help readers learn more about She Named It Canada and the Corrective Collective, we have included two special features on our website alongside the comic. The first is an interview with Corrective Collective member Cathy Walker. According to Walker, the collective emerged out of the Vancouver Women’s Caucus in the early 1970s. Inspired by The People’s History of Cuba, the group decided to create a people’s history of Canada to educate their American sisters ahead of a big international conference that brought women from Vietnam and the U.S. together in Vancouver to talk about peace and women’s issues.

We have also included an essay by historian Joan Sangster that situates She Named It Canada within the broader history of second wave feminist publishing in Canada. Sangster points out that the Corrective Collective is perhaps better known for their book Never Done: Three Centuries of Women’s Work in Canada, which was published later. In her research on the Corrective Collective, Sangster learned that She Named It Canada was produced rather quickly, a fact corroborated by Cathy Walker and other members. The group broke the research and writing work into separate sections and then Colette French illustrated the 80-page comic book. It is an impressive feat for a DIY outfit of feminist activists in the 1970s.

In the four and a half decades since the Corrective Collective published She Named It Canada, the comics industry has undergone significant change. Men still predominate, however, women are increasingly producing more comics. In recent years, women have produced a number of progressive graphic histories on a variety of activists, from Nellie McClung and Ginger Goodwin to Rosa Luxembourg and Emma Goldman. The Corrective Collective is an important part of that history. The GHC hopes that free online access to She Named It Canada and the accompanying interview and essay will shed further light on second wave feminism and the tradition of radical comics in Canada.