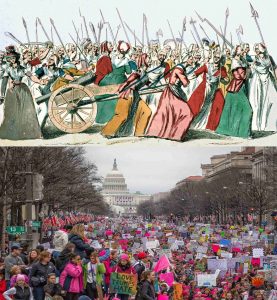 Women’s Marches Then and Now

Over the past couple of weeks people around the world have taken to the streets in order to call politicians, business leaders, and civil servants to account. Though similar, no one event was the same. The Women’s March was carefully planned over two months between the US election and Inauguration Day; its purpose was to give voice to the open misogyny expressed by Republicans during the campaign. A week later tens of thousands flooded US airports to support travelers detained due to the idiosyncratic and illegal presidential travel ban targeting Muslims.[1] Two days after that, here in Canada, we mourned the killing of Azzedine Soufiane, Mamaou Tanou Barry, Khaled Belkacemi, Aboubaker Thabti, Ibrahima Barry and Abdelkrim Hassane as they left a Quebec City mosque following prayers. Again, thousands took to the streets across the country voicing concerns over the rise of hate speech and its enablers.

As I participated in, and continue to think about the meaning of, these movements, my attention often turns to the historiography of the crowd. In 1959, Georges Rudé published The Crowd in the French Revolution. A ground-breaking book at the time, he began with a historiographical intervention: historians had seldom studied the history of the crowd.

“It has… long been recognized,” Rudé wrote in his introduction, “that the Revolution was not only a political, but a profound social upheaval, to the course and outcome of which masses of ordinary Frenchmen, both in the towns and countryside, contributed… But how were the crowds composed that stormed the Bastille in July 1789, marched to Versailles to fetch the king and queen to the capital in October, that overthrew the monarchy in August 1792, or silently witnessed the downfall of Robespierre on 9 Thermidor? Who led them or influenced them? What were the motives that prompted them? What was the particular significance and outcome of their intervention?”

These are important questions. When shifted to the context of 2017 – and the large-scale protest movements of the Arab Spring, Occupy Wall Street, #IdleNoMore and Black Lives Matter – I am not sure that we have clear answers. Are the events we’ve seen over the past couple of weeks one-off protests: reactions to a vulgar president, poorly thought out public policy, a mourning following a tragic event; or are they more symptomatic of broader malaise with the structures of western democracy. In just two weeks, in Canada at least, the arguments of the crowd shifted from the destabilizing threat of rapidly shifting US policies, to broad statements about the meaning of inclusion in Canadian society, towards a focus during last week’s National Day of Action against Islamophobia on Canada’s own governmental failure to yet repeal the Zero Tolerance for Barbaric Cultural Practices Act and Bill C-51 (the Anti-Terrorism Act). What exactly have these crowds been about? What, if anything aside from timing, unites them?

Each of these events builds on a global culture of protest. To the list above we might also add – though ensuring not to conflate – the upsurge in right wing, nationalist populism seen in the US, UK, India, Poland and the Philippines. To differing capacities and degrees, each movement expresses profound dissatisfaction with the status quo, perceived (and often real) deep and violent histories of oppression, and a sense of distance and isolation from political and economic power. In today’s post I would like to suggest that in their size, independence of explicit political influence, and overwhelmingly peaceful nature, it is perhaps worthwhile looking back to the history of the crowd and popular protest to understand the events of the past month; asking questions about whether they are or are not indicative of broader trends. 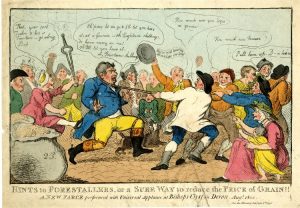 In 1971, British historian E.P. Thompson put forward an argument aligning crowd action during the eighteenth century with what he called the ‘moral economy.’ For him, periodic uprisings of the poor over the price of bread was not so much about people starving as it was the upending of perceived customs and traditions. At the end of the eighteenth century, according to Thompson, the bread riot became indicative of broader social and economic transitions; society was moving away from the paternalism of the agrarian economy towards the emerging social and political relationships associated with industrial capitalism. One of Thompson’s key interventions was to take seriously the agency of his historical subjects. As a consequence, Thompson sought to understand the ideas that people used to justify protest; their “legitimizing notions.” In the case of the eighteenth-century bread riot, he argues that “the men and women in the crowd were informed by the belief that they were defending traditional rights and customs; and, in general, that they were supported by the wider consensus in the community.” This relationship was emblematic of a moral economy that structured early-modern English society and placed the needs of the community before the profits of any one of its members.

I wonder whether this concept of a moral economy – modified to fit the present – encapsulates the protests that we have seen over the past three weeks and also, perhaps, the grievances espoused by those who voted Republican in this year’s US election. Facing social and economic rupture as manufacturing and fossil fuel economies shift rapidly, in the election millions of Americans looked to a candidate who reflected a world similar to their own and – importantly – distant from the culture and politics that have overseen these changes. Though policies associated with White House aide Steve Bannon will likely fail to meet their needs (at least without trampling all over the rights of others), there can be little doubt that much like the protesters during the Arab Spring, Occupy, #IdleNoMore and Black Lives Matters, the executive’s electoral base is comprised of people who increasingly feel that the mid-twentieth-century American dream is no longer possible. Much like the protesters in these larger movements, whom for many represent groups historically without an influential voice, Republican-voter core grievances seem to be the same: the political and economic system is not working for them. A moral economy – in this case premised on an enlightenment-focused concept of attainable middle-class status – has been violated.

To better see these parallels we might turn to a recent essay by Thomas Frank published in last week’s Guardian newspaper. Though focused on Steve Bannon’s politics, Frank outlines the key areas where the American political system has rotted. Here he demonstrates the root causes of the American political crisis. Though he does not use the language of the moral economy, Frank’s conclusion suggests that discontent on both the political right and left is anchored in two fundamentally different concepts of “traditional rights and customs.” For Republicans, Frank suggests that the rights and customs underpinning the American dream were broken during the 1960s and (though he doesn’t say this explicitly) in the ways that key tenets of the civil rights movement have informed American public policy. For those on the left, grievances align more tightly around a profound sense of disconnect between the public – specifically workers – and the political class (and their financial influences) that has accompanied the implementation of neoliberal economic policies since at least the mid-to-late-1970s.

It is in this alignment between the grievances of the right and left, and the frequency of mass protest over the past couple of weeks, which has me wondering about the broader meaning of the crowd. This is where I think Rudé’s analysis of the French Revolution may provide guidance. Rather than the French Revolution being framed as a revolt of “unemployed country-workers” or sparked by the intellects of the Enlightenment, Rudé suggests instead that the crowds of the Revolution comprised various distinct groups with diverse interests (“craftsmen, shopkeepers and journeymen”) responding similarly to external stimuli.

This more nuanced and analytical approach to the crowd has been absent from much press coverage. Though in volume these events have been well covered, in their substance, questions remain. Explanations for the crowd tend to be focused on their immediate causes rather than longer-term context; its composition and local leadership rarely explored in favour of overarching commentary. There are a series of questions that remain and are worth asking in greater detail:

Historians of the crowd, I suspect, have something to say about this, both in terms of how these questions are approached and in shaping the answers given.

Tom Peace is an assistant professor of Canadian History at Huron University College and an editor at ActiveHistory.ca

[1] Readers might be skeptical of the numbers here, but in the half-hour I spent skimming the Internet here’s what I uncovered: On January 28-29 following the travel ban, there were protests at the airports serving Albuquerque, Atlanta (5,000-7,000), Birmingham, Boise (600), Boston, Charlotte (60), Chicago, Columbus (hundreds), Dallas (200), Denver (dozens), Detroit (thousands), Fairfax (dozens), Honolulu (100), Los Angeles (thousands), Louisville (100), Miami, Minneapolis (1,000), Missoula, New York (2,000), Newark (120), Phoenix, Philadelphia (5,000-6,000), both Portlands (OR and ME), San Diego (2,000), San Francisco (hundreds), Seattle (3,000), Washington (Dulles and the White House, thousands). Even the low reported numbers from these 28 protests come to at least 18,000 people. Think Progress has a full list of protests that were planned that weekend. Also, for those skeptical that this new administration discriminates by religion, see these stories about Canadian Muslims being rejected entry to the United States (here and here).

3 thoughts on “Does the Crowd Matter? The Moral Economy in the Twenty-First Century”