Over the past year, Canada’s history has been centre stage. Controversy about commemoration of the past has fuelled public discussion and debate. In addition to #Canada150, the sesquicentennial anniversary of Canadian Confederation, there were impassioned arguments over the legacy of historical figures such as Hector Langevin, Egerton Ryerson, Joseph Trutch, Nicholas Flood Davin, Mathew Baillie Begbie, Edward Cornwallis, and Sir John A. Macdonald. 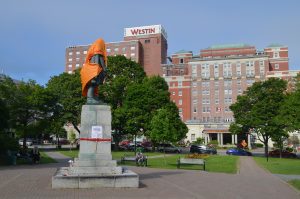 Rather than weigh in on these specific controversies, in this essay I offer a history educator’s perspective on how we might think historically about commemoration controversies. Building upon Yale University’s Witt Committee’s “Principles of Renaming, this essay draws from Peter Seixas’ historical thinking framework to propose a series of questions designed to support teachers, students, and members of the public in making reasoned judgments about how best to respond to these controversies.

The Witt Committee’s Principles of Renaming

Many commentators on these issues point to Yale University’s Report of the Committee to Establish Principles of Renaming as a useful set of criteria for assessing whether commemorations of historical actors and events should be revisited. The twelve-person committee chaired by history and law professor John Fabian Witt was struck after decades of protests about Calhoun College, one of twelve undergraduate residential colleges at Yale. John C. Calhoun, for whom the college was named in 1931, graduated from Yale in 1804, served as U.S. congressman for South Carolina, secretary of war, vice president, secretary of state, and senator, and was known for strongly defending slavery and white Southern interests.

One of the guiding presumptions of the Witt Committee was that renaming a building should be an exceptional event especially when named for someone who made major contributions to Yale. In outlining the principles of renaming the Witt Committee considered the present, the era of the namesake’s life and work, the context of the original naming decision, and the nature of the building under consideration. The committee determined four guiding questions:

In its final report the Witt Committee explained that the decision to rename a building includes obligations to ensure that the name is not erased from history and continues to be displayed on campus markers such as museum exhibits, public art, plaques, or signs where the legacy of the individual is contextualized. They also recommended that community input and scholarly expertise is essential when considering whether to change a building name. As such, three historical advisers appointed by the President of Yale to apply the Witt Committee’s principles to the naming of Calhoun College unanimously recommended that the name should be changed. In September 2017 Calhoun College was renamed Hopper College in honour of Grace Murray Hopper, a trailblazing computer scientist, mathematician, teacher, and naval officer.

Although several other American universities have employed the Witt Committee’s renaming principles to resolve controversies on their campuses, these principles cannot be directly applied to public commemoration controversies in Canada.

The set of principles are unique to the context of renaming debates at historic American universities like Yale University. The Witt Committee presumed that renaming historical commemorations should be an exceptional event, where – in the Canadian context – there might be circumstances where renaming should be a necessary and commonplace event. Elliot Worsfold contends, for example, that historical figures do not have a single “principal legacy,”  but rather that their legacy is shaped by multiple and often diverse perspectives, beliefs, and values within Canadian society.

Despite these critiques of the Witt Committee’s renaming principles, the principles serve as an instructive starting point for developing a set of questions for helping teachers, students, and the general public think historically about commemoration controversies.

Peter Seixas’s historical thinking framework has been tremendously influential over the past decade. The six historical thinking concepts that comprise the framework are central to provincial and territorial social studies and history curricula throughout Canada, numerous textbooks, books, and classroom resources include an explicit focus on the concepts. Since its inception, thousands of K-12 teachers, museum professionals, historians, and others have attended Historical Thinking Summer Institutes and professional learning opportunities.

This work builds upon British, German, and American theories of history education and were conceptualized to be intelligible and communicable to teachers and students, yet generative enough to guide explorations of fundamental epistemological and ontological problems of history.

The six historical thinking concepts are similar to Lee and Ashby’s notion of second order concepts in that they are procedural, focus on how to do history, and shape our understanding of the discipline as a form of knowledge. The six second order concepts included in Seixas’ framework are taught alongside first order substantive concepts such as revolution, president, and nation that centre on what history is about. Seixas suggests that the six historical thinking concepts resemble concepts, but also function as problems, tensions, or difficulties in doing history that require students to comprehend and negotiate productive solutions to present-day problems. Thus, historical thinking focuses on deepening students’ understanding of historical content, while also developing increasingly sophisticated understandings of how historical knowledge is produced.

In the section below I have used Seixas’ model of historical thinking to develop a framework of questions that can be utilized by teachers, students, and the general public to think historically about commemoration controversies.

Primary Source Evidence focuses on helping students make plausible inferences about the content and context of primary source traces and accounts in order to respond to historical questions and inquiries. Monuments, statues, and other structures that commemorate historical events, people, or groups have their own history distinct from the historical event, person, or group being commemorated.

Historical Significance invites students to assess of what events, people, or groups from the past are important to learn, write, and talk about.

Continuity and Change invites students to examine what has changed and what has stayed the same over time.

Cause and Consequence focuses on the relationship between the actions of historical actors and the conditions and circumstances that influenced historical events.

The Ethical Dimension invites students to make ethical judgments about whether the actions of historical actors in the past were justified, decisions about assigning blame or credit to individuals or groups for their actions, and conclusions about what obligations those in the present owe to victims, heroes, and others who made sacrifices in the past that benefit people in the present. Controversies about what should be done about commemorations are central to the Ethical Dimension and the previous five historical thinking concepts can be seen as important building blocks for making reasoned and plausible judgments about commemorations.

Lindsay Gibson is an assistant professor of elementary education at the University of Alberta.