Last week, following widespread Black Lives Matter demonstrations across Canada and the rest of the world, a push began to rename Toronto’s Dundas Street. Building upon a similar movement in Edinburgh, it was not long before the call to remove the Dundas name spread to other places, such as, in Ontario, London’s main commercial street and Hamilton’s west-end suburb. Dundas’s namesake has been deeply emblazoned across the province.

The impetus for this removal stems from the person these designations sought to honour: Henry Dundas, 1st Viscount Melville.

Dundas was a Scottish aristocrat and key British cabinet member under William Pitt the Younger. In 1792, Dundas (who had tight links to the West Indies) led the charge to modify a parliamentary motion to immediately abolish the slave trade. Here, it was the addition of one word – and Dundas’s subsequent actions – that tarnished his name. Much to well-known abolitionist William Wilberforce’s chagrin, Dundas amended a motion to abolish slavery by adding the word “gradually.” Dundas was then pressured to put forth another motion calling for an end to the trade by 1800. When the original motion was amended to end the trade four years earlier, in 1796, Dundas walked away from the bill. For the rest of his career, Henry Dundas opposed abolitionist efforts (you can read more about him here and here). Those calling for Dundas’s removal blame him for delaying abolition by as much as 15 years; others (specifically his family) argue that he was in fact an abolitionist and his role during these years governed by political pragmatism.

I am not an expert in the career of Henry Dundas, but as a historian who grew up in Dundas, Ontario and now frequents Dundas Street in downtown London, I do know a bit about the places that people want renamed.

When I grew up, I was told that the Dundas Streets in both Toronto and London took on these monikers because they led to Dundas the town. No one really talked about who the town was named after. What we did talk about, though, was the Governor’s Road.

The Governor’s Road was the first road to be built in what would become Ontario. Elsewhere, it was (and is) called Dundas Street.

Understanding the Dundas Street/Governor’s Road connection is important because it teaches us much about Ontario’s early history and how calls to rename Dundas might serve as an opportunity to better acknowledge that past.

Under then-Lieutenant Governor John Graves Simcoe, Dundas Street was built in 1794-95. Its purpose was to connect what was known as the Head of the Lake (present-day Hamilton) to the Forks of the Thames River (present-day London). It was part of Simcoe’s plan to militarize the new colony, located just north of the expanding United States. He named this road, and the small piece of land at its eastern end, after his friend, Henry Dundas.

Plan of the River Thames from the Upper Forks to its entrance into Lake St Clair. 7 Nov 1795. Archives of Ontario.

The places Simcoe sought to connect were not, however, British territory. Having just been created in 1791, the new colony needed to legally justify its expansion onto Indigenous lands. British law required (and still requires under Canadian law) the making of treaties with a region’s First Peoples. Take a close look at Patrick McNiff’s 1795 Plan of the River Thames (above). You will notice that north of the river it clearly marks Chippewa (Anishinaabe) territory, while to its south, townships have already been demarcated. This is because in 1795, only the land south of the river (and along Lake St. Clair) had been negotiated through treaty. In fact, the shape of the London Township treaty (No. 6 shown below), which was negotiated the following year, demonstrates the importance of the road. Dundas Street marks the northern-eastern border of the treaty territory and explains the territory’s narrow and irregular shape on its eastern side. 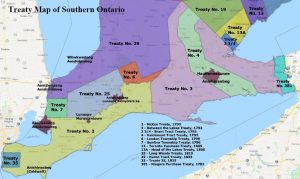 Dundas Street’s relationship to earlier travel routes makes this even clearer. If you look again at McNiff’s map, you will see Dundas Street running from the map’s eastern edge through the proposed town of Oxford (present-day Woodstock) and through to London. Immediately below this route, you will see another pathway. This one is a more ancient route traveled by Anishinaabe, Haudenosaunee, and Leni-Lenape to avoid the open waters of Lake Erie. Notice, however, how the two routes serve the same purpose: they go overland from Lake Ontario to about London and then use the river to travel through to Lake St. Clair. 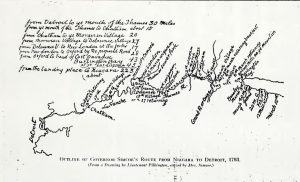 In fact, if you look at another map, drawn in 1793, by an officer who traveled the region with Simcoe (above), you can see that it was this Indigenous route on which Dundas Street was modeled. Simcoe and his party left the capital at Newark (Niagara) for the Head of the Lake. From there they traveled by land to the Grand River, stopping at Six Nations, and then continuing through the Forks of the Thames and onto Detroit; stopping, of course, at Chippewa and Munsee-Delaware communities along the way. The first part of this route, and a clearer demarcation of Dundas Street is well laid out on the map below, also from 1793.

Part of the River Thames in Upper Canada, from whence it discharges itself into Lake St. Clair to Oxford in its Upper Forks, and from Hence to the head of Burlington Bay, shewing the route of Lieut. Governor Simcoe in the year 1793. (Library and Archives Canada)

This is not a route that the British created, it is one that was well known and used by the Anishinaabe, Haudenosaunee, and Leni-Lenape who called this place home. The Governor’s Road – or Dundas Street – is essentially a colonial superimposition onto this reality. It is the first Colonization Road.

Furthermore, if you look at the map above, and know the area closely, the path Simcoe took to Six Nations is more-or-less Ontario’s old Highway Two. Once known as the King’s Highway; it connected Windsor, Ontario to Halifax, Nova Scotia. Its beginning, in 1794, was as the Governor’s Road: Dundas Street.

Here is where the Rename Dundas Street initiative presents us with a real opportunity to not only move our commemorative gaze away from a controversial figure like Henry Dundas, but to highlight histories that have not been well told in the past but are critical to understanding our present and our future.

First, as I have done here, thinking about Dundas Street and its history makes the road’s colonial history much more transparent. It calls attention to the connection between our everyday infrastructure – like roads – our treaty history, and the histories that pre-date Upper Canada’s creation. We can use this as an opportunity to rename these places in such a way that better addresses these past realities.

Second, as a roadway that stretches from two of Canada’s oldest and strongest Black communities (Windsor/Chatham in Ontario and Halifax in Nova Scotia), Highway Two presents opportunities to teach eastern Canadians a more complex – and more accurate – version of the past. Here are some examples:

In Toronto, rather than commemorating Henry Dundas, perhaps the city could use this moment as an opportunity to recognize Chloe Cooley, the woman whose resistance to her enslavement sparked the 1793 Act to Limit Slavery in Upper Canada. Though she is recognized with a heritage plaque in Niagara, prominent commemoration in the province’s biggest city would call much greater attention to this important history.

In London, the name Dundas Street might be replaced by that of Tony Small. Small, who had been enslaved in South Carolina, developed a lifelong friendship with radical Irish politician Edward Fitzgerald on the battlefields of the American Revolution. Together, in 1789, Small and Fitzgerald traveled across eastern North America. In the company of Haudenosaunee leader Thayendanegea (Joseph Brant), they took the same path Simcoe would take four years later from Head of the Lake to Detroit. Small is the first known Black person to visit the London area.

Cooley and Small demonstrate a different narrative of Canadian history that is opened by rethinking Dundas and the places named after him. Cooley demonstrates the reality that many early White-Canadians were enslavers and built their wealth on stolen lives. Small, by contrast, demonstrates that enslavement did not define the lives of all Black people in early Canada; his connection to Fitzgerald also illustrates well the widespread nature of radical politics in the 1790s and early 1800s. In many ways, the issues of his day continue to be the issues of our own. 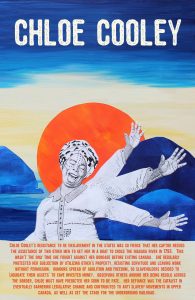 Thomas Peace is an assistant professor of Canadian History and co-director of the Community History Centre at Huron University College.

5 thoughts on “So long Dundas: From Colonization to Decolonization Road?”