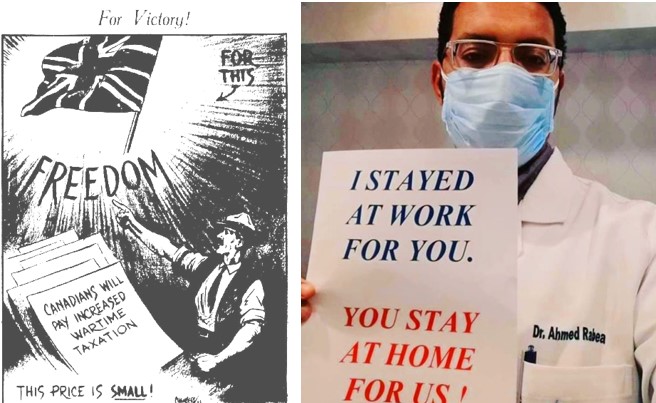 Imagine a 500% increase in business and a steady loss of your best staff, snaffled up by competing firms who double their salaries. It’s 1944. You’re the federal income tax department. Tens of thousands of unassessed returns pile up. By 1949, the backlog reaches 1.9 million.

The Canadian Emergency Relief Program (CERB) is today’s explosively expanded program. And, just as there was with the postwar income tax system, there will be a clean-up. In this post, I’ll sketch some parallels between the two cases and dive into some details about successes, failures, and lessons.

The creation of a mass income tax as an emergency measure during the Second World War was a remarkable accomplishment. In a few years, and especially during a few months in 1942, income taxation went from affecting 300,000 Canadians to more than 2 million. By 1951, income taxpayers numbered almost 3 million (about two-thirds of the labour force).[1] Organizing citizens to pay tax on that scale was a massive undertaking. Measures taken hastily during the crisis required clean-up, however, both quickly and later, as part of post-war changes.

Those circumstances should remind us of the conditions in March 2020, when again the federal government, under withering pressure of time, needed to devise a system that would involve millions of Canadians and their money. The various emergency programs that have been rolled out over the last few months – and especially the Canadian Emergency Relief Program (CERB) – have been by now a subject of worries and criticisms and hopes. Are they fair? Will they create problems after the crisis? Do they foreshadow good things or bad in some new normal? As I watch current events around COVID-19 unfold, I have been thinking that, as difficult as our current situation is, we are not yet anywhere near the kind of mess in public finance that unfolded after the new tax measures of the 1942 budget and during the early years of reconstruction. Among the similar problems, worries, and solutions, there are a few examples that might help us anticipate what comes next.

The obvious similarity is that both programs were needed urgently for a (mainly) unchallenged purpose. Then: Pay for the war. Now: Stem the spread of a life-threatening disease. Shared purpose is, of course, good for compliance, but as Jeff Keshen has shown us, there were sinners as well as saints in Canada during the war against Naziism. People complained loudly about unfair taxation and even “the little guy” found ways to avoid paying. Complaints about big public programs, quickly launched, are always to be expected and some are no doubt warranted. Some of the complaints made in 1942 were certainly justified, and Finance made changes in the 1943 budget in response. Compliance is never 100 per cent. Some people will cheat, whether from necessity or moral failure. Governments have to work hard to get the most effective mix of persuasion and enforcement. Ensuring that the purpose of the program, whether tax or benefit, is understood and widely endorsed is essential.

Persuasion is cheaper than enforcement (both in dollars and good will). Then as now, a host of problems arose in what we might politely call communications. Suddenly there were literally millions of people who had to be asked to supply information legibly and honestly. The War Information Board pumped out propaganda cartoons and educational advertising. A Rumour Clinic supplied authoritative responses to the “fake news” of the day. For the numerate, there were densely typed pay packet inserts. The newspapers did their best to help, with inspirational cartoons and advice columns. But it was an enormous shift from normal, and it was only after the war that Revenue turned towards a threatening style of address. Undetected dodging during the crisis might be a regrettable fact of life, but if personal income tax was to become important in peace time, the masses had to be trained as income tax payers.

The alternative — effective enforcement —  was, simply, a low priority for spending during the war. The pre-war income tax had been designed for business or professional people and assessing their returns was a thorough process. In Senate hearings after the war members joked that, during the war, the department must have had to take up “mass production” or “assembly line” processes. The tax commissioner retorted that he preferred “more sympathetic” methods. He was politely shown the door. His two successors went on a hiring spree and pioneered sampling and bulk processing methods.[2] And the compliance pitch went from patriotism to prudence. Public relations efforts produced a host of newspaper stories and one especially powerful Maclean’s story that touted the frightening effectiveness of the new improved tax authority:  “Perhaps 1 in 7 chisels on his income tax, but it’s becoming a dangerous game – revenuers are on the trail!” 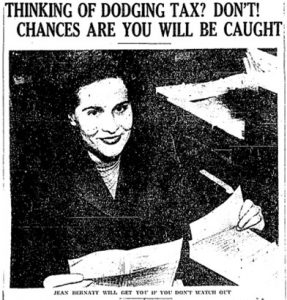 Our current logistical problems are also serious, although information systems designed to deal rapidly with citizens en masse are now a normal part of our common life. People in the twitterverse who understand information systems and public management were nonetheless biting their nails as the date of the CERB roll-out approached. All of the call-in “help” services – banks, the CRA, even phone companies – were limiting service on other lines of business and warning of delays. There have, of course, been complaints about CERB service, but the rapid and smooth issue of those payments kept millions at home at a crucial moment.

And we have started to see a shift in the tone of the federal government’s communications about the CERB. The “we’ve got your back” message is now alloyed, a bit, with a warning that cheating won’t escape the post-crisis enforcement efforts. It is an open question whether today’s information collection methods will equip the feds ever to really know the scale of illegitimate claims on the relief funds.

Part of what may be confusing in our current crisis, as in the transition from wartime tax to peacetime, is that government messaging combines different, contradictory elements. Citizens are addressed en masse both as honourable people who just need a bit of help on the way to do their part and as chiselling rogues who are predictably greedy and deceitful. And so the government seems both foolishly naïve to trust those rogues and deplorably unfair in castigating the decent Canadians who are doing their best. Short of privacy-invading precision-targeting of messages, though, a mix of warning and helpful support is surely to be expected: the citizenry is a mixed lot, after all.

By way of helpful support after the war there was introduced a simplified, pleasingly designed tax form, aimed at the ordinary wage or salary earner. And a new court of appeal was introduced that required only a $15 fee to bring your case against the Revenue. For taxpayers with more complex kinds of business affairs, the statute also conferred more explicit obligations, leaving less room for unpredictable discretionary judgement by the Revenue authority. Taxpayer rights began to emerge. 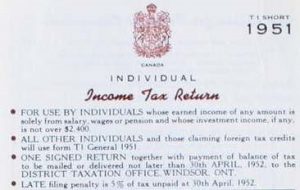 Practicing the supportive “nudge” before behavioural economics was a thing, the post-war tax authority also took steps to make tax filing a route to a refund, not a bill. The old model had been designed to ensure that everyone who benefitted from public spending had to pay a bit of a bill at tax time, to be sure they felt the tax collector’s “pinch.” By 1951, Revenue realized that this approach was merely costing them time and money and good will, positioning them as bullying persecutors of poor people who owed small amounts. And so employers were instructed to deduct just a bit more from pay cheques. Result: a welcome refund once a year! An incentive to do that nasty tax form!

It’s easy to see in these changes some parallels to lessons from the CERB. Income assistance delivery in Canada is plagued by complex processes and stressful uncertainties. The complexity is supposedly justified by prevention of fraud or waste. But really, there must be simpler processes that can serve large numbers of ordinary cases where the risk of fraud is just not worth the price of policing.

Specifically in relation to the CERB, especially as it is offered for more weeks, there is a growing risk that those who collect it may end up having, not a refund in 2021, but a small tax bill. If they have had only minimum wage earnings otherwise in 2020 and through the first part of 2021, saving to pay a CERB tax bill could be an extraordinary hardship. While people whose income allows them to save must, of course, plan ahead to pay tax on their CERB income, we should think twice about trying to collect very small tax debts from poor people in 2021.

The man who administered the pre-war income tax knew this.  “Putting citizens in the position of the debtor is a most undesirable feature to let arise in our national affairs, and we try to stop it.”[3]

Launching big programs in response to a crisis is always going to require clean-up. Partisans and even some reasonable people will differ in their assessment of how well the current government has chosen its options. But now, as in the crisis and clean-up of the Second World War, no one should expect perfection.

Shirley Tillotson is professor emeritus in the Department of History, Dalhousie University, and Inglis Professor at the University of King’s College. She tweets at @stillots1.

[1] Unless otherwise indicated, this blog is based on material in Shirley Tillotson, Give and Take.

One thought on “From Crisis to Clean-Up”