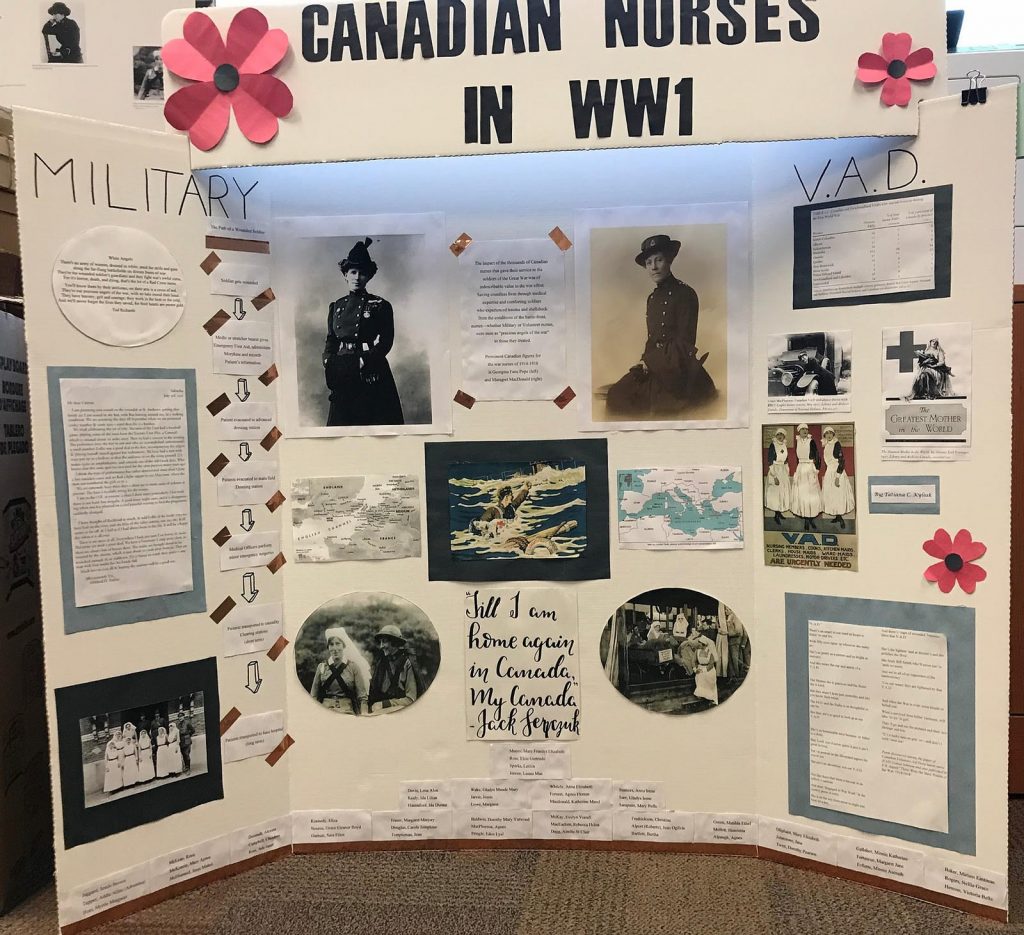 “Canadian Nurses in WWI.” This poster, submitted by Tatiana Kyliuk as a research creation project for History 201: Canada From Confederation to World War II (Winter 2019) at the University of Regina, well illustrates the ways that students can communicate historical research through visual media. In addition to submitting this poster, Kyliuk also provided a 10 minute presentation and annotated bibliography. Photo used with permission of Tatiana Kyliuk.

This post is part two of Donica Belisle’s three-part series, “Taking the ‘discipline’ out of History: moving beyond the limits of scholarly writing through a research creation assignment.” Part one was published last week.

In Winter 2019 I devised an assignment in a second-year Canadian survey course (Canada From Confederation to World War II) that enabled students to choose their own research outputs. That is, I gave them the option of either writing an essay or creating something more experimental.

I chose this course deliberately for this exercise. This junior level course has a cap of 50 enrollments, and it usually fills. Many students who take this course are from the Faculties of Education, Engineering, and Business. Many, too, are undeclared majors from within the Faculty of Arts. This course thus offered a reasonable testing ground to see if students without intensive disciplinary training might be interested in alternative communication formats.

By running what I called a research creation assignment in this course, my intent was to see if students who were relatively new to the historical ‘discipline,’ and who had a variety of academic interests and career objectives, would approach the issue of dissemination differently from the essay format, if they had the choice. I also ran the experiment to see which research outputs would prove most popular. For example, would they all want to do podcasts? Would they perhaps be interested in more niche options such as walking tours or dramatical re-enactments?

As it turned out, more than half of the course’s 48 students chose the research creation option. Before explaining what they chose to do, it should be noted here that I did give them ample guidance in terms of what they could do. The specific instructions are available here; I also spent much time in class explaining how they might approach this assignment. That being said, I also now realize that I should have provided even more guidance.

Following the grading of these assignments, I uploaded (with permission) many of them to my website. They are housed permanently there.

What, then, were the outcomes of this research creation assignment? Specific observations are below.

As it turned out, half of the class preferred written essays over alternatives. In later conversations with students, I learned that many had chosen to do essays because they were familiar with the format, they were uncomfortable with open-ended experimentation, and they had previously written History essays in high school. Thus, they felt more prepared for writing an essay than they did for any other type of assignment.

This result, in turn, underscores the importance of high schools in preparing students for university-level historical education.

Albeit somewhat indirectly, this result also speaks to the availability of undergraduate handbooks that train students to write essays. Within the student handbook market, there are numerous guidebooks available on how to compose scholarly papers. In comparison, there are few readily accessible manuals on how to prepare multimedia and non-traditional assignments.

When I queried the class as to why more people had not undertaken digital assignments, the students responded that they did not know how to make them. They were also concerned about how such outputs might be evaluated.

Contrary to much touting often heard about students’ digital literacy, this result indicated that very few students were willing to submit digital creations for scholarly assessment. As well, digital outputs are intimidating to students. In future assignments of digital media, therefore, much more coaching will be provided.

Students who created research-based fiction told me that they were excited to combine their creative writing skills with historical research. In their view, it was the drama and the personal stories of history that were most compelling; for some it was historical fiction that drew them to history in the first place.

This response shows that despite some professional historians’ quest to extinguish drama and narrative from historical practice, it is clear that a certain hunger exists – even among our own students – for historical tales that can be by turns engaging, enthralling, lesson-teaching, or entertaining, or some combination thereof.

Drawing on ‘Outside’ Skills

Education students were particularly inventive, submitting posters (3), for which they also prepared presentations; and a lesson plan (1). This finding reinforces the importance of enabling students to draw on existing skills.

One student who is a singer/songwriter submitted an original song.

Popularity and Pitfalls of Visual Media

When students make mistakes in visual media, including by introducing historical anachronisms, they are glaring. Students with interest in visual media should recognize this pitfall prior to creating their assignments.

Research Creation and the Potential for Public Dissemination

Many of the submissions received were highly suitable for public dissemination. As such, the class and I decided to hold, at the end of term, a public exhibit of all assignments.  The poster for this event is available on my website.

Through this event, we learned:

In Part Three of this series, Dr. Belisle will evaluate these results and recommend best practices for such assignments. It will be published on 2 February 2021.

Dr. Donica Belisle is currently an Associate Professor of History at the University of Regina, located in Treaty 4 Territory with a presence in Treaty 6. These are the territories of the nêhiyawak, Anihsinapek, Dakota, Lakota, and Nakoda, and the homeland of the Métis/Michif Nation. Her current book project is on the global history of Canadian sugar. She is the author of Purchasing Power: Women and the Rise of Canadian Consumer Culture (University of Toronto Press 2020) and the award winning Retail Nation: Department Stores and the Making of Modern Canada (UBC Press 2011). She also writes about food, whiteness, gender and history. Find links to her works and more at www.donicabelisle.com.