This post by Lilian Radovac and Simon Vickers is part of the “(In)Security in the Time of COVID-19” series. Read the rest of the series here.

Alternative Toronto is a DIY digital archive and exhibition space that documents the history of alternative communities in the Greater Toronto Area from 1980 to 1999. As archive director and volunteer coordinator for Alternative Toronto, we are keenly aware of the precarious labour and care work that is represented in each item in the archive, from the creation of the original analog artefact to its contemporary digitization, contextualization and description. We also know this labour has costs that keep historical self-representation out of the hands of people and communities who most urgently need to engage in it. This essay surveys the past, present and potential future of community archives in Canada and challenges funding agencies to do more to support community-engaged memory work.

When viewed in retrospect, the 1970s was a comparatively good time for grassroots community archives in Toronto. Cheap rent near the downtown core and the availability of government grants for community initiatives like the Local Initiatives and Opportunities for Youth programs made it possible for collectives to build alternatives to mainstream archives on their own terms. In downtown Toronto, these conditions allowed for at least three different Left and counterculture collectives, each organized around the publication of a periodical, to begin accumulating collections of materials. In this way, activists associated with The Body Politic, The Other Woman, and Community Information News founded archives that would eventually become The ArQuives, the Canadian Women’s Movement Archives (CWMA), and Connexions respectively.

Although the histories of each of these archives are fascinating and can be explored in more depth here, here, and here, when taken together they illustrate how material conditions – that is, the availability and cost of the resources that are needed to create archives – shaped the archival landscape of Left and counterculture organizing in post-1970 Toronto. Unlike state archives, which had access to steady streams of funding, the persistent precarity of these three new archive projects meant that activists were constantly measuring acquisitions against the reality that they were one bad month away from losing access to the space, labour, and materials they needed to keep going.

The window of federal grant funding for autonomous archive projects began to close by the end of the 1970s during a wave of gentrification that was making it harder to meet the daily cost of keeping an archive. The ArQuives, CWMA, and Connexions were able to persevere with a little bit of luck and the hard work of volunteers, but also through private donations or by seeking shelter through connections to non-profits, academia, or religious bodies. Still, the survival of these three archives was never a given, and there were likely others that could not withstand their growing precarity. 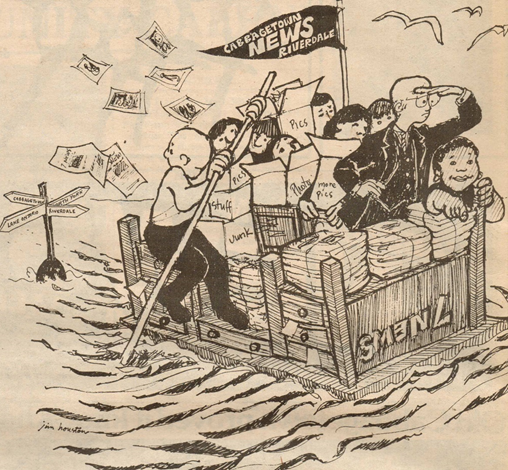 Further, pro-gentrification organizations like the Cabbagetown Business Improvement Association encouraged police harassment of already over-policed populations, making it more dangerous for some activists to save material evidence of their work.[1] The 1977 police raid of the The Body Politic is a well-known example wherein the police stole archival documents from the neighbouring Canadian Gay Archive. The criminalization of sex-work also made it dangerous for sex-workers to hold and preserve materials that might incriminate them. As long-time activist Monica Forrester has described, the systemic devaluing of the lives of trans and racialized sex-workers meant that daily survival often took precedence over documenting their activism. Racism within the institutions and organizations that should have provided shelter for their archival collections further marginalized the experiences of Black and Indigenous people and People of Colour in archival records.[2]

These barriers to creating and saving archival records are systemic and are currently being contested by organizers, activists, archivists, and historians embedded in communities linked through struggle. Historians with distant or more tenuous connections to these struggles can, however, assist by intervening in the various points at which precarity creates silences in the historical record. In the words of historical theorist Michel-Rolph Trouillot: “professional historians alone do not set the narrative framework into which their stories fit. Most often, someone else has entered the scene and set the cycle of silences.”[3]

Our experience with Alternative Toronto reflects the current economic and archival landscape. The project was funded as a three-year pilot research initiative through the Social Sciences and Humanities Research Council’s Insight Development Grant program. This grant was awarded to the project’s director, Lilian Radovac, while she was a postdoctoral research fellow at New York University and then supported with a part-time, contractually limited term appointment at the University of Toronto Mississauga, which has since ended. Alternative Toronto was generously provided with office space at the McLuhan Centre for Culture and Technology during its first year, but has otherwise not had access to dedicated work space at the university. Instead, we’ve squatted the offices of the project’s research assistants and the living rooms of our contributors, and have held community archive meetings in restaurants, bars and public libraries. As the University of Toronto does not permit limited-term faculty to apply for external research funding, we’ve elected to forge ahead as an independent project and are excited to join the Archive/Counter-Archive network as a community partner.[4]

SSHRC provides one of only two stable federal funding sources that are currently available to community archive projects, the other being Library and Archives Canada’s Documentary Heritage Communities Program (DHCP). Provincial grants are also available, but these vary by location; in Ontario, the primary source is the arts, culture and heritage stream of the Trillium Foundation. To be eligible for SSHRC funding one must have an affiliation at a Canadian academic institution, and, at certain universities, a tenured or tenure-track position, which of course limits the range of potential applicants. The DHCP grant is open to established heritage organizations and registered non-profits, and therefore requires that projects already possess institutional status. Notably, neither of these funding sources provide subsistence or health care costs for community archivists, which it is presumed they have other ways of meeting, nor long-term funding for operating expenses. This is important when working in a city where, pre-COVID, the average rent for a 1-bedroom apartment exceeded $2,000 per month.

Canadian historians and archivists have belatedly recognized that our memory institutions have ignored vast swaths of our history, and are now embarking on diversity and inclusion initiatives aimed at redressing these omissions. As Cheryl Thompson, Charmaine Nelson, Mark V. Campbell and other Black scholars have noted, this work must begin with local and diasporic primary sources and a commitment to anti-racist and decolonial contextualization and interpretation. It must also reckon with the exclusion of working- and poverty-class and disabled community members from our academic and memory institutions, whose access has decreased as both jobs and funding opportunities have been lost to austerity. Any lasting effort to democratize Canadian history will require a paradigm shift in the way that we fund memory work in this country, as well as recognition that the material conditions of this work determine who gets to do it and why. To paraphrase Brecht: food first, then archives.

There are two historical examples we can draw from for inspiration, both of which derive from the arts rather than the heritage sector. The first is the Canada Council’s Explorations Program, which ran from 1973 to 1998 and supported interdisciplinary, transdisciplinary and experimental work by emerging artists. As Andrea Fatona has documented, the Explorations Program included grants for “new forms of expression, communication, and public participation in the arts, humanities and social sciences” and encouraged “new insights into the Canadian cultural and historical heritage.”[5] The program allowed non-professional artists to apply and encouraged regional, community-based projects that wouldn’t find support anywhere else. The program would become an important funding source for racialized artists, women, and later, deaf and disability arts organizations, whose participation is noted in a 2012 report by the Council’s Equity Office.

The second example is the National Film Board’s Challenge for Change/Société Nouvelle program, which funded activist documentary film and video work from 1967 until 1980. Documented in the 2010 collection by Thomas Waugh, Ezra Winton and Michael Baker, the program prioritized “participatory, social-change media” that, like the Explorations Program, deemphasized professional expertise in favour of community involvement, an approach that facilitated the work of the Indian Film Crew and an early incarnation of the feminist film unit Studio D. It also foregrounded discussions of poverty and centred community organizers as linchpins in what became known as the Fogo Process, an approach to documentary filmmaking that privileged process over product and solutions to community problems over purely aesthetic considerations.

As COVID-19 transforms every facet of our lives, we face both unprecedented challenges and, we hope, opportunities for change. At this moment of traumatic historical rupture, we call on funding agencies to simultaneously honour the past and envision better futures by renewing their commitment to interdisciplinary, community-engaged memory work. This should begin with support for a diverse range of locally based archive projects that draw on the expertise of community members and their surviving elders, and encourage the collaboration of historians, artists, archivists, activists and technologists, professional and amateur alike.

In short, we propose a New Deal for Canadian history, heritage and archives that prioritizes the people and communities whose voices are absent in the stories we tell about ourselves. With support, we can do this.

Lilian Radovac is a media and cultural historian and the director of the Alternative Toronto digital community archive. Her research explores the histories and cultures of cities, with a focus on sound, technology and social movements. You can visit her website here.

Simon Vickers is the volunteer coordinator for Alternative Toronto and a PhD Candidate in history at University of Toronto. He is nearing completion of his dissertation entitled “Jobs, Homes, and the Right to Exist: Neighbourhood Activism in Deindustrializing Toronto and Montreal, 1963-1989.”

[1] The Cabbagetown Business Improvement Association ran a campaign to evict what they referred to as “winos” from their area in 1976: “Old Cabbagetown Advert” 7 News, December 18, 1976.

[2] Syrus Marcus Ware interview with Monica Forrester and Chanelle Gallant, “Organizing on the Corner: Trans Women of Colour and Sex Worker Activism in Toronto in the 1980s and 1990s,” in Jin Haritaworn, Ghaida Moussa, and Syrus Marcus Ware eds., Marvellous Grounds: Queer of Colour Histories of Toronto (Toronto: Between the Lines, 2018), 23-33; Syrus Marcus Ware, “All Power to All People? Black LGBTTI2QQ Activism, Remembrance, and Archiving in Toronto,” Transgender Studies Quarterly 4 no. 2 (2017): 170-180.

Michel-Rolph Trouillot, Silencing the Past: Power and the Production of History (Boston: Beacon Press, 1995).