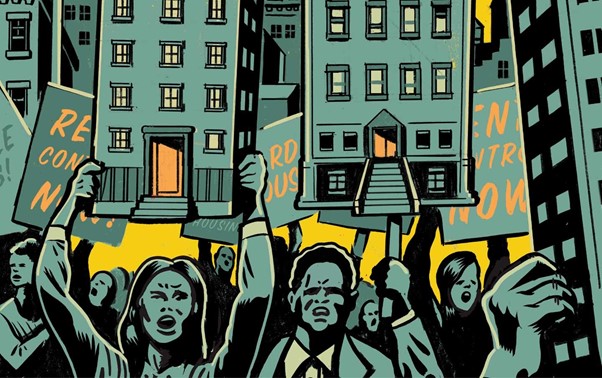 This post by Emily Gilbert concludes the “(In)Security in the Time of COVID-19” series. Read the rest of the series here.

By now, it should be widely recognized that the effects of the COVID-19 pandemic have been highly uneven. The elderly are particularly vulnerable, and especially those in long-term care. But there are other fault lines: racialized and low-income communities have had much higher rates of infection and death largely due to structural inequalities around housing conditions, low-paid and precarious work, and lack of paid sick leave. Access to and take-up of vaccines has also further accentuated these social disparities. All of this while the rich have accumulated even more wealth during the pandemic.

It is these kinds of issues that are taken up in the series “(In)Security in the Time of COVID-19,” but while the present conditions of the pandemic loom large, the posts probe the longer histories that have driven these inequities, with respect to, for example, racist immigration policies, profit-based housing markets, and labour policies that favour the private sector over workers. In so doing, they shift attention away from the prevalent discourses around national security that have taken hold in the 21st century—which are about fear and defense, and which invoke images of the military and militarized policing—and refocus our attention on social security, which comprises access to human needs such as housing and health care, more equitable working conditions, and more inclusionary policies and forms of belonging.

Several of the posts focus squarely on immigration. Avvy Go and Melanie Ng each point to a long history of explicit anti-Asian racism in federal immigration policies from the 19th century onwards. As they both argue, the anti-Asian racism during the current pandemic (and previously during the SARS crisis) did not arise out of nowhere. From another angle, Lauren Catterson examines the less explicitly discriminatory ways that the requirements for border documents have been wielded to exclude. For example, passport and visa requirements may seem universal rather than targeted, but they are mechanisms for sorting populations into desirable and undesirable nationalities. Or, there are the migrants whose status is made precarious because their migration is never allowed to be permanent. Edward Dunsworth shows how temporary contracts make agricultural workers them especially vulnerable to illness and death as they face inadequate and sometimes dangerous living and working conditions while in Canada.

While the articles on migration largely focus on federal policy, posts by Justin Panos and Max Mishler look to how local and regional government decisions, and particularly the shift to privatization and marketization, have increased insecurity. Panos details how austerity policies in Ontario led to the privatization of long-term care facilities—a move that weakened staff unions, led to understaffing, and subsequently a deterioration in resident care. Market forces have also generated more widespread housing insecurity, as Mishler examines, alongside gentrification and urban development, pushing up rents. During the pandemic, the crisis has become exacerbated, with even more tenants facing eviction, as unemployment and precarity have increased.

In speaking to the ways that the state manifests itself at various scales—federal, provincial, local—these posts point the way to opening up the presumed coherence of the state to see its tensions and contradictions. But this is not the main focus of the series. Rather, as they write in their introductory comments, the Working Group Collective is interested in illuminating the paradox whereby the state, writ large, presents itself as fostering life, while it actually works to create, exacerbate, and perpetuate vulnerability to death. The result, they note, drawing on the work of Ruth Wilson Gilmore, is a form of “organized social abandonment.”

One way to redress the inequities that they identify would be to demand a more benign state: a state that is more equitable and redistributive, and preferably also more accountable, responsible, and transparent. As the authors note, this could result in better policy: immigration legislation that does not discriminate, health care that is publicly available but also adequately funded, housing strategies that protect the vulnerable, and employment legislation that protects workers over profit. Many of the posts seem to be gesturing in this direction of state reform, even as they—perhaps paradoxically—point to the damage that the state can enact.

These changes would certainly be laudable, in that they would be preferable to what is in place currently. But they will not arise because of the benevolence of the state, but through the demands that are made on those who govern. Thus, most of the posts also attend to various examples of activism that are underway. These include how communities and organizations are pushing back against inequities and discrimination, from the Stop the Spread campaign of the Chinese Canadian National Council for Social Justice (Go), to protests by laid-off workers (Panos), to tenant movements such as Parkdale Organize, People’s Defense Toronto, Action Toronto, and Keep Your Rent coalition (Mishler).

Activism is also at the core of the posts by Lilian Radovac and Simon Vickers, who describe their project, Alternative Toronto, which has created an archive of community activism from 1980 to 1999 to ensure that there is a public record of these stories and voices. Another kind of archival project is described by Alex Luscombe and Alexander McClelland, who have created the Policing the Pandemic Mapping Project, which maps how the emergency orders unleashed during the COVID19 pandemic have been enforced. In the interview between Khaleel Grant and Beverly Bain, we hear of Bain’s decades of activism across countries and organizations, and insight onto the challenges of including a racial and more radical analytic, while also straddling local and international concerns.

Thus, while the posts by the Collective might thus be making demands on the state, they are also clearly attuned to the importance of energizing community response and activism. As this series shows, academic and other research and writing can help to amplify these efforts, and a historical lens can help to identify different strategies, tools, and resources that might be used in the present. Researchers can also be involved more directly in pressing for change, whether through their leadership in organizations (Grant and Bain), or making data public that can be mobilized for action (Radovac and Vickers; Luscombe and McClelland).

One lingering question, however, is whether the persistent focus on the state and community activism leaves the private sector too much off the hook. It is not that market forces are entirely absent from these discussions: Panos and Mishler take on issues such as privatization and gentrification, and Mishler’s interview with Samuel Stein, where he elucidates on the real estate state, reveals the collusion between markets and state—particularly its local variants—to maximize profitability at the cost of residents. Furthermore, a sustained critique of capitalism also comes through in the interview between Grant and Bain, where Bain not only questions the value placed on private property, but calls for a wholesale rebuilding that is non-capitalist.

Yet further examination of the ways that capitalism, neoliberalism and the private sector create and perpetuate insecurities is still warranted. How does this happen in collusion with, but also in tension with state in its many manifestations? How are communities both interpolated by but also resisting both market forces and the state? These are important questions to consider, especially in light of the Collective’s understanding of security, which they outline in their prefatory comments as “the political management of risk through, for example, police action, carceral apparatuses, and the construction of borders.”

Indeed, risk management has become a predominant form of governing security, not only because it dovetails well with austerity measures. Risk management is about social sorting the population to determine who is the most risky, and then targeting those populations for exclusion, eg. through refusal at the border or imprisonment. As many before me have observed, this strategy is hugely problematic in that those who are targeted—those who are seen to be a risk—are those who are already most at risk—including the poor and those who are racialized or marginalized along other identity formations. We can see this clearly with respect to COVID19: it is those who are already most at risk who have been more exposed to the most risk of illness and death, or impoverishment.

But if we are going to think about security in terms of risk then it is especially important to consider the market, for the market has been built on and thrives on risk (and many types of risk: capital, currency, equity, etc). Moreover, risk has become even more crucial to markets since the late 20th century with the deregulation of finance and investment, and the push for global ‘free’ trade. Today, perhaps more than ever before, markets flourish in conditions of risk, and have given rise to a whole suite of financial tools (eg options, futures, derivatives) and strategies (eg brokers, consultants) so that risks can be calculated and then monetized for profit.

Therefore, we need to better understand how risk is managed by both states and markets—sometimes hand-in-hand, sometimes in tension—so that we might better challenge the multiple kinds of insecurities that we face in the present. This would mean not only focusing on how states seek to manage risk through containment—through “police action, carceral apparatuses, and the construction of borders”—but also how markets manage risk through capitalization, by anticipating and acting on future uncertainty, and hence foreclosing future possibilities.

The political management of risk—and its corollary, the production and reproduction of insecurity—operates in complex ways. Future uncertainty and the fear that it generates can be wielded to entrench formal political power and regulate and contain the population, while also being generative for economic growth, particularly for large monopolies that can not only bear the brunt of risk, but capitalize upon it. These dynamics are already at play at we continue to address the COVID19 crisis, and in many ways echo what transpired with the 2008 financial crisis, when corporations rebounded quickly from their financial loses, and even increased their profits, while millions—especially the racialized, the poor—were left bereft from defaults and home foreclosures.

The posts in the series “(In)Security in the Time of COVID-19” offer compelling ways of thinking the present through the past, and in so doing point to ways that insecurity can be addressed. They point to how we might imagine better work conditions and access to housing, as well as migration policies that are not racist, while also identifying collective processes through which these outcomes can be achieved. In their attention to data collection and archives, they remind us to constantly reflect on who gets to speak, whose voices get heard, and who gets to make decisions. In so doing, they hold out some hope for learning from the past, so that we can build better and more equitable societies, that might never be without risk—and unfortunately never without some insecurity—but which might, at least, be more open to a future that is not anticipated and capitalized upon by the private sector and the market.

Emily Gilbert is a professor in the Geography & Planning Department at the University of Toronto.