In 1842, at the Dawn settlement near Dresden, Ontario, Josiah Henson built the British American Institute (BAI), a school for peoples who had escaped their enslavement. Five years later, about 75 kilometers from the BAI, on the banks of the Deshkan Ziibiing near London, Methodist missionary Kahkewaquonaby (Peter Jones) – a Mississauga leader from Credit River (western Toronto) – built the Mount Elgin Institute, a manual labour school for Munsee-Delaware and Anishinaabeg children.

Both schools were short lived, failing to live up to the hopes of their founders (though Mount Elgin reopened in 1867 with less community involvement). 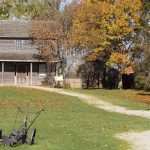 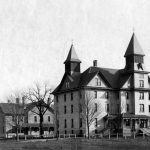 What is important here is the agency deployed by Black and Indigenous people like Josiah Henson and Kahkewaquonaby in seeking out, and controlling, robust systems of education for their communities. 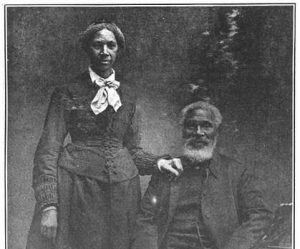 Josiah Henson with his wife Nancy. 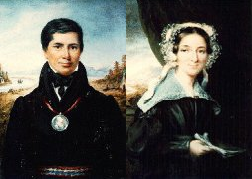 Kahkewaquonaby with his wife Eliza.

Making their situation much more complex, however, is that the educational philosophies these men espoused have common roots with the development of the residential school system as well as two elite American colleges.

Understanding this historical context reveals an important turning point in the history of racism and exclusion in Canadian law and society. In this moment, some Black and Indigenous peoples hoped schooling might help navigate the developing settler colonial state while – at the same time – those efforts were thwarted and co-opted by government and churches to entrench racial hierarchies that privileged White English-speaking settlers. Egerton Ryerson falls right in the middle of these divergent interests.

Though there were other influences, the curricular philosophies of both the BAI and Mount Elgin were anchored in the ideas of Philipp Emanuel von Fellenberg, whose school near Bern Switzerland provided a curricular model for several prominent educators and abolitionists. 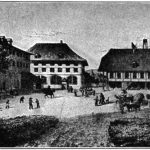 Court of the Agricultural Institute at Hofwyl. From Graves, A Student’s HIstory of Education (1922) 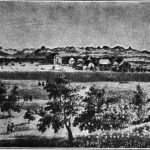 A General View of von Fellenberg’s schools and workshops. From Graves, A Student’s History of Education, (1922)

Built on a 200-acre estate, von Fellenberg used schooling to reduce the cleavages between social classes. His curriculum balanced intellectual work with substantial periods – many hours of the day – engaged in physical labour.

It was von Fellenberg’s school to which Egerton Ryerson – a friend of Kahkewaquonaby and Superintendent for Schools in Canada West – turned in an infamous 1847 letter to George Vardon, an Indian Affairs official in Montreal. His advice, solicited by Vardon, advocated that von Fellenberg’s ideas about manual labour be extended into industrial schools, whose purpose was to bring Indigenous peoples into what he considered “a state of civilization.”

This letter deeply shaped how the Government of Canada approached schooling Indigenous children. It was still drawn upon fifty years later.

By the time that Henson, Kahkewaquonaby, and Ryerson were thinking about building schools, though, the idea that schools could smooth over racial, political, social, and economic tensions was longstanding in the Great Lakes region.

Both the histories of the BAI and Mount Elgin are anchored in events that took place during the preceding century in what is today upstate New York. Through the religious revivalism of the first and second Great Awakenings, the roots of these schools were planted. In the same soil were sown the seeds of Dartmouth and Oberlin Colleges, two elite schools that continue to wield educational influence today.

The Brant family at Six Nations had significant influence in developing schools for Indigenous children.

Schooling was important for Thayendanegea. In his childhood home, at Canajoharie (in present-day New York state), some children went to a school funded by the Anglican Society for the Propagation of the Gospel. By the 1750s, this school was taught by Sahonwagy; he was the second teacher from that community to teach there. 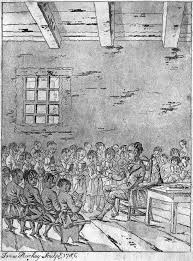 Frontspiece of A Primer for the Use of Mohawk Children/Waerighwaghsawe Iksaongoenwa (London: C. Buckton, 1786). It is likely that this engraving was a representation of the school in Thayendanegea’s home.

Within the next decade some children, including Thayendanegea, were sent down to Eleazar Wheelock’s charity school in Mohegan territory (Connecticut) for more advanced studies.

Because Wheelock used the charity school to build Dartmouth College, the school’s overall influence relative to schools run by Indigenous teachers is often overstated, a point well made by Linford Fisher in The Indian Great Awakening. Nonetheless, during these years the school taught as many as 110 Indigenous students.

This culture of colonial schooling was extensive and complex. This map – a student work in progress, based mostly on this dissertation – indicates schools with Indigenous teachers between 1700 and 1850. It represents over 150 Indigenous people, twenty-five of whom were women. Fisher’s book well demonstrates that, in southern New England, several schools emerged out of the religious revival known as the First Great Awakening.

At the dawn of the nineteenth century, schools were seen by some Indigenous communities as institutions that might be useful for navigating the settler world developing on there Lands. The movement towards residential manual labour schools – with the involvement, and under the direction, of Indigenous leadership – was part of these currents.

This is the context in which Mount Elgin (and the Mohawk Institute) began, and the hope that Kahkewaquonaby held for the institution’s future.

The British American Institute’s trajectory starts with Thayendanegea too, about 70 kilometers from where he grew up. Here, in the village of Whitesboro (yikes!), George Washington Gale founded the Oneida Institute, a manual labour school that became a hotbed of abolition during the 1830s.

The Institute was the second college in the area. In 1793, Samuel Kirkland, a missionary to the Oneida and contemporary of Thayendanegea’s at Wheelock’s charity school, built the Hamilton-Oneida Academy. Despite its name, the school had few Indigenous students (one was Ojibwe historian William Whipple Warren); rather it was the first school in the United States to admit Black men.

Steeped in the theology and activism of Charles Grandison Finney, a foundational figure of the Second Great Awakening, the school’s focus on abolition and integration quickly spread around the Great Lakes.

Theodore Weld and Hiram Wilson, two White students in Oneida’s inaugural class, were pivotal. Entering Lane Theological Seminary in Cincinnati after leaving Oneida, they quickly became caught up in debates over abolition. When the seminary failed to support abolition in 1834, Weld and Wilson rebelled against the school’s administration alongside several others who had also come from Oneida. The two ended up at the newly formed Oberlin College.

Oberlin was explicitly modeled on Oneida and von Fellenberg’s school in Switzerland and quickly became a model for the manual labour school movement developing in the United States.

Steeped in the pedagogical traditions of Oberlin and Oneida, Wilson partnered with Josiah Henson, a self-emancipated slave who, in addition to founding the BAI, is credited with rescuing nearly 120 people from their enslavement.

Together, they envisioned the BAI would develop similarly to Oneida and Oberlin, recognizing that by the 1840s peoples liberated from their enslavement could not safely attend these American institutions. The purpose here was to build a school that ensured Black people in Canada had the same opportunities as their White neighbours.

Egerton Ryerson and A Moment of Hope Thwarted

Although both movements were grounded in a philosophy that sought equity within the burgeoning colonial system, the legacy of imperial-colonial relationships in North America, embodied in the Indian Department, meant that the state would always treat Indigenous peoples differently than all other populations.

Indeed, Ryerson’s report built upon the 1844 Bagot Commission, which recommended manual labour and industrial schools for the purposes of “weaning [Indigenous children] from the habits and feelings of their ancestors.” Ryerson’s letter to Vardon makes it clear that he was asked by the department for advice about how to establish Industrial schools.

Nonetheless, the timing of Ryerson’s letter makes the point. Shortly before he sent his advice to Vardon about how to school Indigenous children, he had submitted a much more extensive report to the Canadian Governor General proposing “A System of Public Education for Upper Canada.” The report laid the ground work for public schooling in Canada.

Though he almost certainly held views similar to Kahkewquonaby, Henson, and von Fellenberg, by the late-1840s, Ryerson’s development of industrial schools was distinct from the manual labour movement. In outlining a separate curriculum for Indigenous children, Ryerson prepared the ground for the inequities between Indigenous and settler schools that later developed. The result of his two different reports was that neither Mount Elgin – nor any other school for Indigenous children – was managed as part of a settler-public school system.

Ryerson viewed Black children differently. Black communities were explicitly included in the 1850 Common Schools Act. Their inclusion, though, was focused on their potential racial segregation. The Act’s 19th article allowed any twelve rate payers to petition for separate schools based on skin colour or religion.

In his vision for public education, Ryerson laid out a future for the colonial education system; in it there is no mention of race or Indigenous peoples. In pointing to a very separate Industrial schooling system for Indigenous children, and setting out the conditions for local racially-based segregated schools, Ryerson demonstrates that – at least in some places in Canada – by the 1840s, schooling for Indigenous, Black, and colonial children would take separate paths.

Interconnected Histories and the Importance of Context

In the early manual labour school movement – the very roots of the residential school system that developed in the 1880s and lasted until the 1990s – there was a hope that community-governed schools might help navigate the evolving White-Anglo-settler world developing around Black and Indigenous communities.

As a key moment in Canada’s formation, though, these mid-nineteenth-century schools reveal paths taken and not taken.

These schools’ histories teach us about the hopes of peoples whose worlds were radically changing and how aspirations for equitable schooling were co-opted or compromised to ensure that racial and economic hierarchies were protected.

If we want to see change – building a society that is inclusive, equitable, and safe for everyone – we must understand how these institutions worked together to build systems of inequity, oppression, and genocide. The histories of the British American and Mount Elgin Institutes provide a useful place to start.

Thomas Peace is an associate professor of history at Huron University and co-director of the Huron Community History Centre. An earlier version of this paper was delivered at the 2019 Congress of the German History of Education Association at Bielefeld University. Special thanks to Jason Ellis and Alison Norman for their helpful feedback on the initial text.